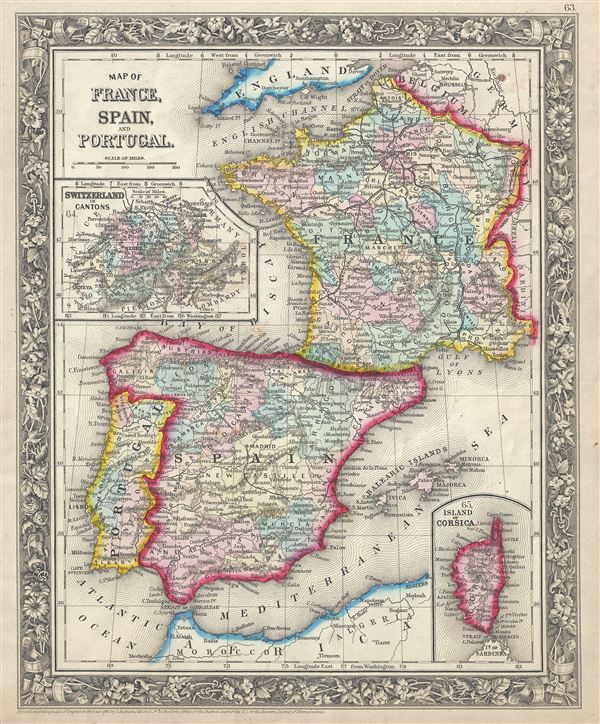 This is a beautiful example of American map publisher Samuel Augustus Mitchell Jr.'s 1860 map of France, Spain and Portugal, as well as the Balearic Islands of Ibiza, Majorca, and Minorca. . An inset in the upper left quadrant focuses on Switzerland. Another inset map in the lower right quadrant depicts the Island of Corsica. This map also identifies various cities, towns, rivers and an assortment of additional topographical details.

Map is color coded according to political boundaries with elevation rendered by hachure. The whole is surrounded by the attractive floral border common to Mitchell atlases between 1860 and 1866. One of the most attractive American atlas maps of this region to appear in the mid-19th century. Prepared by S. A. Mitchell Jr. for inclusion as plate 59 in the 1860 issue of Mitchell's New General Atlas. 'Entered according to Act of Congress in the Year 1860 by S. Augustus Mitchell Jr. in the Clerks Office of the District Court of the U.S. for the Eastern District of Pennsylvania.'

Mitchell Jr., S. A., Mitchell's New General Atlas, Containing Maps Of The Various Countries Of The World, Plans Of Cities, Etc. Embraced In Forty-Seven Quarto Maps, Forming A Series Of Seventy-Six Maps And Plans, Together With Valuable Statistical Tables, 1860 edition.