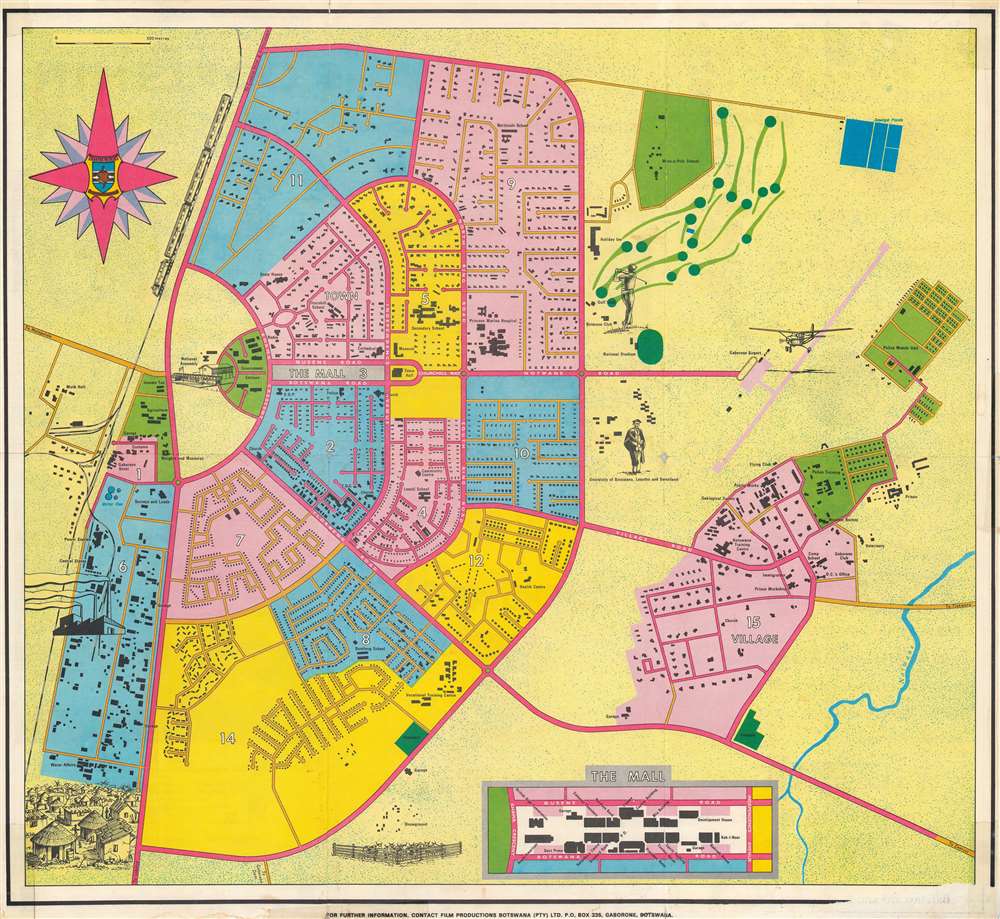 A rare city map of Gaborone, the planned capital of Botswana.
$900.00

This is a c. 1975 Film Productions Botswana (PTY) city plan or map of Gaborone, Botswana, planned and constructed in the 1960s to serve as the capital of the newly independent Botswana. Featuring bright Botswanan colors, Gaborone is divided into fifteen wards, many of which serve a specific purpose. For example, the railroad station and hotels are all located in Ward 1, while offices and shops are all situated in Ward 2. Ward 3 hosts the government center, known as The Mall, and an industrial zone is housed in Ward 6. Ward 15, outside the planned city, labeled here simply as 'village' represents the original city of Gaborones, preexisting the new capital. Numerous buildings are labeled, including hotels, stores, the power station, numerous churches and schools, and the city hospital. The University of Botswana, Lesotho, and Swaziland is illustrated outside the planned city, as are the golf club and the airport.

A Short History of Gaborone

In the early 1960s, when the British Protectorate of Bechuanaland, in southern Africa, was on the verge of independence, local officials realized that they lacked a city suitable for a national capital. The colony's administrative center had been in South Africa, not an option after independence. Thus, the decision was made, and heartily embraced, to build a new city. At the time, the construction of planned cities was a popular phenomenon worldwide. Brasilia, the new capital of Brazil, was completed in 1960, and Chandigarh, planned to be the joint capital of the Indian states of Punjab and Haryana, was in the process of being built and would be completed in 1966. Gaborones, a small village located near the South African border situated on a well-watered piece of their arid country, was selected and construction began in mid-1964. Gaborones was imagined as ordered city in stark contrast to the chaos of African capitals. Over the next three years, over 2,000 workers moved 250,000 blocks of concrete, and, although unfinished, the city was functional when Botswana gained its independence on September 30, 1966. The city's name was changed from Gaborones to Gaborone in 1969.

This map was created and published c. 1975 by Film Productions Botswana (PTY) Ltd. likely on behalf of the local chamber of commerce. Three examples are catalogued in the OCLC as being part of the institutional collections at the Library of Congress, the University of Wisconsin-Madison, and the University of the Witwatersrand.