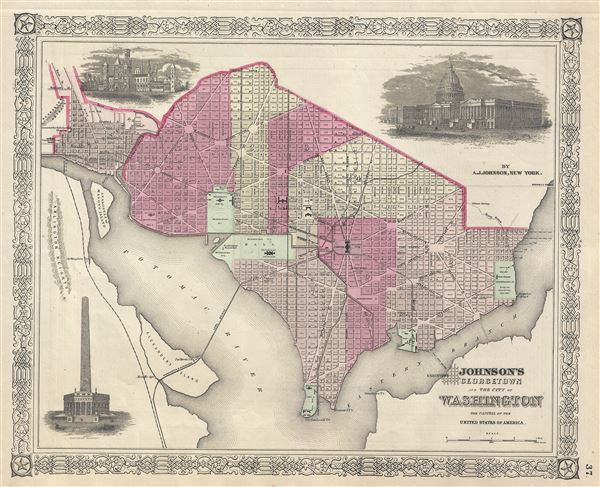 This is a beautiful example of A. J. Johnson's 1866 map of Washington D.C. and Georgetown. It offers a fascinating snapshot of the nation's capital shortly after the close of the American Civil War. Shows the city in considerable detail with color coding according to ward. Notes numerous important buildings including the Capitol, the Smithsonian Institution, the White House (not yet called the White House), the Washington Monument, the National Observatory, the Navel Yard, the Poor House, the City Hall, and others. Shows the grid and ray structure according to L'Enfant's brilliant plan. Georgetown appears as a separate entity in the upper left corner with Georgetown College noted just outside the city border. Also shows proposed landfills and extensions to the east side of the city into the east branch of the Potomac River.

Though ostensibly based on Colton's map of Washington D.C. published in 1855, Johnson add a number of updates and embellishments including three engraved views. The grand dome of the Capitol Building, shown complete in the upper right hand quadrant of this map, was only partially complete when this map was issued. The Washington Monument appears in an earlier unrealized conceptualization in the lower left quadrant. The Smithsonian Institution, now the nation's largest museum, is pictured in the upper left quadrant.

Features the fretwork style border common to Johnson's atlas work from 1864 to 1869. Published by A. J. Johnson as plate number 37 in the 1866 edition of Johnson's New Illustrated Family Atlas.