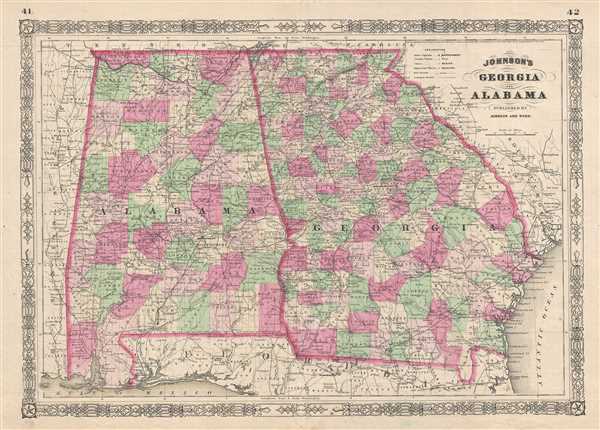 Classic map of Georgia and Alabama.

This is A. J. Johnson's beautifully hand colored 1865 map of Georgia and Alabama. This map shows cities, topographical features, railways, ferries and roads with color coding at the county level. Published by A. J. Johnson and Ward as plates 41-42 in the 1865 edition of Johnson's New Illustrated Family Atlas.

Johnson, A. J., Johnson's New Illustrated Family Atlas of The World with Physical Geography, and with Descriptions Geographical, Statistical, and Historic including The Latest Federal Census, A Geographical Index, and a Chronological History of the Civil War in America, (last Johnson and Ward), 1865.

Very good. Original centerfold shows some wear. Even overall toning. Some spotting and stains on bottom margin. Text on verso.