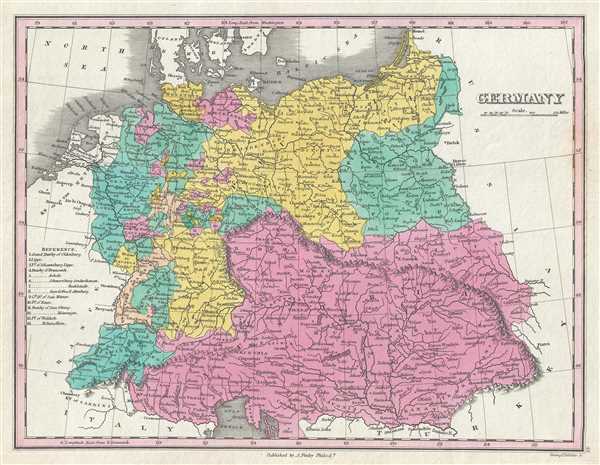 This is an 1828 Anthony Finley map of Germany. The map depicts from the North and Baltic Seas south to the Gulf of Venice and from France, Luxembourg, and the Kingdom of the Netherlands to Russia. Illustrating 'Greater Germania,' the disparate German republics, Prussia, Poland, Bohemia, Hungary, Switzerland and Austria are included. Cities, such as Dresden Warsaw, Krakow, Prague, Innsbruck, Trieste, Milan, Vienna, Hanover, and Berlin are labeled. Rivers, roads, monasteries, and some topographical features, such as the Bohemian Mountains, are illustrated. Color coding is present, indicating the various different kingdoms, duchies, principalities, and states, some of which are listed in a reference table along the left border.