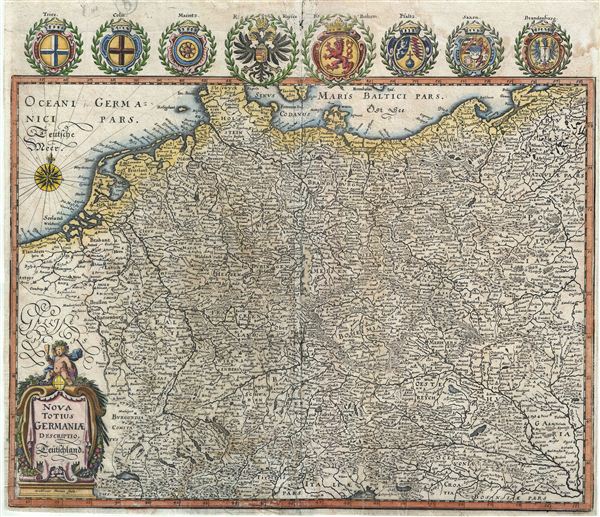 This is a beautiful example of Matthuas Merian's c. 1649 decorative map of the Holy Roman Empire. It covers the include the modern day countries of Germany, Poland, Switzerland, Austria, Netherlands, Belgium, Czech Republic and parts of Poland and Hungary. It features a beautifully decorated title cartouche in the bottom left quadrant. The top margin features illustrations of the eight provincial coats of arms, including the imperial janiform eagle of the German Empire, the lion of Bohemia, and others. A compass rose decorates the upper left quadrant. Drawn just after the end of the Thirty Years War, it depicts the Holy Roman Empire in great detail. Various towns, cities, rivers, and other topographical elements are noted. This map is based on an earlier map of the same title drawn by William Blaeu. This map was created by Matthuas Merian in c. 1649.

Matthäus Merian (September 22, 1593 - June 19, 1650) was a important Swiss engraver and cartographer active in the early to mid 17th century. Merian was born in Basel and studied engraving in the centers of Zurich, Strasbourg, Nancy and Paris. In time Merian was drawn to the publishing mecca of Frankfurt, where he met Johann Theodor de Bry, son of the famed publisher Theodor de Bry. Merian and De Bry produced a number of important joint works and, in 1617, Merian married De Bry's daughter Maria Magdalena. In 1623 De Bry died and Merian inherited the family firm. Merian continued to publish under the De Bry's name until 1626. Around this time, Merian became a citizen of Frankfurt as such could legally work as an independent publisher. The De Bry name is therefore dropped from all of Merian's subsequent work. Of this corpus, which is substantial, Merian is best known for his finely engraved and highly detailed town plans and city views. Merian is considered one of the grand masters of the city view and a pioneer of the axonometric projection. Merian died in 1650 following several years of illness. He was succeeded in the publishing business by his two sons, Matthaus and Caspar, who published his great works, the Topographia Germaniae and Theatrum Eruopeaum, under the designation Merian Erben (Merian Heirs). Merian daughter, Anna Maria Sibylla Merian, became an important naturalist and illustrator. Today the German Travel Magazine Merian is named after the famous engraver.

Average. Blank on verso. Wear along original centerfold. Narrow margins all around, as issued. Even overall soiling and some spotting. Professionally flattened and backed with archival tissue.
Looking for a high-resolution scan of this?