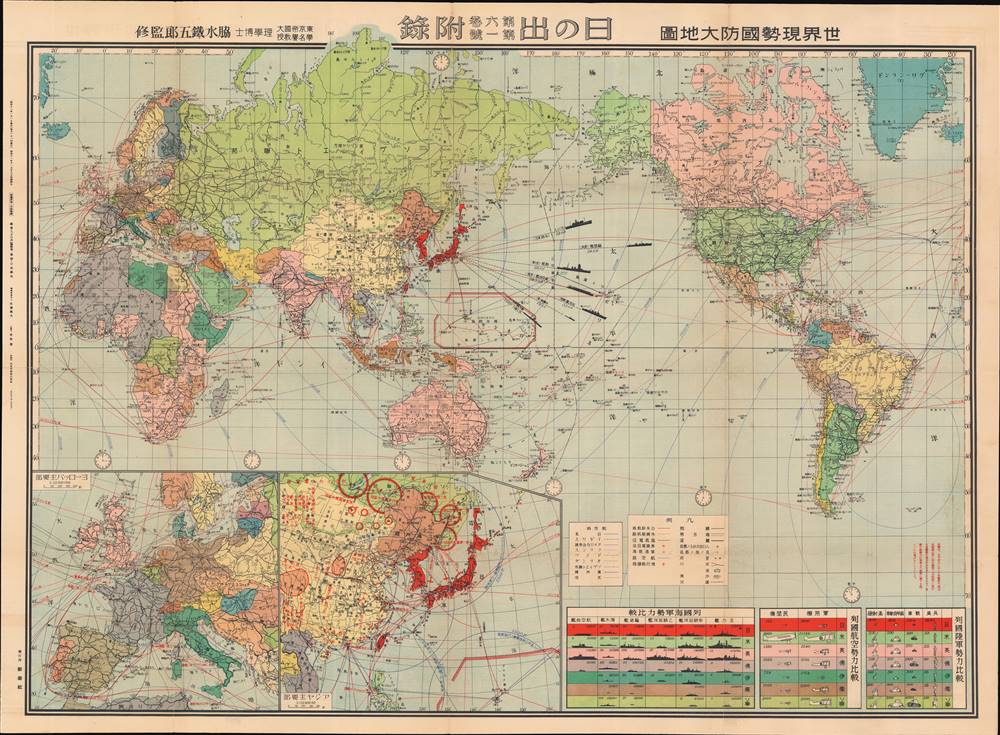 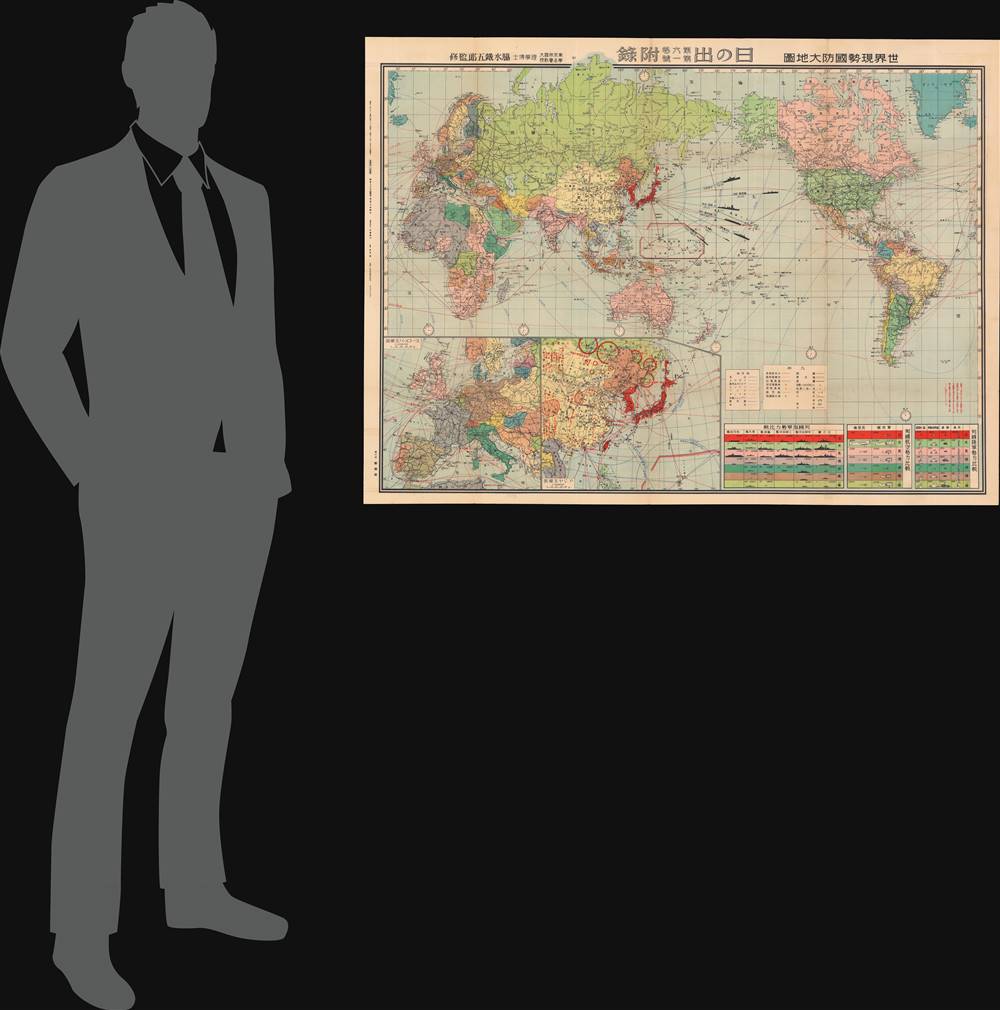 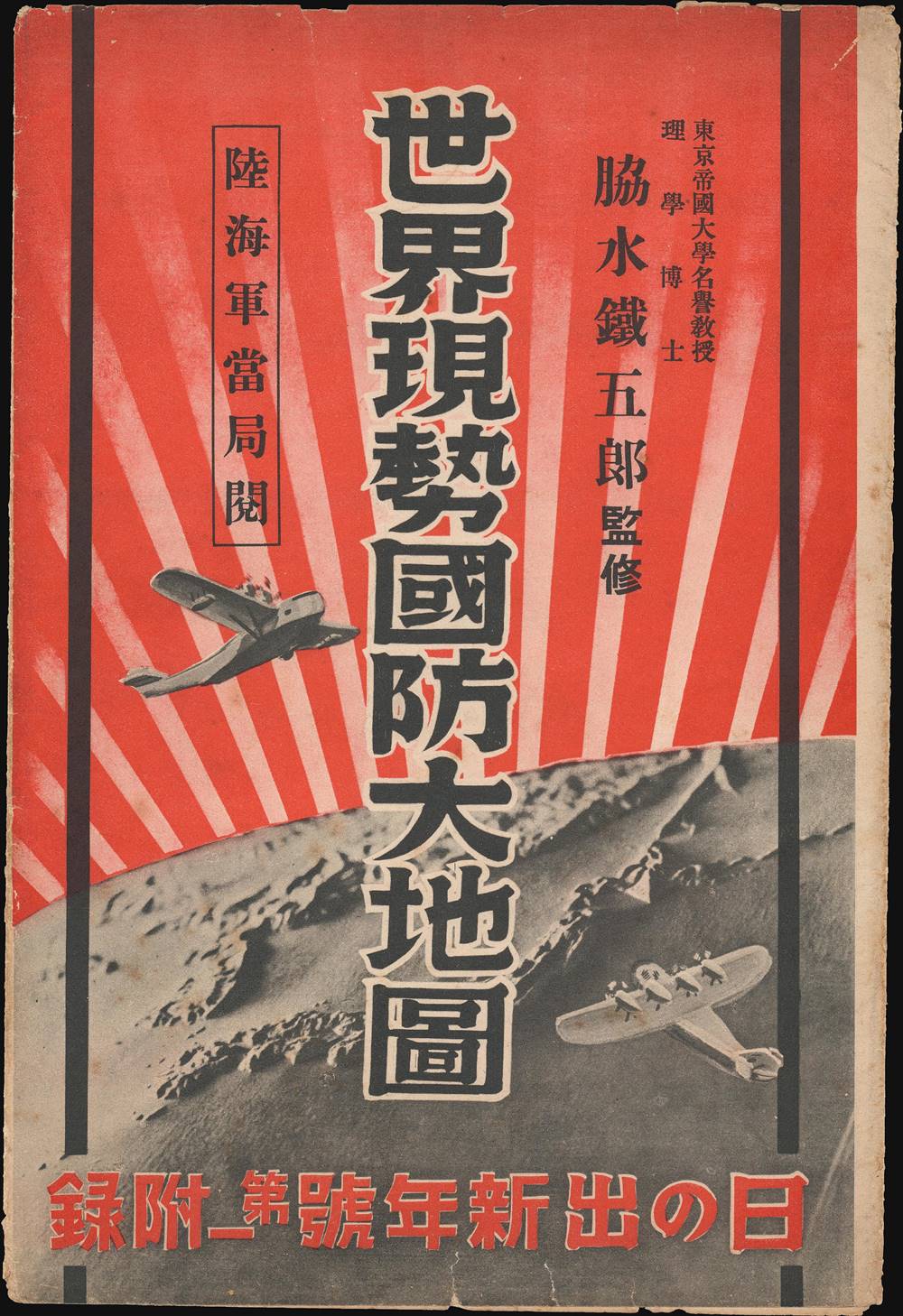 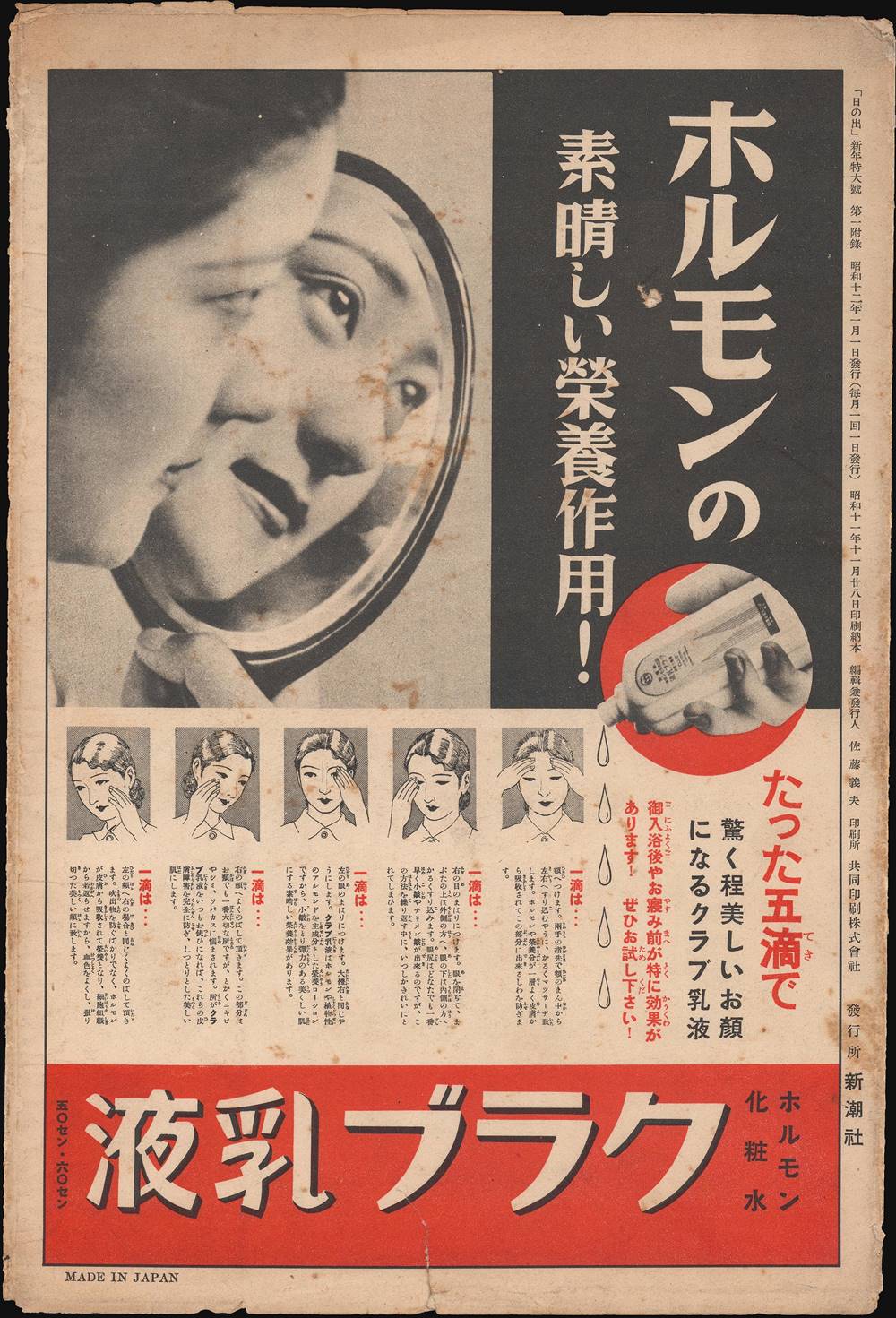 This is a rare 1936 world map published in Hinode (日の出), a popular Japanese magazine, showing the comparative military strength of major world powers. The map augurs Japan's coming conflicts with China in 1937 and Western powers in 1941.

The map, very similar to maps that appeared in the 1930s in King magazine, Hinode's main competitor, shows the comparative military strength of major world powers - a subject of growing public interest in Japan. The symbols noted in the legend indicate undersea and wireless telecommunications, railways, sea and air routes, ports, airports, large and capital cities, canals, and geographic features. A special, secondary legend to the left indicates the lines representing air routes of different countries (from top to bottom: Japan, England, U.S.A., France, Germany, Holland, the Soviet Union, Manchukuo, and others).

Below Eurasia sit inset maps of Europe and East Asia. The latter shows the location and range of fighters flying from Soviet airfields in Siberia and Mongolia, along with bombers from Vladivostok and American airfields in Shanghai, Manila, and Guam. The map also notes foreign fleets stationed in East Asia and the land forces of the Soviet Union and China, including the Chinese Communists (areas shaded with diagonal red lines).

In contrast to the belligerent tone of the map, the verso (back) is a placid advertisement for face lotion made by the cosmetics giant Club (クラブ). The headline reads 'The great nourishing effect of hormones!' and the text and illustrations below show the process for applying the recommended five drops of lotion. These seemingly dissonant images represent the home front experience in the early years of the war, when Japanese armies went from one victory to another and before shortages and American bombing caused widespread suffering.

The cover gives the map's title and basic publication information, with military aircraft flying over the portion of a globe including Japan, Korea, and Manchuria, and the rays of the rising sun (a common symbol of Japan's empire) emanating in the background.

After a quick glance at this map, it is easy to see how the world, and East Asia in particular, was primed for a major conflict. Indeed, Japan and China were engaged in a full-scale war by the summer of 1937 (the Second Sino-Japanese War). Four main factors contributed to this situation: the first was militarism and hypernationalism in Japan, which had led to an unashamedly expansionist foreign policy, the second was the rising economic and military power of Japan in the context of a world system dominated by European powers, the third was the increasing tension between the Soviet Union on the one hand and anti-Communist fascist or militarist powers (including Japan) on the other, and the fourth was the domestic political situation in China.

At this time, China was only loosely unified by the Nanjing Government led by Chiang Kai-Shek. Popular opinion strongly favored a war with Japan, which had seized Manchuria in 1931 and was gradually picking off territory in northern China. However, Chiang wanted time to improve his military, better unify the country, and eliminate the Communists before seeking a wider war with Japan. In December 1936, just before this map's publication, Chiang was kidnapped by one of his own generals during a meeting in Xi'an and forced to enter a United Front with the Communists. From that point, Chiang was (somewhat unwillingly) focused on preparing, as best as possible, for a conflict with Japan.

For its part, the Japanese government and military saw Chiang as a closet Communist in league with the Soviets (especially after the Xi'an Incident) and believed Communist movement was rampant in China, directly threatening Japan's interests throughout East Asia. Because of the treaty ports, foreign military forces were also stationed in China, not to mention European and American colonies and protectorates in the region, adding to overall tensions. The complex but clearly worsening foreign relations with Western powers led to several 'incidents' in the 1930s, which only increased with the start of the Second Sino-Japanese War, when Western civilians, troops, and sailors were caught in the crossfire and killed by Japanese forces.

Although Japan had left the League of Nations and adopted an increasingly strident attitude in foreign relations, it was still sensitive to relations with the Western powers, due to important economic ties with them. Japan was also disadvantaged by the terms of the Nine Power Treaty of 1922, which had capped its naval forces, although it had been skirting the treaty for several years and withdrew from it entirely in early 1936. Although distracted by domestic economic troubles and the situation in Europe, the U.S., Great Britain, and other Western powers were deeply opposed to Japan's invasion of China in 1937 and later moves into Indochina, and gave increasingly overt support to Chiang's government, leading ultimately to sanctions and an oil embargo on Japan, and the Pearl Harbor attack.

This map, showing Japanese naval vessels steaming towards Hawaii and the West Coast of the United States, leaves little doubt as to the likely battlefields of any conflict between Japan and the U.S. At the same time, the tables of comparative military strength at bottom show how misguided such an attack would be, a fact well-understood but rarely discussed by Japan's military leaders in the lead up to Pearl Harbor.

Hinode (日の出) was a popular magazine published by Shinchōsha (新潮社) between 1932 and 1945. It was planned as a competitor to King magazine, published by Kodansha (講談社), and the map bears a striking resemblance to maps of the comparative military strength of major world powers that were published in King in the 1930s. The appearance of these maps correlates with increasing militarism and hypernationalism in Japanese society across the 1930s, and, in retrospect, was a portent of the coming war with China in 1937, the collapse of civilian government, and the Pacific War.

This map appeared as a supplement to the January 1 New Year's issue of Hinode (日の出) magazine. The original edition was printed on January 28, 1936, and was thereafter published and republished monthly as a supplement to Hinode. The map's production was overseen by Wakimizu Tetsugorō (脇水鐵五郎), a geologist and professor at Tokyo Imperial University, and it was reviewed by the Imperial Army and Imperial Navy. It was compiled by Kawamata Tetsuya (川俁鐵也) of the Editorial and Drafting Department of Hinode, published by Shinchōsha, with the publishing house's president, Satō Yoshio (佐藤義夫), listed as editor and publisher, and printed by Kimijima Kiyoshi (君島潔) of the Kyodo Printing Co. (共同印刷株式會社). It is held by the National Diet Library and the British Library, and is very scarce to the market.

Wakimizu Tetsugorō (脇水鐵五郎; December 4, 1867 – August 10, 1942) was a prominent Japanese geologist and soil scientist, as well as a professor at Tokyo Imperial University (now Tokyo University). He was born in Ogaki, near Nagoya, and studied geology at Tokyo Imperial University, where he would spend his entire career, save for several years in the 1910s when he studied abroad in Europe and the United States. Learn More...


Shinchōsha (新潮社; 1896 – present) is a major Japanese publishing house with roots dating back to the Meiji period, with the founding of Shinseisha (新聲社) by Satō Yoshisuke (佐藤義亮). After some financial difficulties, Satō transferred Shinseisha to his business partner and founded Shinchosha in 1904 and launched an eponymous literary magazine that developed a reputation as one of the premier literary magazines in Japan. Learn More...


Kyodo Printing Co. (共同印刷株式會社; 1897 - present) traces its roots back to the Meiji period, when the owner of the publisher Hakubunkan (博文館), Ōhashi Sahei (大橋佐平), founded an offshoot company called the Hakubunkan Printing Factory (博文館印刷工場). In 1925, it merged with Seimido (精美堂) to form Kyodo. For many years, Kyodo competed with Dai Nippon Printing (大日本印刷) and Toppan (凸版印刷) among for the top-spot among comprehensive publishers. Learn More...


Kimijima Kiyoshi (君島潔; fl. c. 1909 - 1940) was a Japanese printer employed by the Kyodo Printing Co. (共同印刷株式會社) who was involved in the printing of maps and other works by Kyodo, and also published articles in trade publications such as Japan Printing World (日本印刷界) and Japan Printer (印刷雑誌). Learn More...