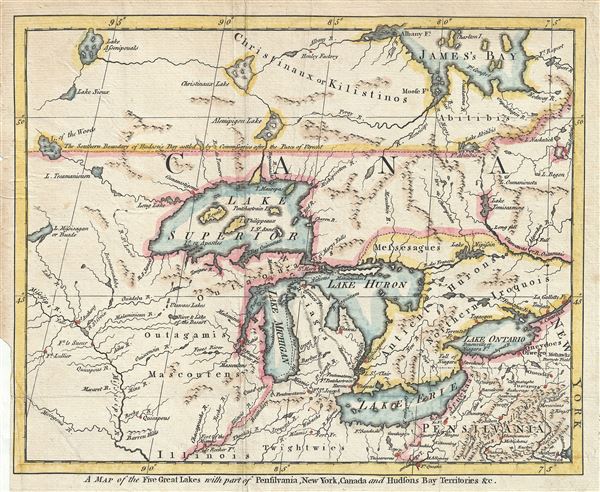 An interesting and uncommon 1755 French and Indian War Era map of the Great Lakes issued for the London Magazine. Centered on Lake Michigan, this map covers from St. James Bay to Pennsylvania and from the Mississippi River to New York, including all five of the Great Lakes. Numerous rivers are named and topography is rendered both by profile and shading (as in the unusual plateau in central Michigan).

Issued at the height of the French and Indian War, this map illustrates one of the most active theaters of war, with numerous fortifications and American Indian nations identified. Among the most important of these is for Quesne (For Duquesne), which inches into the border of the map at the Forks of the Ohio River. This fort was perceived as critical to controlling trade on the Ohio and its occupation of by the French significant heightened aggression in the region.

Cartographically this map follows many of the conventions, including the four fictional islands in Lake Superior, laid down by Jacques-Nicholas Bellin in his influential 1744 map of the same region. Bellin's apocryphal islands include: Philippeux, Pontchartrain, Maurepas, and St. Anne. These islands were invented three years earlier by the French historian and traveler Charlevoix, then subsequently immortalized by the cartographer Jacques-Nicholas Bellin. The islands were intended to honor Charlevoix' s personal patron, the Count of Maurepas, Jean-Frederic Phelypeaux. The largest of the three islands, Philippeaux, is named directly after the count. The second largest island, Pontchartrain, refers to Phelypeaux's family estate. The third island, which may in fact be a mismapping of the factual State Islands, is named after the count's seat, Maurepas. The fourth and smallest of the islands, St. Anne, references the count's patron saint. Charlevoix described the islands as being rich in minerals leading numerous explorers to search for them in vain. Bellin dutifully introduced the four islands to his map, and such was his influence that they were subsequently copied by most subsequent cartographers, including John Mitchell in his seminal 1755 wall map of North America. The highly regarded Mitchell map was used in negotiating the 1783 Treaty of Paris that formally concluded the American Revolutionary War. Therein, the apocryphal Philippeaux was assigned as a marker for the new United States - British America border thus setting the stage for later political strife.


Richard Baldwin (December, 1724 - January, 1770) was an English bookseller and publisher active in London during the middle part of the 18th century. Baldwin is best known as the publisher of the London Magazine: or, Gentleman's Monthly Intelligencer, a monthly periodical. The London Magazine chronicled some of the most important events in the 18th century including the French and Indian War and the American Revolutionary War. It was also notable for being well illustrated by with maps by Thomas Kitchin and others. Upon his death in January of 1770, control of the London Magazine passed to his son Robert Baldwin (fl. 1746 - 1810). Eventually the firm was renamed Baldwin, Cradock & Joy, then simply Baldwin and Cradock. Learn More...