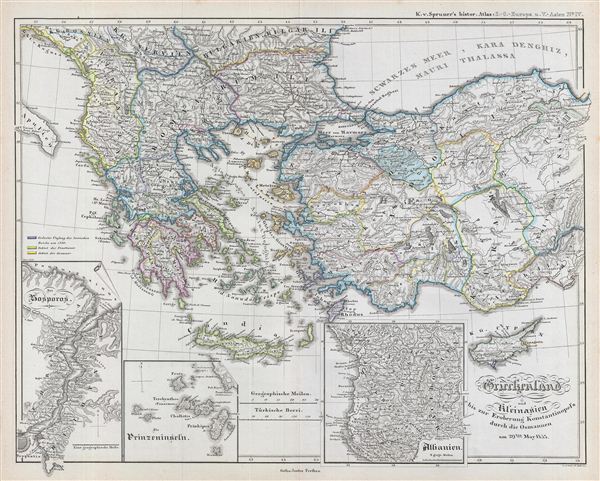 This is Karl von Spruner's 1854 historical map of Greece and Asia Minor (Turkey) at the Fall of Constantinople, May 29, 1453. The map coves Greece and Turkey from Bulgaria in the north to Crete and Cyprus in the south and as far as the Sultanate of Ssiwas in the east. The map contains three insets detailing the Bosporus, Prince Islands (Kizil Adalar) and Albania. On May 29th, 1453, the Ottoman empire captured the Byzantine capital city of Constantinople. This proved to be the final blow that ended the Byzantine empire, which dominated the region for nearly 1500 years and was one of the most powerful forces in europe. The whole is rendered in finely engraved detail exhibiting throughout the fine craftsmanship of the Perthes firm. Prepared by Karl Spruner for publication as plate SO IV in the second edition of Justus Perthes' 1854 Historich-Geographischer, Hand-Atlas zur Geschichte der Staaten europa's vom Anfang des Mittelalters bis auf die Neueste Zeit.