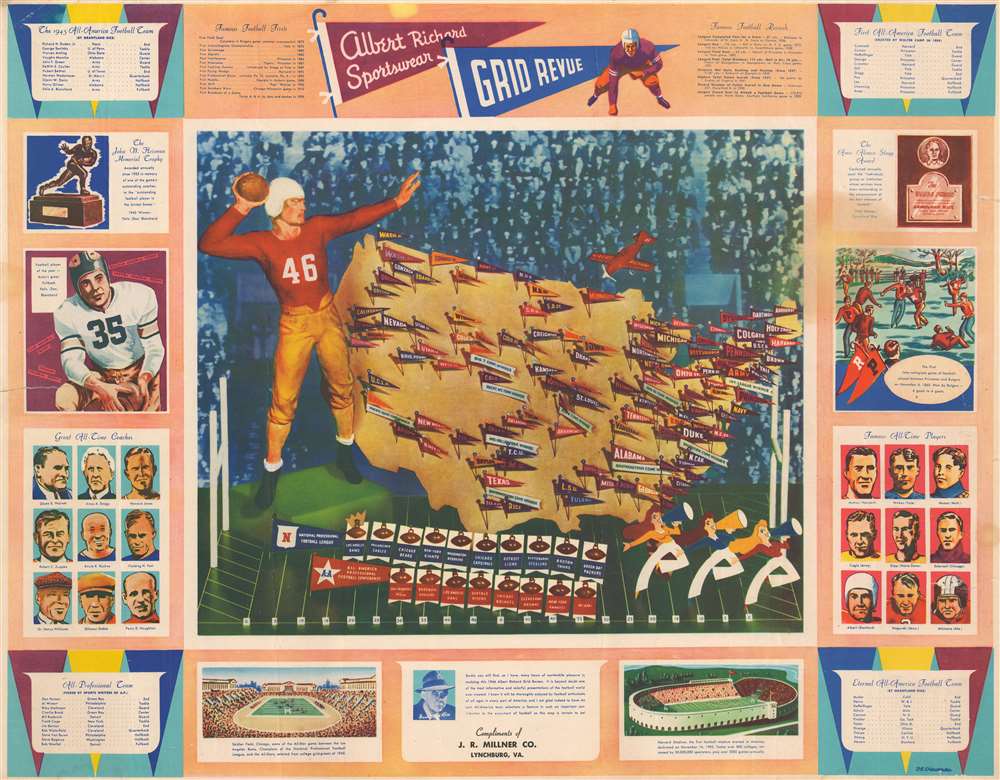 This is a scarce 1946 F.E. Cheeseman pictorial map of United States college football teams - possibly the rarest of the series. The map depicts the continental United States from the Pacific Coast to the Atlantic Seaboard and from the Canadian border to the Mexican border and the Gulf of Mexico. Pennants, stuck into the map of the United States as if it were a cork board, mark the location of a plethora of American college football teams, with many of the most successful teams present. Smaller white banners with green text mark the conference winners which include Army, Indiana, Oklahoma, Texas, Denver, Colorado College, U.S.C., Alabama, and Duke. The map is situated 'above' a football field, with a quarterback to the left and three cheerleaders in the bottom right corner. The teams in the National Professional Football League and the All-America Professional Football Conference are recognized below the map. The whole is framed by numerous different graphics and tables providing information about the history of college football and about the previous season. For example, a portrait of the 1945 Heisman Trophy Winner Army fullback Felix (Doc) Blanchard, is included on the left just above nine portraits of 'great all-time coaches'. Portraits of famous all-time players are on the right, below an illustration of the first inter-collegiate game of football played between Princeton and Rutgers in 1869. Sketches of the All-Star game between the Los Angeles Rams and the College All-Stars and of Harvard Stadium, the first football stadium built in America, are situated along the bottom.

This map was created by F.E. Cheeseman and for distribution by the Albert Richard Sportswear Company. Editions of this map were published from 1938 through 1941, and evidently in 1946. This is the only known example of the 1946 edition.