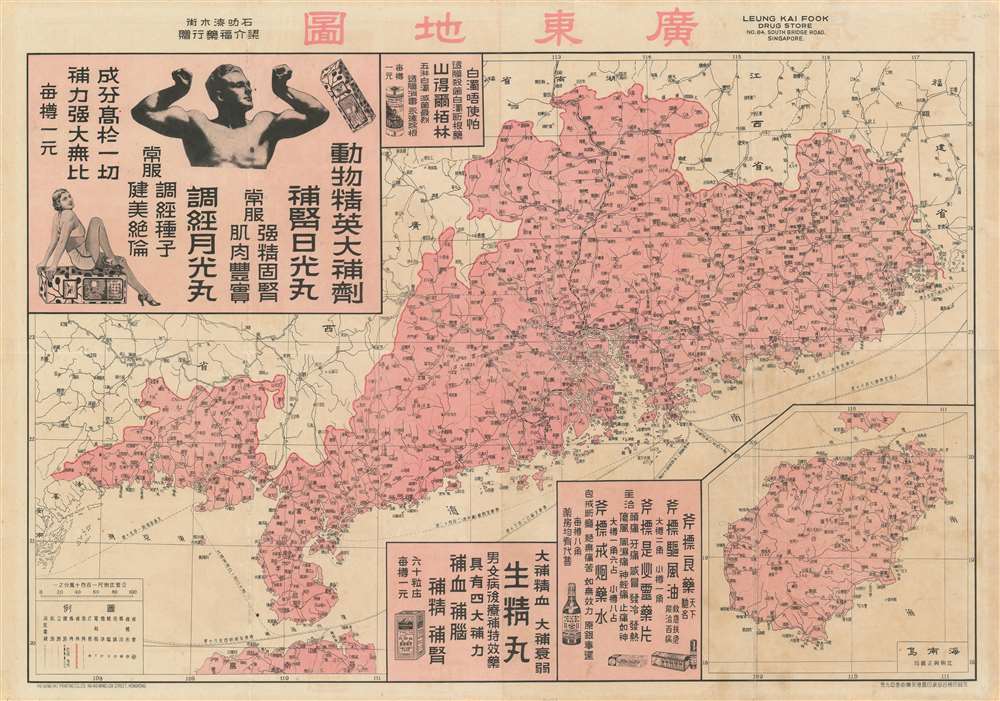 A promotional map of Canton / Guangdong / Hong Kong issued by the Leung Kai Fook Drug Store. The map is centered on the city of Guangzhou (Canton), but covers the entire province of Guangdong as well as the adjacent island of Hainan. The map's most engaging and curious elements are advertisements for various traditional Chinese medicines promising strength, power, freedom from addiction, pain relief, and more. The map was probably intended to be distributed as a flyer at Leung Kai Fook stores in Hong Kong.

Among the Chinese pharmaceuticals advertised here are 'Sandal Berlin Gonorrhoa Pill,' Leung Tsan Kee Anti-Opium Remedy,' 'Axe Brand Universal Oil,' and some sort of animal-based power oil (the main advertised product with Atlas). The advertisements incorporate out-of-place Caucasian figures, among them the 1930s Italian-American fitness icon Charles Atlas. We find the use of Caucasian models to promote strength and vigor to a primary Chinese client base curious and incongruous by modern standards, but in line with contemporaneous trends.

The Leung Kai Fook Drugstore was a Singapore based Chinese pharmaceutical company with annexes in Hong Kong and Shanghai. The firm was founded by Leung Yun Chee in 1928. Lee was sent to Singapore from his native China to develop business for a silk company. Their signature product was then and remains 'Axe Brand Universal Oil' a cure-all compounded from an assortment of 'secret' ingredients.

This map was commissioned by Leung Kai Fook Drug Store and printed in Hong Kong by the Wing Fat Printing Company. Remarkably, both firms still exist. This map, however, remains one-of-a-kind with no other examples catalogued.

Wing Fat Printing Company Ltd. (永發印務有限公司,1913 - 1996) is a Hong Kong based printing concern. The firm was founded in Hong Kong in 1913. The rapidly evolved into a major packaging and printing concern. In 1996 it was merged with Shanghai Industrial Investment (Holdings) Co. Ltd.

Very good. Slight wear on old fold lines.
Looking for a high-resolution scan of this?