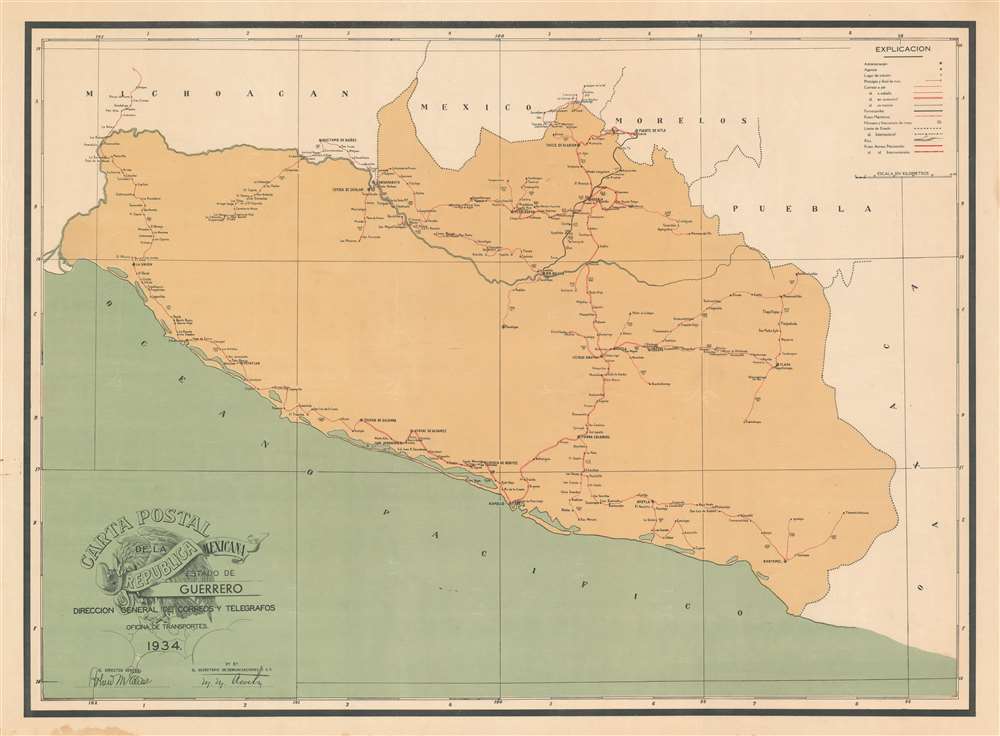 Mail routes delivered on foot, on horseback, and by car are traced throughout the state.
$950.00

This is a 1934 General Directorate of Post and Telegraphs map of Guerrero (Acapulco), Mexico postal routes. Mail is delivered in three different ways in Guerrero: on foot, on horseback, or by car, all of which are depicted by red lines. Each mode of delivery is illustrated by a different type of line, allowing the viewer a better overall understanding of how mail is delivered around the state. Vertical lines are drawn at the beginning and end of each route as well, marking the beginning of the route (one vertical line) and the end (two vertical lines). Dashed red lines mark routes that are delivered on foot, while single solid lines trace routes delivered on horseback, and two parallel solid lines highlight routes delivered by car. Cities, towns, and villages along each of the routes are labeled. Each route is numerically identified by a four-digit number. In Guerrero, these numbers all begin with the numbers two and three. The frequency of delivery is also indicated, with 52 marking routes that are delivered once a week, 104 twice weekly, 156 thrice weekly, 313 weekdays, 365 daily, 730 twice daily. The solid black line marks the railway between Rio Balsas and Puente de Ixtla, over which mail is delivered twice daily.

This map was created and published by the General Directorate of Post and Telegraphs of the Transport Office in 1934. Scarce on the market.

Very good. Closed margin tears professionally repaired on verso. Exhibits soiling in margins but does not effect printed area. Blank on verso.
Looking for a high-resolution scan of this?