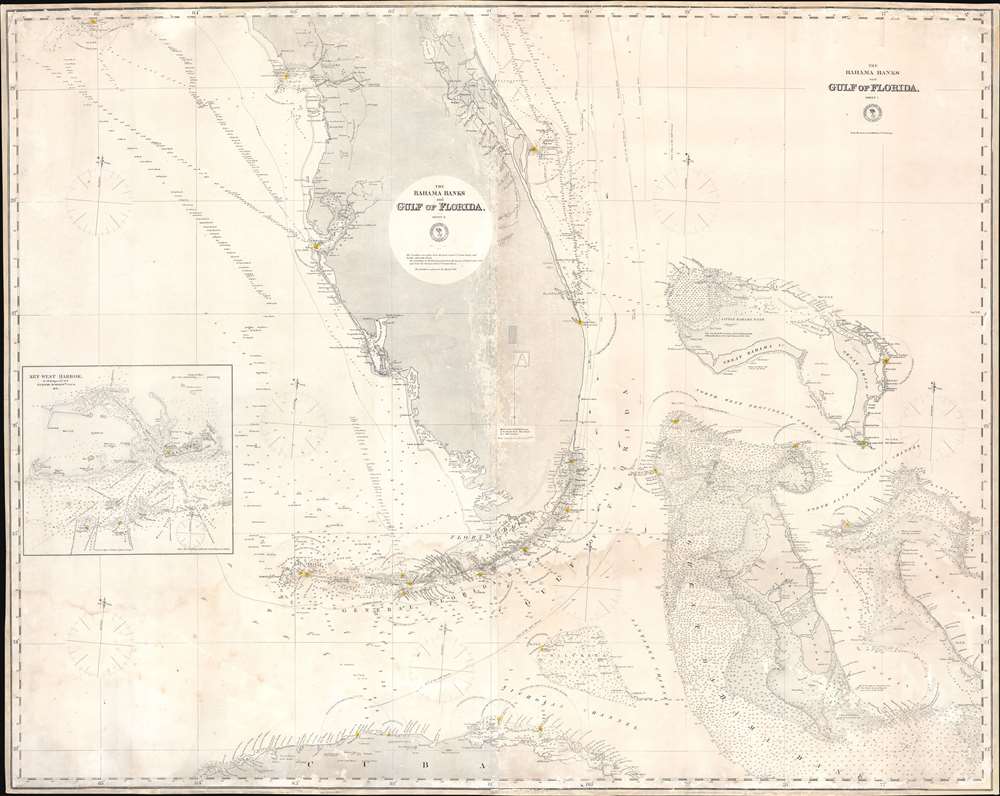 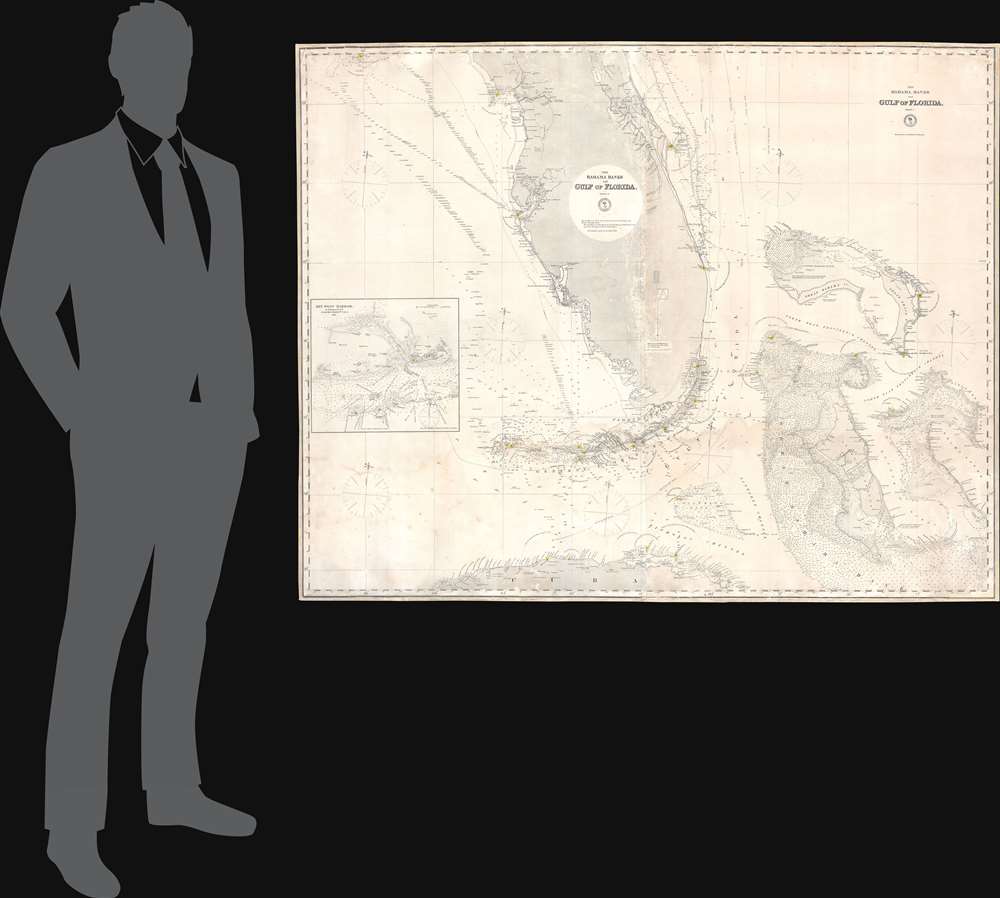 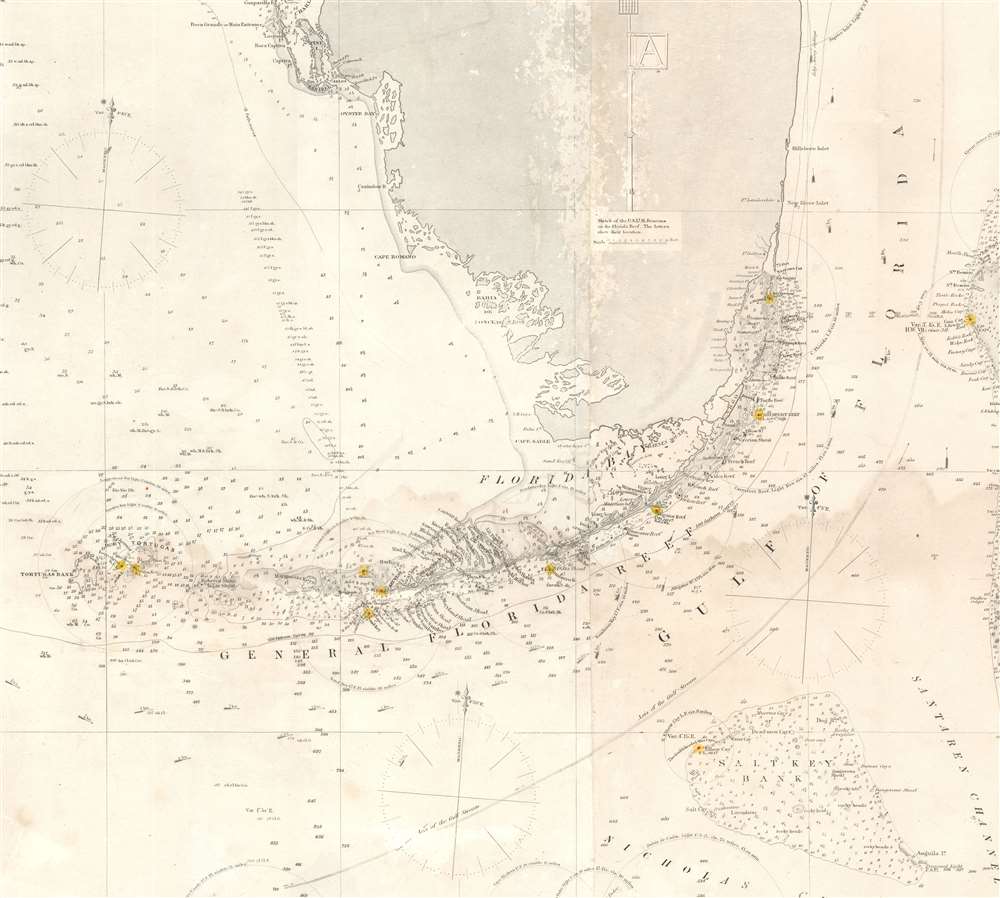 A most uncommon 1873 U.S. Navy Hydrographic Office nautical chart or maritime map of Florida and the Bahamas. Coverage embraces the lower two-thirds of peninsular Florida, the Florida Strait as far as Cuba, and the northern Bahamas. An inset in the lower left details Key West and it's vicinity from the 1851 U.S. Cost Survey of J. R. Rodgers. The Bahamas are superbly detailed with thousands of soundings - underscoring the danger of navigating these shallow waters. This chart follows in the lineage of Edmund March Blunt's great chart of 1844 - and is indicative of that commercial cartographer's long-standing influence on official naval chart making.

Where Miami now stands, on the mainland west of the Cape Florida Light, 'Elliots Beach' is labeled. Although no one knows for certain, it is believed that this was the camp used by surveyor Andrew Ellicott (1754 - 1820), a titanic figure in early American surveying who mapped the Florida coast around the turn of the 19th century. Elliot's Key, nearby, is also believed to be named after Ellicott - both sharing the same unfortunate error of the 'c' being omitted from the surveyor's name. Another theory suggests the name was an honorific to Gilbert Elliott, an English treasury official assigned by John Gerar William De Brahm (1711 -1799), who surveyed this coast in the 1760. We find this unlikely as we can find Elliott on none of De Brahm's maps while we can find a key in roughly the same location named after James Oswald, Elliott's chief rival in the royal court.

This chart was first published by the U.S. Navy Hydrographic Office in 1868. It was updated in 1872 and again, as here in 1873. Rare. We note no examples of this chart in the OCLC and know of none in private hands.

Good. Laid down on fresh linen. Some scuffing. Minor dampstaining.
Looking for a high-resolution scan of this?