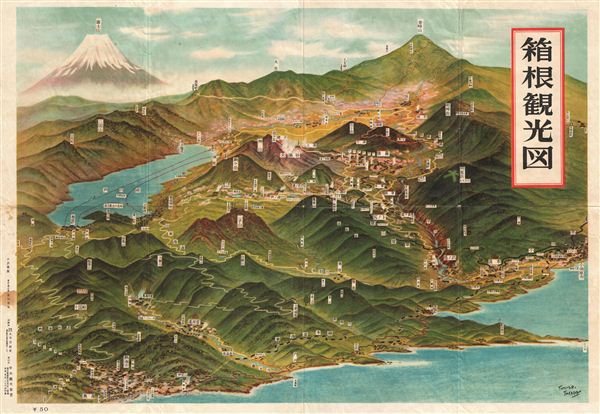 Shows Mt. Fuji in the distance.

A rare panoramic view of Hakone, Japan, dating to the 1950s. This map was drawn by Tomiteru Takaoa. Shows railways and roads well as topography. Mt. Fuji rises in the distance. This uncommon type of map evolved from the exposure of traditional Japanese view-style cartography to western technology. Views like this began to appear in Japan, Taiwan, and Korea in the early 20th century. Generally speaking such maps coincided with the development of railroad lines throughout the once vast Dai Nippon Teikoku or Japanese empire. It is a distinctive style full of artistic flourish that at the same time performs a practical function. This particular example is both relatively early and exceptionally beautiful. It was printed via a multi-color chromolithographic process with delicately shaded tones and an easily comprehensible intuitive design. essentially a transportation map, it shows the major and minor rail lines throughout Hakone.

Hakone (Hakone-machi) is a town in Ashigarashimo District in Kanagawa Prefecture, Japan. Hakone is located in the mountainous far west of the prefecture, on the eastern side of Hakone Pass. Most of the town is within the borders of the volcanically active Fuji-Hakone-Izu National Park, around Lake Ashi, shown here at top center. Hakone is the location of a noted Shinto shrine, the Hakone Gongen, which is mentioned in Heian period literature. During the Gempei War, Minamoto no Yoritomo prayed at this shrine for victory over his enemies. As with the rest of Sagami Province, the area came under the control of the late Ho-jo- clan of Odawara during the Sengoku period. After the start of the edo period, Hakone-juku was a post station on the To-kaido highway connecting edo with Kyoto. It was also the site of a major barrier and official checkpoint on the route known as the Hakone Checkpoint (Hakone sekisho), which formed the border of the Kanto- region. Under the Tokugawa Shogunate, all travelers entering and leaving edo along the To-kaido were stopped here by officials, where their travel permits and baggage were examined. After the start of the Meiji Restoration, Hakone became a part of the short-lived Ashigara Prefecture before becoming part of Ashigarashimo District in Kanagawa prefecture in August 1876. Hakone attained town status in 1889. After merger with five neighboring towns and villages in September 1956, it reached its present boundaries.