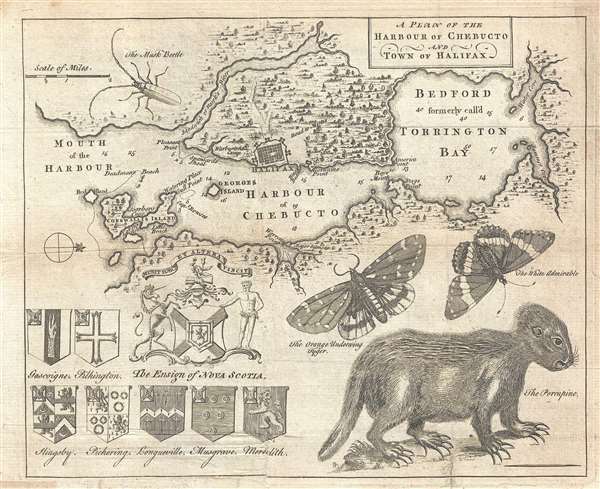 One of the more desirable maps to be issued for Gentleman's Magazine, this is a 1750 map of Halifax Harbor and vicinity, Nova Scotia, with naturalist elements. This map was issued 1 year after Halifax's founding in 1749. Oriented to the west and centered on the Harbor of Chebucto (Halifax Harbor), the map covers from the mouth of the harbor and Cornwallis Island and Bedford Bay (Torrington Bay). The lower quadrants of the map bear various armorial crests associated with Nova Scotia and zoological diagrams.

The map is most noteworthy for its includes of zoological elements including three insets and a very stylized porcupine. The porcupine is indigenous to the region, but the entomological elements are all native to Europe and including a White Admiral, (Limenitis Camilla), an Orange Underwing moth (Archiearis parthenias, and a musk beetle, (Aromia moschata).

There is some debate related to who engraved this map relating to its marked similarity to To the Right Honble. the Lords Commissionrs. for Trade and Plantations , engraved in 1750 by Thomas Jefferys. The similarity of the two plans led Jolly to attribute the map to Jefferys. Others have noted the initial 'MH' hidden in the vegetation to the left of Torrington Bay. This doubtless refers to the Moses Harris, who is credited with surveying the region on the Jefferys map. Moreover, the presence of entomological elements also points to Harris, who was also an entomologist and is recorded in Halifax around the time this map was engraved. It is clear that while both maps offer related cartography, they are from completely separate plates, leading us to believe that the present map is the work of Harris and probably predates the Jefferys plan.

This map was issued in the July 1750 issue of Gentleman's Magazine.

Moses Harris (April 15, 1730 - c. 1788) was an English entomologist, surveyor, and engraver. Harris was encouraged to study entomology by his uncle, a member of the Society of the Aurelians. He joined the society himself and in 1762 became a secretary in that organization. Harris and his wife moved to Halifax, Nova Scotia, around 1749, arriving on board the Winchelsea. While there he surveyed Halifax Harbor and prepared a view of the city that was advertised in Gentleman's Magazine in December of 1749. Harris published several important works on insects, including notable butterfly engravings, as well as a treatise on color. His cartographic corpus is limited, but he is known to have been in Halifax c. 1750 and to have worked on a survey of that region. Learn More...