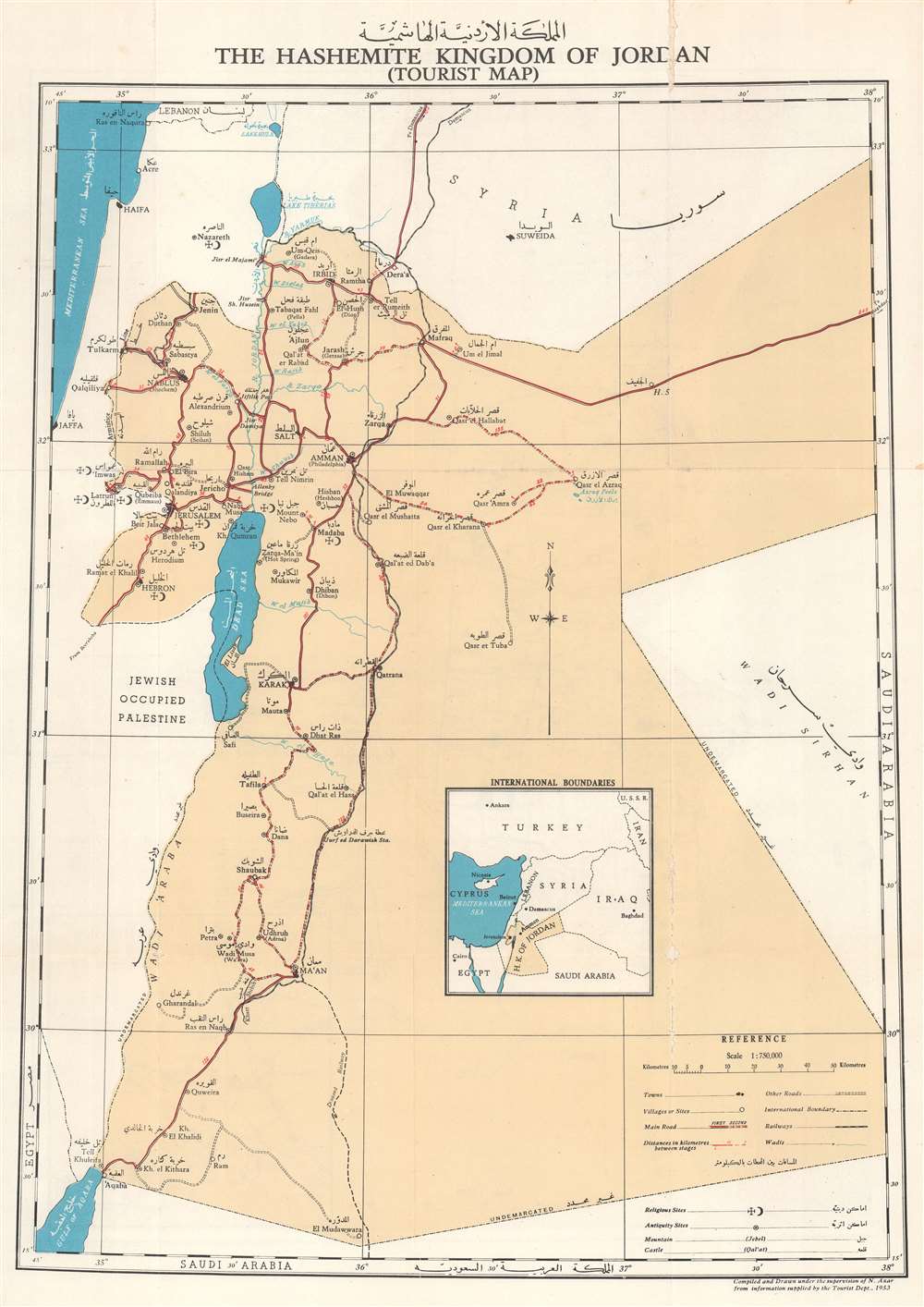 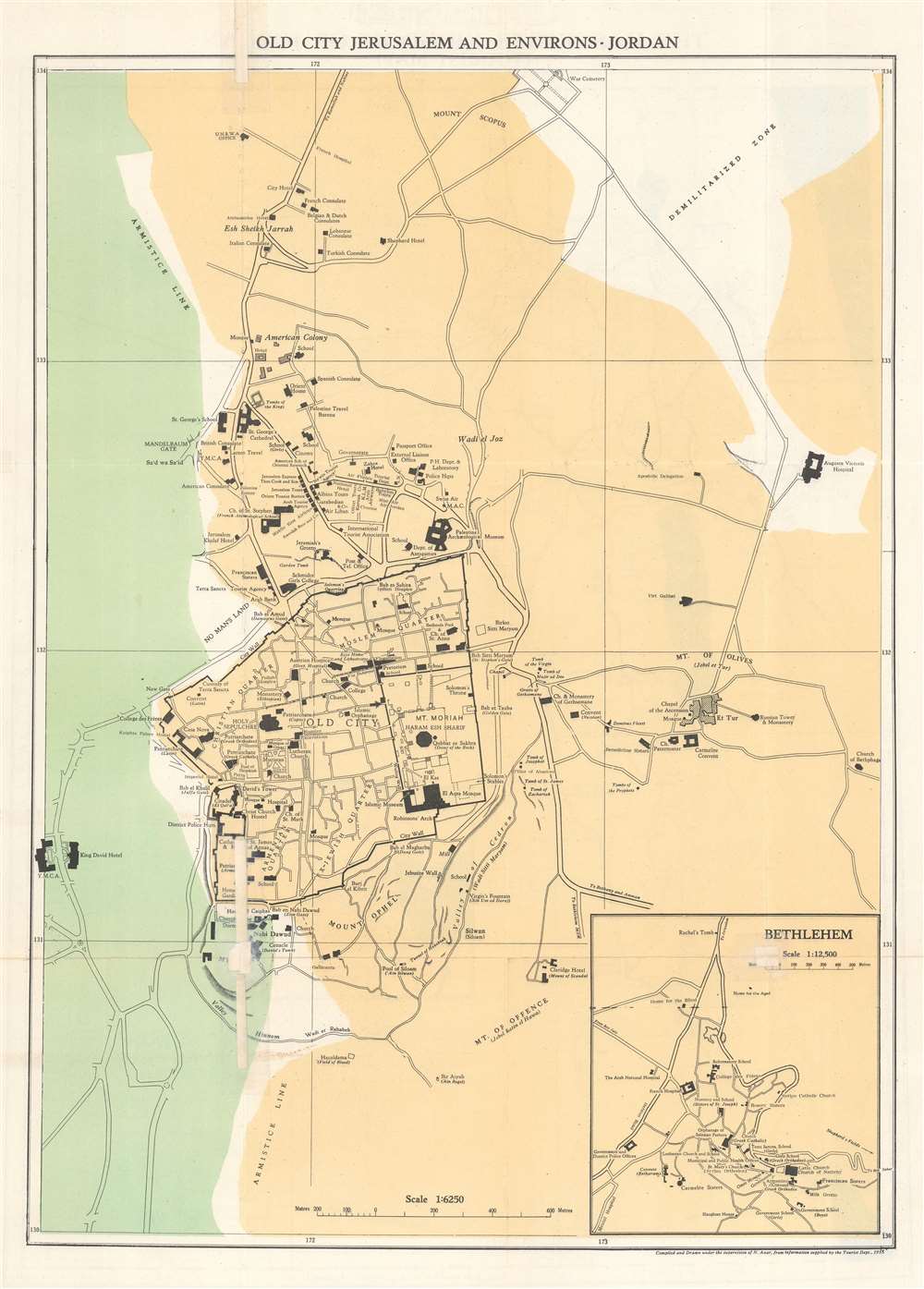 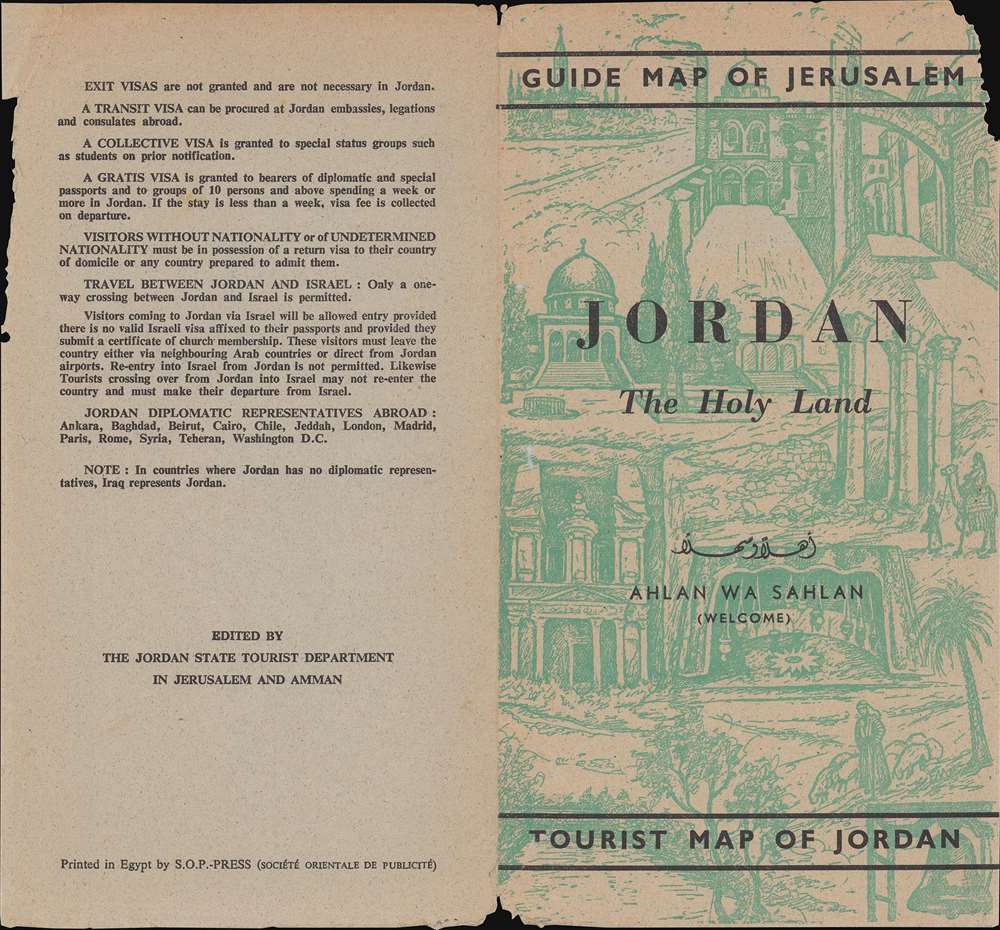 This is a 1955 N. Azar bilingual English and Arabic tourist map of Jordan, officially known as the Hasemite Kingdom of Jordan.

Cities and towns throughout the West Bank, including Jerusalem, Bethlehem, Hebron, and Jericho are labeled. Jerusalem, Bethlehem, and Hebron each bear symbols marking them as religious and antiquity sites. The Armistice Line agreed to after the 1948 Arab-Israeli War appears as a dashed line around the West Bank and is labeled as Armistice Line. Israel / Palestine is labeled on the map as 'Jewish Occupied Palestine' to the west of the Dead Sea. Intriguingly, this is some of the only text that does not appear in both languages.

As stated above, cities and towns are marked and labeled in both English and Arabic. Amman, Aqaba, and Petra (the historical site) are among the labeled locations within Jordan. Outside Jordan, Jaffa, Haifa, and Acre are identified. Jordan's road network appears with notations used to define road grades. Railways are traced by black and white dashed lines. An inset in the lower half of the sheet situates Jordan within the greater region.

The Hashemite Kingdom of Jordan

The royal family of Jordan, known as the Hashemites or the House of Hashim, have ruled Jordan since 1921. Before becoming the rulers of Jordan, the family reigned over the holy city of Mecca continuously since the 10th century, usually as vassals to another power. The Hashemites sided with the British during World War I. After the fall of the Ottoman Empire at the end of that war, the British devised a plan to put four of Sharif Hussein's sons on the thrones of four newly created countries in the Middle East: Hejaz, Jordan, Syria, and Iraq. While the plan was not executed exactly, the family ruled Hejaz from 1916 until 1925, Syria for a short time in 1920, Iraq from 1921 until 1958, and remain in Jordan. Jordan gained its independence from Britain on May 25, 1946 and was declared the Hashemite Kingdom of Transjordan. Three years later, on April 26, 1949, the country's name was shortened to the Hashemite Kingdom of Jordan.

A map of Jerusalem is printed on the verso. The Armistice Line appears in white and runs vertically through the left quarter of the sheet. Jordanian territory is shaded a light brown, while Israeli territory is shaded green (which makes some sense, because the Armistice Line was informally known as The Green Line). Buildings are labeled throughout Jerusalem, including the Al Aqsa Mosque, the Dome of the Rock, the Holy Sepulcher, and the Wailing Wall. The Old City is divided into the Christian Quarter, Armenian Quarter, Ex-Jewish Quarter, and Muslim (Moslem) Quarter. Mosques, consulates, government ministries, hotels, and tourism offices are all labeled outside the Old City. An inset in the lower right corner details Bethlehem.

This map was compiled by N. Azar from information supplied by the Tourism Department in 1955. We note six separate OCLC references for this map with nineteen institutions appearing in the references, including Princeton University, the National Library of Israel, the University of Illinois at Urbana Champaign, the Bibliothèque nationale de France, the National Library of Poland, and the University of Michigan. It is scarce on the private market.