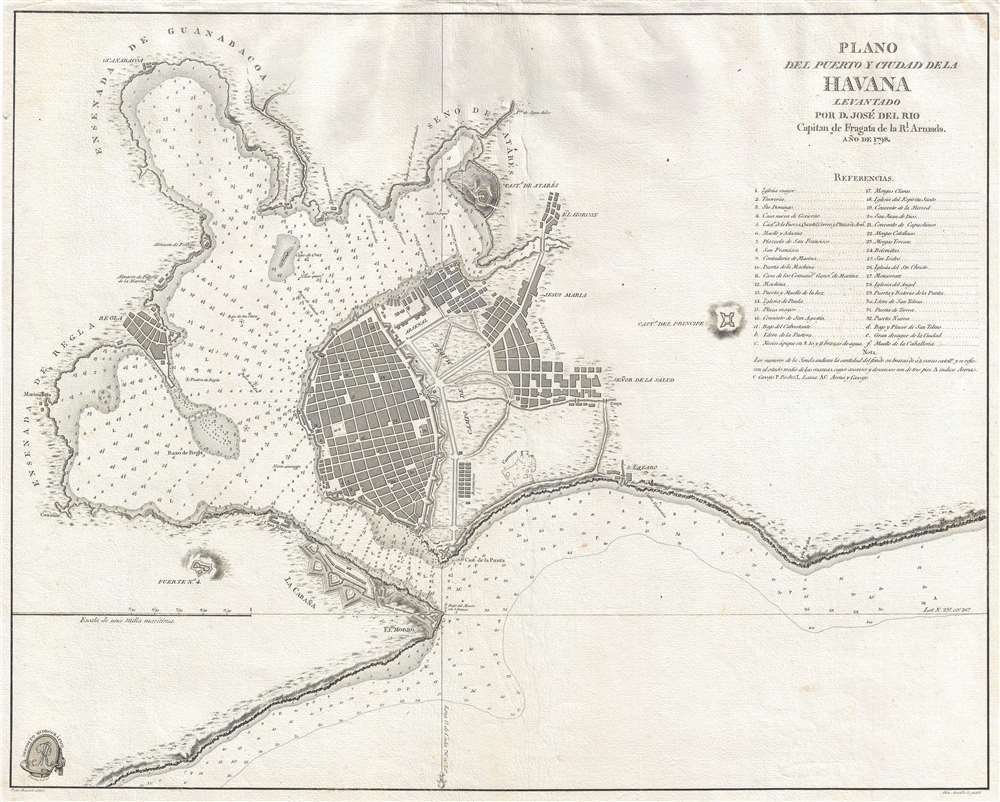 This rare 1798 Spanish nautical chart and city map of Havana and its harbor was produced from surveys undertaken by José Del Rio, who was a captain in the Spanish Royal Navy. The chart covers the city of Havana as well as the harbor. The depiction of the harbor and the coastline is very detailed, showing numerous depth soundings and the small variations in the coast. On the upper-right side of the map, a list of 37 locations identified on the map in the city and harbor has been included, along with a note explaining that the numbers in the harbor are depth soundings. This map was engraved by Felipe Bauza (1764-1834), one of Spain's most important chart and map makers. This chart and city map was a separate issue, making it quite rare. We have identified a few examples in institutional collections and no other examples currently on the market.

Dirección Hidrografica (1787 - 1927) was the Spanish equivalent of the British Admiralty or the U.S. Coast Survey. This organization, founded in 1787, was commissioned to produce accurate nautical charts of all waters frequented by Spanish vessels. In essence, it replaced the Casa de Contratción, which closed its doors in 1790. Like most such organizations, the Dirección Hidrografica or Depósito Hidrográfico marked a new age in Spanish maritime cartography. Rather than compile charts created by navigators, explorers, and merchants, the Direccion Hidrografica worked closely with naval and military personnel to actually visit the sites directly in pursuit of the most accurate hydrographical, astronomical, and geodetic measurements. The Direccion Hidrografica created a massive library of nautical charts that, though not nearly as common as similar nautical charts by the U.S. Coast Survey and British Admiralty, are highly desirable for the beauty of their manufacture as well as their accuracy and detail. The office was originally located on Calle Ballesta, but relocated to 36 Alcala, both in Madrid. After 1908 the Dirección was subsumed into other governmental agencies. In 1927 the Direccion was absorbed into the Institute and Observatory of San Fernando, located in Cadiz. The library of original maps, charts, and journals was transferred to the Naval Museum of Madrid - where it resides to this day. Learn More...