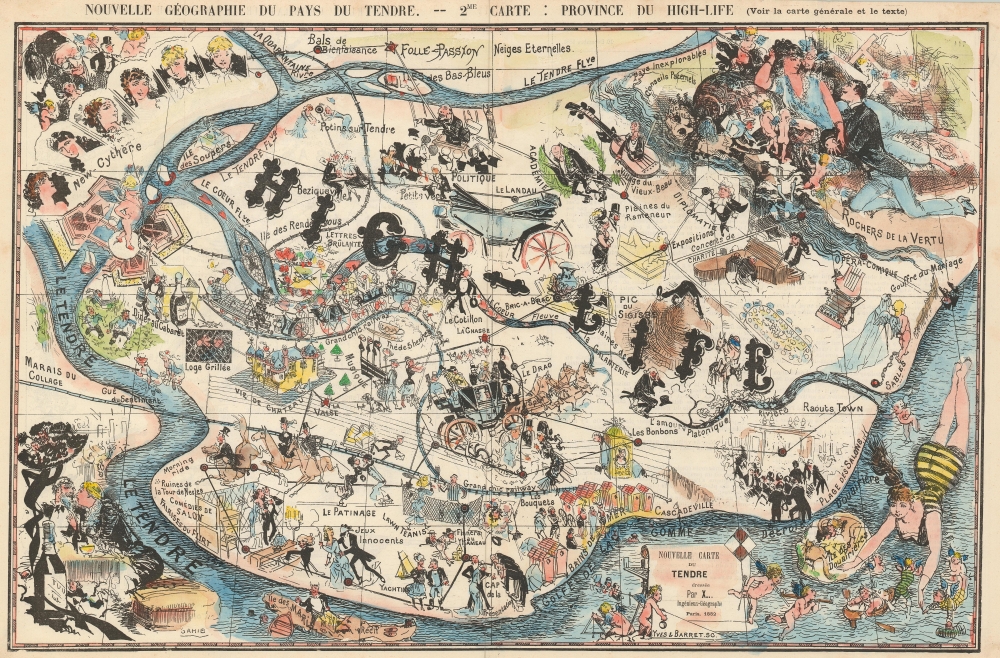 Highlights the romantic activities of high society individuals in an imaginary France known as the Country of Love.
$1,200.00

This is an 1881 Sahib pictorial map of the province of High Society or High-Life in the Country of Love or Pays du Tendre. Illustrating possible activities in the love lives of high-class individuals, and high society in general. New-Cythère, the capital of the Pays du Tendre, is situated in the upper left corner and is occupied by no less than six 'Venuses', which references the fact that Cythère, in mythology, is the island where Aphrodite appears after she is born from the sea. The River of Love (Le Tendre Fleuve practically encircles or High-Life which contains numerous different sites. Leisure activities of the upper crust, such as ice skating, lawn tennis, and yachting, are referenced, as are staples of romance in high society, including bouquets of flowers and candy (les bonbons). Music, dancing, 'castle life' (vie de chateau), and dinner at a cabaret are other highlights of life here. The Heart River (Le Coeur Fleuve) nearly cuts the province in two, with a different genre of activities illustrated above the river than below. Above the river, politics, academia, diplomacy, art exhibitions, charity concerts, and the opéra-comique. Other sites throughout the map include the 'Rocks of Virtue' (Rochers de la Vertu), the 'River of Platonic Love' (L'amour Platonique Riviere), the Chasm of Marriage (Gouffre du Mariage), and the 'Swamp of Collage (Marais du Collage). Collage is a French slang term which is defined as 'living as husband and wife in an unmarried state'. The whole provides an intriguing commentary on romance in high society.

This map was created by an artist known as Sahib and engraved by Yves and Barret for La Vie Parisienne and published in the December 24, 1881 issue. We have been unable to locate any other known examples.

Sahib, 'Nouvelle Géographie du Pays du Tendre. -- 2me Carte: Province du High-Life.', La Vie parisienne. December 10, 1881.     La Vie Parisienne (1863 – 1970) was an illustrated French culture magazine that also supplied the name for the celebrated Jacques Offenbach opera La Vie parisienne. The expression vie parisienne began being used during the Bourbon restoration, but gained popular use following the publication of Honore de Balzac’s novel titled Scenes de la vie p-parisienne in 1834. The magazine’s founder, Marcelin, wanted to take advantage of the popularity of the phrase when he decided to found a magazine. The subtitle for La Vie parisienne was: 'Moeurs elegantes, Choses du jour, Fantaisies, Voyages, Theatres, Musique, Modes' (Elegant traditions, Things of the day, Fantasies, Travels, Theatre, Music, Fashion). A weekly magazine, La Vie parisienne helped to liberalize and diversify the press. By 1905, due to a lessening in censorship, La Vie parisienne began to publish more and more erotic imagery. This publication was very popular among the soldiers in the trenches during World War I, even publishing requests for ‘wartime godmothers’, which also translates as pen pals. By the 1930s, cinema had become a major part of the publication, and by the 1940s, pin-ups began making regular appearances.

Very good. Even overall toning. Light wear along original centerfold. Text on verso.
Looking for a high-resolution scan of this?