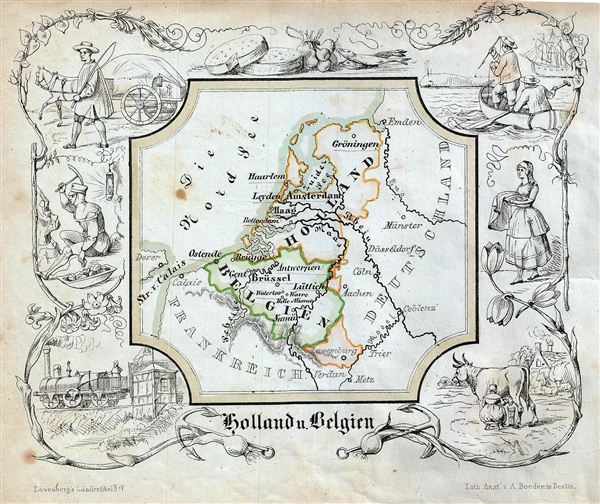 A delightfully whimsical 1846 map of Holland and Belgium, from a German kinderatlas or children's atlas. The map details the countries of Holland and Belgium with the two countries divided with color coding. The whole is surrounded by a wide border featuring charming vignettes meant to illustrate the peoples and cultures of the region. These include fisherman hunting a whale, a man next to a horse carriage, a woman milking a cow, a woman with a tray in hand, a steam engine etc. The map is accompanied by its adjacent page, which includes a poetic history of the Kingdoms of Holland and Belgium in gothic type. The wonderful and rare map was drawn by Anst. V A. Boeden of Berlin for inclusion as plate no. V in the 1846 issue of Julius Loewenberg's Geographische Landerfibel.

Very good. Even overall toning. Blank on verso. Minor stain over the North Sea.
Looking for a high-resolution scan of this?