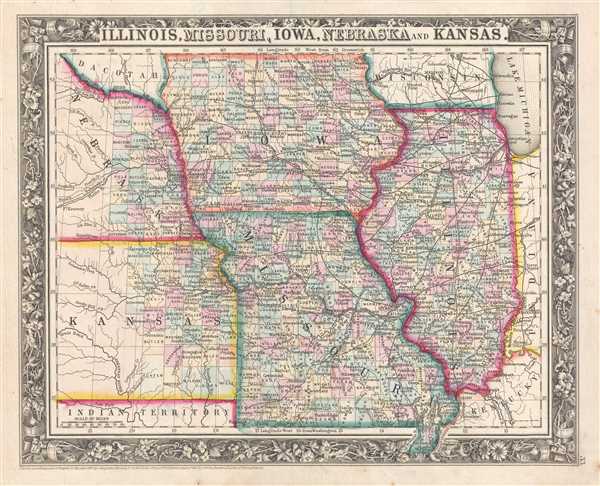 Creates a visual comparison of the industrial strength of the North versus the weakness of the South in relation to the number of constructed and proposed railroad lines.
$200.00

This is an 1861 Samuel Augustus Mitchell, Jr. map of Illinois, Missouri, Iowa, Nebraska, and Kansas. The map depicts the region from Nebraska and Kansas to Indiana and Kentucky and from Dacotah, Iowa, and Wisconsin to the Indian Territory, Missouri, and Kentucky. No map better encapsulates the industrial capacity of the northern United States at the outbreak of the Civil War. The rail network that was in place in Illinois and Iowa, along with those that were projected to be built, far the status of built lines and planned lines in Missouri, a slave state. It is interesting to note that all railroad construction, in both Iowa and Missouri, stops at the Missouri River, with no planned lines illustrated in either Nebraska or Kansas. One of the major factors that gave the Union an advantage was its industrial capacity. The exigencies of war also caused the North to exploit this potential with incredible speed. For example, by the war's end, over 15,000 miles of telegraph cable had been laid. The increase in the speed of communication and transportation allowed for the American Civil War to change the reality of warfare forever.

Individual counties are illustrated, labeled, and shaded different colors to allow for easy differentiation in both all five states, although counties are only illustrated in the eastern portion of Kansas and Nebraska. Cities, Chicago, Springfield, Des Moines, St. Louis, Kansas City, St. Joseph, Madison, and Omaha are labeled, along with myriad other towns and villages. Rivers, creeks, and lakes are illustrated as well, though not all are labeled.