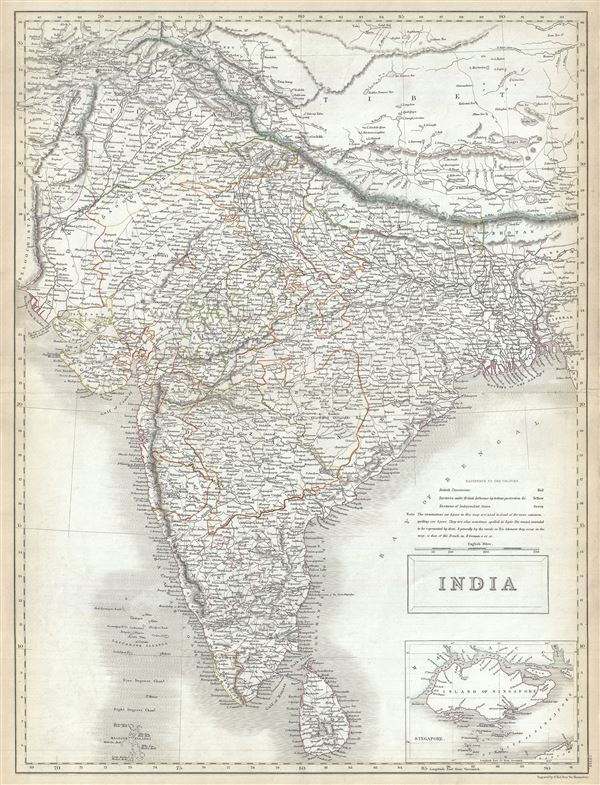 This is a fine example of the Adam and Charles Black's 1844 map of India. It covers the Indian subcontinent from the Indian Caucasus Mountains to the Indian Ocean and includes Ceylon or Sri Lanka and part of Kabul in Afghanistan. The map is coded with outline color according to territories under British Possession, territories under British influence by tribute protection and independent states. Various towns, cities, rivers, mountains, islands and several other topographical details are noted with relief shown by hachure.

This map's large inset of Singapore Island, in the lower right quadrant, is of particular interest. Like India, Singapore was administered by the British East India Company and, largely due to the opening of the Chinese market, was rapidly rising to dominate regional shipping. The map identifies the city of Singapore, the hospital, the European settlement, mercantile yards, the powder magazine, battery, and the sultan's mosque. This is one of the earliest maps to offer a specific detail of Singapore Island that we have encountered.

Most of India had, at this juncture, fallen under the control of the British East India Company. India, long an exporter of manufactured goods, instead became a supply house for raw materials to the British Empire. The Empire by this time had also started initiating the non-economic programs for education, culture, and social reform throughout the Subcontinent. Most historians consider this to be the true beginning of India's colonial period.  The East India Company ruled India until 1858, after which it was governed by the British Raj until it finally gained independence in 1947. This map was engraved by Sidney Hall and issued as plate no. XXXIX in the 1844 edition of Black's General Atlas.