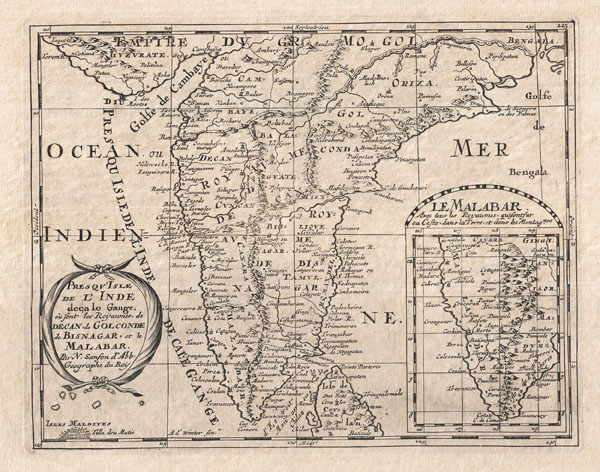 A small but attractive 1652 map of India by the French cartographer Nicholas Sanson. Covers the subcontinent From the Bay of Bengal and the Gulf of Cambay to Ceylon (Sri Lanka). Offers impressive detail given that the interior of India was largely unknown to the west until the British survey's of the late 18th century. The vast Mogul Empire sprawls across the northern part of the map. Further south the kingdoms of Deccan, Malabar, Bisnagar, and Golconda, among others, are noted. As an indicator of how just out of date European knowledge of this region was, most of these kingdoms had fallen to ruin over 100 years prior to the publication of this map. The Portuguese enclave of Goa on India's west coast is noted. In the lower right quadrant there is an inset of the Malabar Coast. The lower left hand quadrant features a curious and speculative depiction of the Maldives.

Rajendra, The Art of Map-Making and Some Rare Maps of South Asia and Sindh 140 AD to 1808 AD, no. 16.
Looking for a high-resolution scan of this?