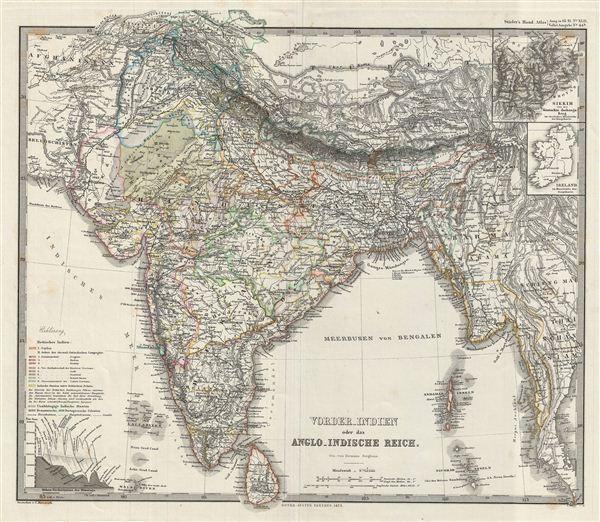 This is a beautiful example of Stieler's 1873 map of the Indian Subcontinent. It covers the entire subcontinent from the Himalayas south as far as Ceylon (Sri Lanka) and from Sindh as far east as Burma. The modern day nations of India, Pakistan, Nepal, Bhutan, Bangladesh, Sri Lanka, Burma and parts of Thailand, Tibet and Afghanistan are included. The Andaman and Nicobar and the Lakshadweep Islands are also identified. Two insets in the top right quadrant feature Sikkim and, curiously, Ireland (possibly to offer a sense of scale?). Map is highly detailed with both political and physical data with the Himalayas beautifully depicted. The lower left quadrant features the elevation of the Himalayas.

The map depicts most of what is today modern India and what was, when this map was made, British India. In 1857, following the Sepoy Mevolt, the east India Company was dissolved and governance of India was administered directly by the British Crown. The British Raj ruled India until its independence in 1947.

Various cities, mountains, roads, rivers and an assortment of additional topographical details are noted. Printed to a high production standard, as was typical of German and especially Perthes/Stieler maps of this period. Published by the Justus Perthes firm for issue in the 1873 edition of Stieler's Hand-Atlas.