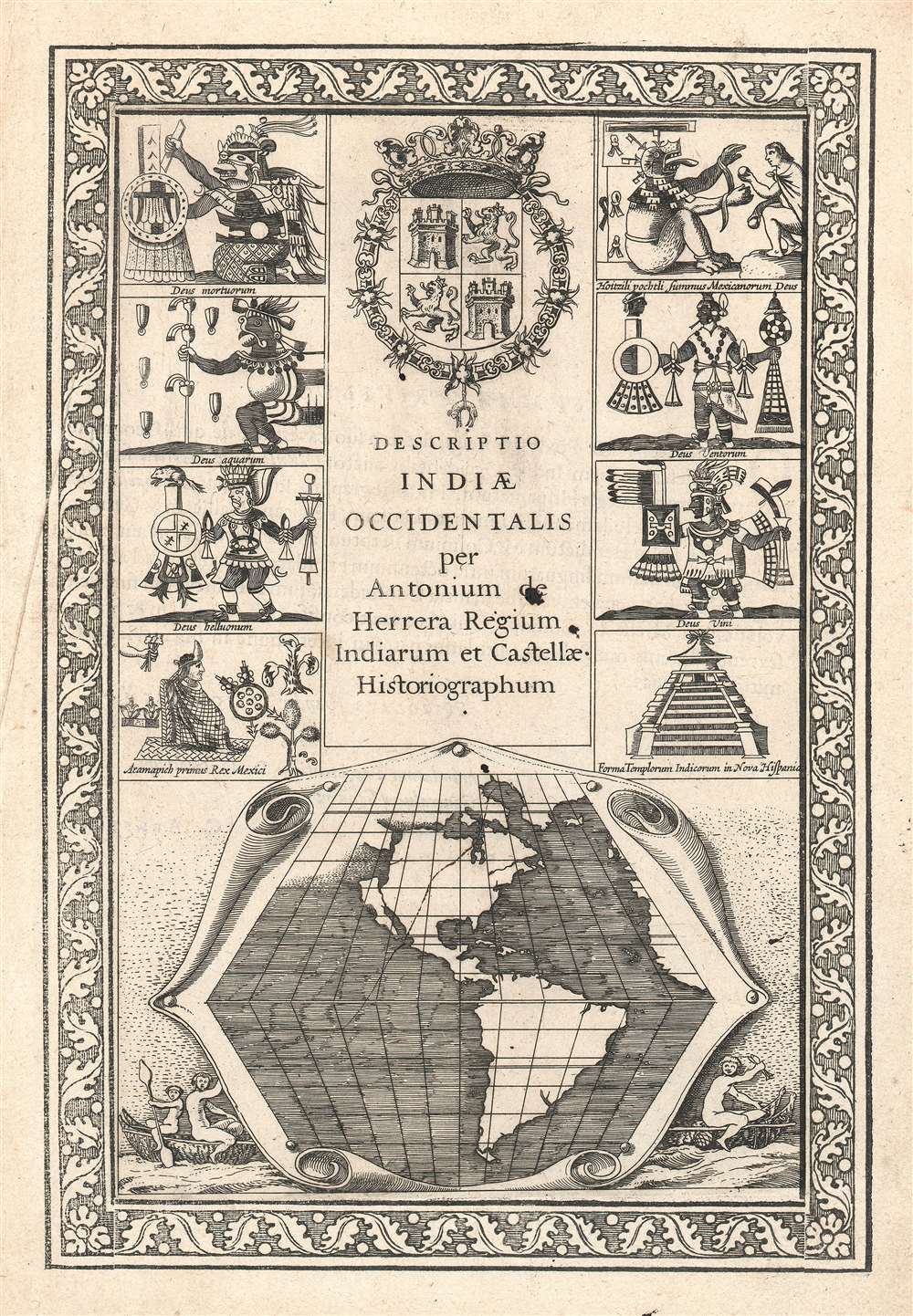 The first map to show California as an Island!

This seminally important 1622 map is considered the first to illustrate California as an Island. This map is actually part of the title page of the Michiel Colijn expanded edition of Antonio de Herrera y Tordesillas's Descriptio Indiae Occidentalis. The map, appearing at bottom center, is simple but masterfully engraved. It argues for three important and revolutionary ideas:

For a breakdown on why this is significant, please see our explication below. In addition to the map, the title page bears eight illustrations of Aztec peoples, gods, and architecture. At center, there is a finely engraved Castilian armorial crest. To the left and right of the map itself, indigenous peoples ply the seas in small canoes.

Baja California was subsequently discovered in 1533 by Fortun Ximenez, who had been sent to the area by Hernan Cortez. When Cortez himself traveled to Baja, he must have had Montalvo's novel in mind, for he immediately claimed the 'Island of California' for the Spanish King. By the late 16th and early 17th centuries, ample evidence had been amassed, through explorations of Francisco de Ulloa, Hernando de Alarcon, and others, that California was a peninsula. Nonetheless, by this time other factors were in play. Francis Drake had sailed north and claimed Nova Albion, modern day Washington or Vancouver, for England. The Spanish, fearing that the English had discovered the Northwest Passage and the Strait of Anian, thus needed to promote Cortez's claim on the 'Island of California' to preempt English claims on the western coast of North America. The significant influence of the Spanish crown on European cartographers spurred the popularity of the Insular California theory.

The earliest surviving map to illustrate California as an island is considered to be the 1622 title page to the Michiel Colijn edition of Antonio Herrera y Tordesillas's Descriptio Indiae Occidentalis. Even so, the insular California convention formally dates to 1620, when the Dutch seized a Spanish ship transporting the account of Friar Antonio de la Ascension, which was intended for the Council of the Indies. In that work, the good Friar apparently asserted his strong belief, based upon reports obtained from 'navigators' that California is insular. While the map accompanying Friar Ascension's map is now lost, a legend on the Henry Briggs map of 1625 conveys this information and that Briggs saw such a map in 1622. Colijn may have seen the same map when preparing this Herrera y Tordesillas title page.

The Speculation of Samuel Bawlf

The researcher, sailor, and historian, Samuel Bwalf, presents another fascinating possibly in the postscript of his book, The Secret Voyage of Sir Francis Drake. Therein he describes how Friar Ascension accompanied Juan Sebastian Vizcaino on a 1602 voyage in search of the Strait of Anian, which the Spanish believed Sir Francis Drake to have discovered - and which was a possible threat to Spanish Pacific hegemony. The Ascension account describes how Drake collected a foreign pilot, possibly a Basque, named 'Morera,' during his raid on Huatulco, Mexico. Morera accompanied Drake north.

Believing he had discovered the Strait of Anian, the supposed western entrance to the Northwest Passage, Drake sent part of his fleet, including Morera, 'home' through the passage on a captured Spanish barque. The crew of the barque had instructions to return to Nova Albian (possibly Whale Cove), if they failed to navigate the Northwest Passage. What happened next is unclear, Drake certainly never returned to Whale Cove. The crew of the Spanish barque would likely have navigated as far north as Skagway, Alaska, before realizing that they could go no further and thus turned back to Whale Cove.

There, they waited for some time, possibly several years, before sending Morera, the only Spanish speaker present, south to seek rescue from the Spanish in Mexico. Morera appears to have made it, but at this point he would have been roughly interrogated by the Spanish, who greatly feared Drake's discoveries and potential English incursion into the Pacific. Bwalf speculates that Morera, perhaps in genuine confusion, or perhaps, recognizing that no rescue would come from the Spanish, concocted the insular California legend to mis-direct the Spanish. Morera himself, too knowledgeable to let free, was probably executed by the Spanish in Mexico. The results of his interrogation, including a map he drew, were copied by Friar Ascension, and sent back to Spain.

Bawlf's Reading of this Map

Based upon his research into Drake's voyage, Bawlf interprets this map thus,

From the top of the Gulf of California, Ascension's map shows a long narrow sea passage reaching northward and emerging into a broader opening behind a great square headland clearly resembling the Olympic Peninsula, except that it is placed a little below its true latitude. Undoubtedly this was the arm of sea described by Morera, and also the origin of Spanish fears that the English had found a way into the Gulf of California from the north; hence Vizcaino's first expedition of 1594, on which de Fuca appears to have served as pilot.

At 49 degrees Morera evidently drew a river - obviously the Fraser - although either he or Ascension omitted the island of Nova Albion and the Queen Charlotte Islands. At 55 degrees, however, Morera evidently drew a long, southward-pointing headland that would be Prince of Wales Island, and there running northward from the headland to a juncture with the northwest passage is Drake's Strait of Anian, albeit somewhat simplified. Clearly Morera had been with Drake when he discovered the strait, and the Spanish had heard about the voyage, or at least what Morera had been persuaded to tell them, sometime around 1584. (Bawlf, S., The Secret Voyage of Sir Francis Drake, 1577 - 1580, [New York: Walker and Co] page 331.)

Bwalf goes on to speculate that Morera's report was copied by both Ascension and the Greek pilot who worked with the Spanish, Juan de Fuca (Apostolos Valerianos). At least one copy of Morera's account and map, the Ascension copy, made it to Spain. Another Ascension copy was seized by a Dutch ship, where the concept of insular California was introduced to Dutch cartographers. Another report was apparently recorded by De Fuca, who returned to Greece, but attempted to convince the British crown to sponsor an expedition under his command to complete Drake's Northwest Passage discovery. Political changes temporarily ended British interest in the Pacific Northwest and Drake's discoveries. By the time the British were again interested in the region, De Fuca had long since passed.

Herrera y Tordesillas first published Descriptio Indiae Occidentalis in 1601. That edition did not contain this important title page. The title page with the insular California map first appeared in the 1622 Michiel Colijn edition - as here. The title page, which was engraved and printed in Latin, accompanied 1622 editions of Herrera in both French and Dutch.

Michiel Colijn (October 29, 1584 - September 23, 1637) was a Dutch printer and publisher active in Amsterdam during the late 16th through the early 17th centuries. Most of his work was issued between 1608 and 1635. Colijn was a student and employee of the printer, publisher, and bookseller, Cornelius Claesz (1560-1609). After Claesz died in 1609, his printing plates and other professional affects were sold at auction in 1610. Most of these were acquired by Colijn, who used them as the basis of his own publishing house.

Burden, P., The Mapping of North America, 195.
Looking for a high-resolution scan of this?