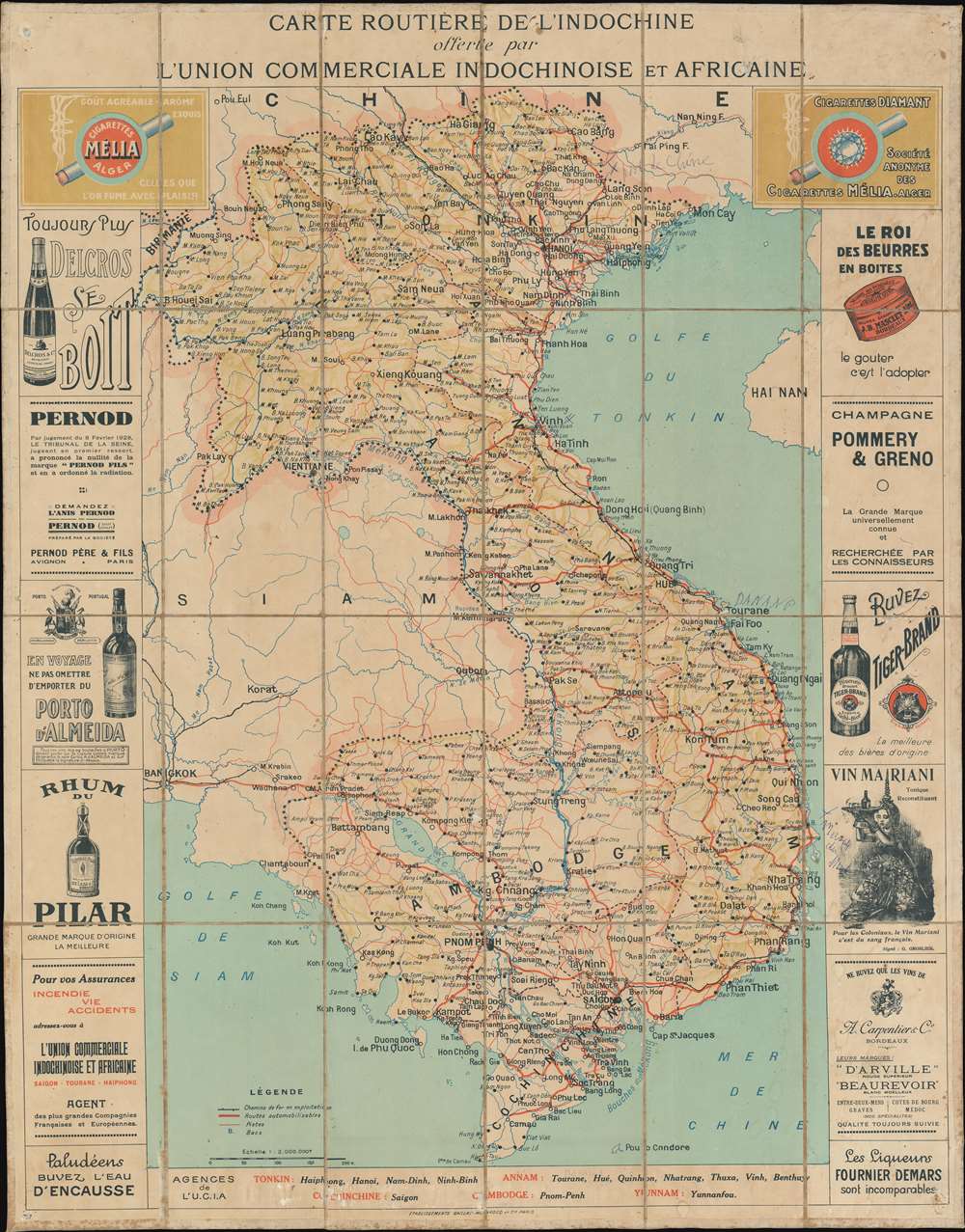 A visually striking c. 1928 large-scale folding chromolithograph map of Vietnam, then French Indochina, issued by L'U.C.I.A., Union Commerciale Indochinoise et Africaine. The map covers all of modern-day Vietnam, Cambodia, and Laos, as well as parts of adjacent Thailand (Siam). The focus of the map is on road networks within Indochina, but its most striking feature is the interesting advertising surrounding the map proper.

The advertisements surrounding the map focus on luxury products, particularly tobacco, wine, and spirits, including Rum, Vermouth, Porto d'Almedia, Tiger Beer, Delcros Champaign, Pernod Pastis, and more. The cigarette brands Melia and Diamant and particularly prominent. It is through the advertisements that we are able to date the amp, as the Pernod copy notes a then recent 1928 court ruling over trademark infringement.

Indochina in the late 1920s

This map presents French Indochina against a backdrop of social unrest and major political and economic change. The French Indochine government was at the time in tense negotiations with the Kingdom of Siam (Thailand) over broad swathes of Cambodia and Laos over which the Siamese had a traditional territorial claim - so the inclusion of the overland route to Bangkok on this map becomes more significant. Moreover, it was also a period of increased Vietnamese nationalist sentiment and the call for independence. Two years after this map was issued the 1930 Yên Bái Muntiny, instigated by the Vietnamese Nationalist Party, inspired a general uprising against French authority. This ultimately led to independence in 1954.

This map was issued in c. 1928 by the Union Commerciale Indochinoise et Africaine. It was printed in chromolithograph color. Exceedingly rare. No records in the OCLC or of previous sale.

Union Commerciale Indochinoise et Africaine (1918 - 1954) was a French colonial trade organization formed in 1818, when the l'Union commerciale indochinoise merged with the Société d' Études et de Commerce au Maroc. The organization had branches in Hanoi, Saigon, Hué, Pnom-Penh, and Yunnanfou, among others. It printed promotional material, ran stores, and consolidated trade throughout French colonies in Indochina and Africa. It shut down permanently in 1954, when the French left Indochina and Vietnam gained its independence. Learn More...

Good. Some surface damage, soiling, and abrasion. Dissected and laid down on linen. Original linen intact and stable. Some manuscript annotation.
Looking for a high-resolution scan of this?