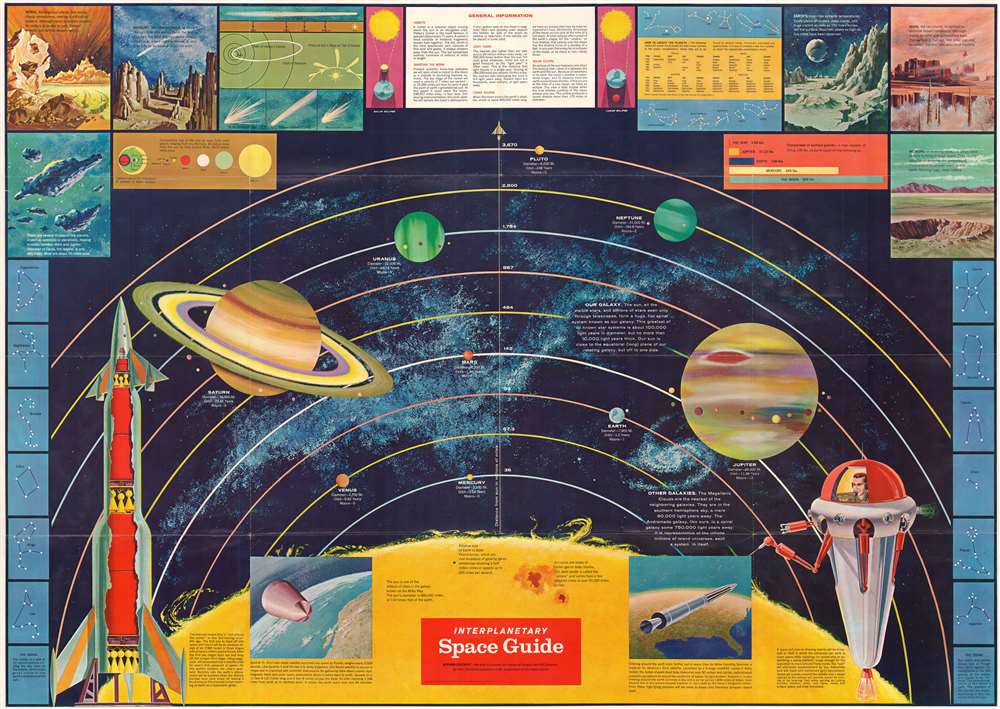 This is a 1958 Western Printing and Lithographing map of the Solar System. With the Sun at the bottom of the sheet in the 'foreground', the nine planets are illustrated in orbital order from Mercury through Pluto. Each planet is labeled and each one's diameter, orbit around the Sun (given in Earth years), and number of moons (as of 1959) are provided. Artistic renderings of the surface of Venus, Mercury, the Moon, and Mars line the top of the sheet. Illustrations explaining solar and lunar eclipses as well as some general information about the universe appear along the top border as well. Sketches of the twelve zodiac constellations occupy the lower left and right sides. Illustrations of two real satellites, Explorer III and Sputnik III are situated along the bottom superimposed over the illustration of the Sun. These are flanked by illustrations of a rocket and a capsule-like 'space suit', both of which feel as if they have been lifted directly from the pages of a Arthur C. Clarke novel.

This map was created and published by the Western Printing and Lithographing Company in 1958. We see no examples in institutional catalogs.

The Western Printing and Lithographing Company (1907 - 1996), also known as Western Publishing, is best remembered for publishing the Little Golden Books. In 1907, Edward Henry Wadewitz purchased the West Side Printing Company in Racine (where he worked) after his employer was unable to pay his wages. After the purchase, Wadewitz hired a printer since he knew he needed staff more familiar with the business than he. The business changed its name to the Western Printing and Lithographing Company after acquiring its first lithographic press in 1910. Sales and revenue continued to grow, which in turn fueled the growth of the company. In 1923, Western introduced jigsaw puzzles and boxed games. Western began publishing Little Golden Books geginning in in the 1940s beginning with a group of twelve titles.In the 1970s, Western was the main manufacturer and distributor of Trivial Pursuit and other board games. After Mattel Inc. purchased Western in 1979, it ceased to be an independent company. Mattel sold Western to a New York real estate investor in December 1983. Under his direction the company prospered throughout the rest of the 1980s, but sales and profits began to decline in the 1990s. Western began losing money and by 1996 was renamed Golden Books Family Entertainment. Unfortunately the company continued to flounder throughout the rest of the 1990s and into the 2000s and fell into bankruptcy serveral times. The catalog has since been bounced around between many companies, including Random House. Learn More...

Good. Exhibits wear along original fold lines. Closed twelve and one-quarter inch tear (12.25) mostly along a fold line professionally repaired on verso.
Looking for a high-resolution scan of this?