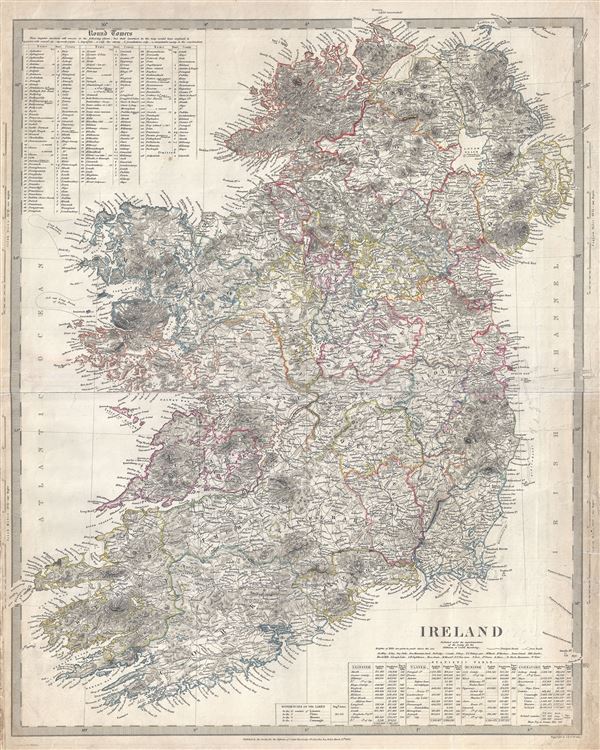 This is an appealing 1838 Map of Ireland issued by the Society for the Diffusion of Useful Knowledge, or S.D.U.K. It depicts the entire Emerald divided into 32 counties. It covers from Donegal in the north to Cork in the south. Towns, rivers, mountains, railroads, roads and various other important topographical details are noted. Elevation throughout is rendered by hachure and political and territorial boundaries are outlined in color. It also names the four ancient provinces of Leister, Ulster, Munster, and Connaught. A statistic table for the four provinces is included in the lower right quadrant of the map, while the upper left quadrant features a list of the 'round towers.' Tuscar Rock near the southeast coast of Ireland, known to have destroyed more ships than any other Irish coastal feature, is identified.

After the Norman Invasion the old provincial structure was supplemented with modern system of counties - even so the old provinces are still referenced today. In 1801, the island of Ireland became part of the United Kingdom of Great Britain and Ireland. Though Britain flourished during the 19th century, Ireland suffered a series of famines, the worst being the Great Irish Famine, which lasted from 1845 - 1849 and killed about a million people. As a result Ireland experienced a widespread exodus - mostly to the United States. By the end of the 19th century, almost 50% of immigrants into the United States hailed from Ireland.

This map was engraved by J. and C. Walker and published under the superintendence of the Society for the Diffusion of Useful Knowledge, or S.D.U.K. Although the Society formally closed its doors in 1848, subsequent reissues of the S.D.U.K. atlas were printed well into the 1870s by Chapman and Hall, who acquired the original plates.