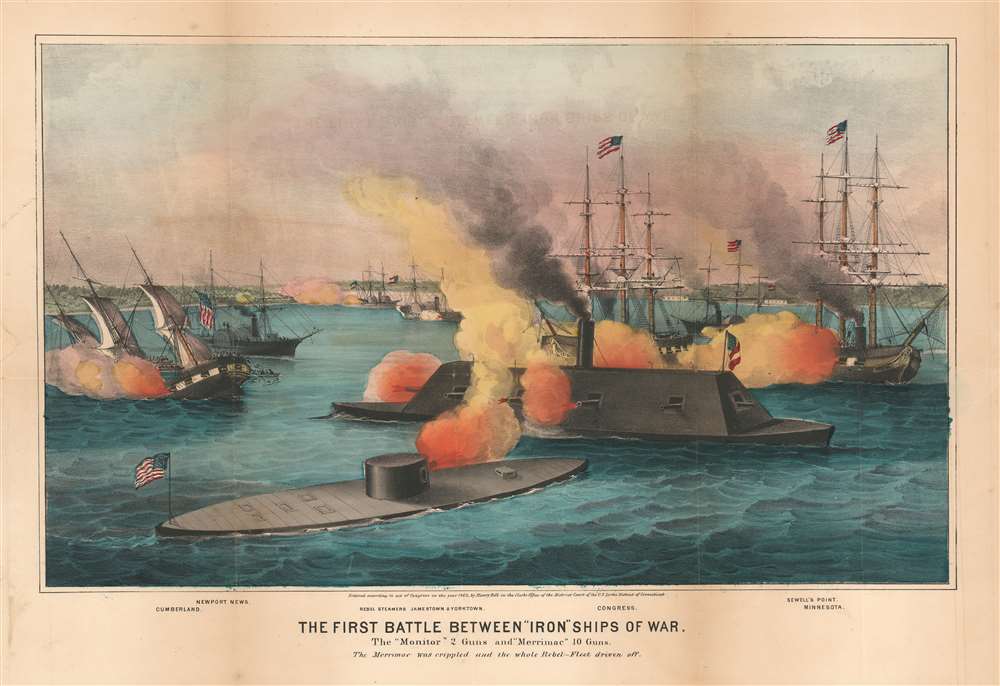 This is an 1862 Henry Bill chromolithograph view of the Battle of Hampton Roads (March 8 - 9, 1862), a naval battle during the American Civil War, renowned as the first naval battle between ironclad ships. The USS Monitor, the Union ironclad, occupies the foreground and bears a U.S. flag on her stern. She fires on the CSS Virginia, the Confederate ironclad, at close range. Other ships involved in the battle, including the USS Cumberland, USS Congress, and USS Minnesota appear as well, along with several Confederate ships.

Both the Cumberland and the Congress were destroyed by the Virginia during the first day of the battle. The Virginia rammed the Cumberland and she sank rapidly. After this initial success, the captain of the Virginia engaged the Congress. The ships fought and Virginia benefitted from the help of the rest of the James River Squadron. After an hour of unequal combat, the Congress struck her colors and surrendered. In retaliation for being fired upon by a Union shore battery, the captain of the Virginia fired on the Congress with hot shot (red-hot cannonballs). Congress caught fire and burned for the rest of the day and, near midnight, the fire spread to her magazine. This caused an explosion and Congress sank stern first. After dispatching Cumberland and Congress, Virginia moved to engage Minnesota, which had run aground. However, night was falling, and darkness forced Virginia to return to port, granting Minnesota a reprieve.

The Monitor and the Virginia were not the world's first ironclads, but they were the first to see combat. The Virginia was built on the burnt-out remains of the USS Merrimac, which was inadequately scuttled when the Union evacuated Norfolk's shipyards, hence the Virginia is also referred to as the Merrimac. The Monitor was built from scratch as an ironclad in Greenpoint, Brooklyn. Monitor was dispatched to Hampton Roads to defend the Minnesota against the Virginia. Monitor engaged Virginia on the morning of March 9, 1862, when Virginia moved to destroy the Minnesota. Monitor and Virginia fought for hours at close range and neither were able to beat the other. Virginia had not expected to encounter another ironclad, so she was not armed with iron-piercing ammunition. Monitor was armed with guns large enough to pierce Virginia's armor, but the shipbuilder feared that using thirty-pound charges could damage the ship, so only fifteen-pound charges were used. The battle ended after a shell from Virginia hit Monitor's pilot house and temporarily blinded its captain, forcing her to temporarily disengage. Virginia's captain believed that the Monitor disengaged because she was leaving the battle and elected to head back to port to undergo repairs. When Monitor returned to the battle and saw Virginia withdrawing, they erroneously believed she had given up. Thus, both ship's captain's declared victory.

The View as Propaganda

Since the reality of the battle does not reflect the statement made here, that 'The Merrimac was crippled and the whole Rebel-Fleet driven off', this view celebrates a victory that was in fact a stalemate. Both sides declared victory. The Confederate Secretary of the Navy lauded the performance of the Virginia and the other vessels in a letter to Confederate President Jefferson Davis, while the crew of the Monitor received the official thanks of Congress and Quartermaster Peter Williams was awarded the Medal of Honor.

This view was created and published by Henry Bill in 1862. Two examples are cataloged in OCLC and are part of the institutional collections at the Library of Congress and the Boston Athenaeum.