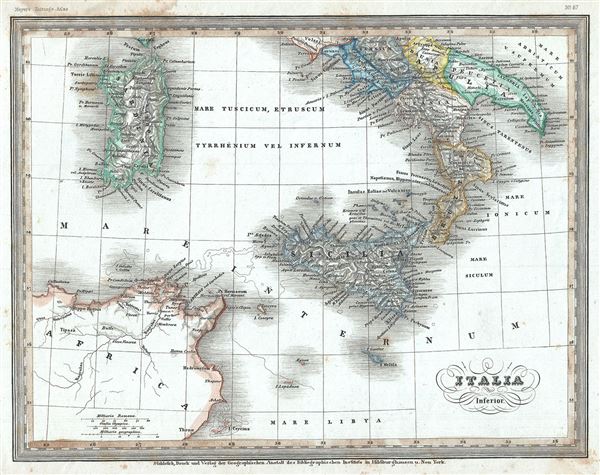 This is a fine 1852 Joseph Meyer map of southern Italy during ancient Roman times. It covers the southern part of Italy from Anzio (Antium, as it was called in ancient times) south past Sicily to the Kerkennah Island (Cercina Island, a port and look-out point for the Romans in ancient times) off the coast of Tunisia, Africa. The island of Sardinia is included. The map shows extraordinary detail and notes ancient cities, islands, rivers, offshore features and other topography. The Roman regions of Sicilia, Lucania, Brutii, Apulia, Samnium and Campania are also noted. During the first centuries of the Imperial Rome, Italia was the territory of the city of Rome rather than a province, and enjoyed a special status such that the armies of military commanders were not allowed into the region.

This map was issued as plate no. 87 in Meyer's Zeitung Atlas. Although all the maps in this atlas are not individually dated, the title page and maps were often updated while the imprint with the date was not, causing confusion to the exact date for some of the maps. Moreover some maps in the atlas were taped in at a later date as an update to the atlas. We have dated the maps in this collection to the best of our ability.