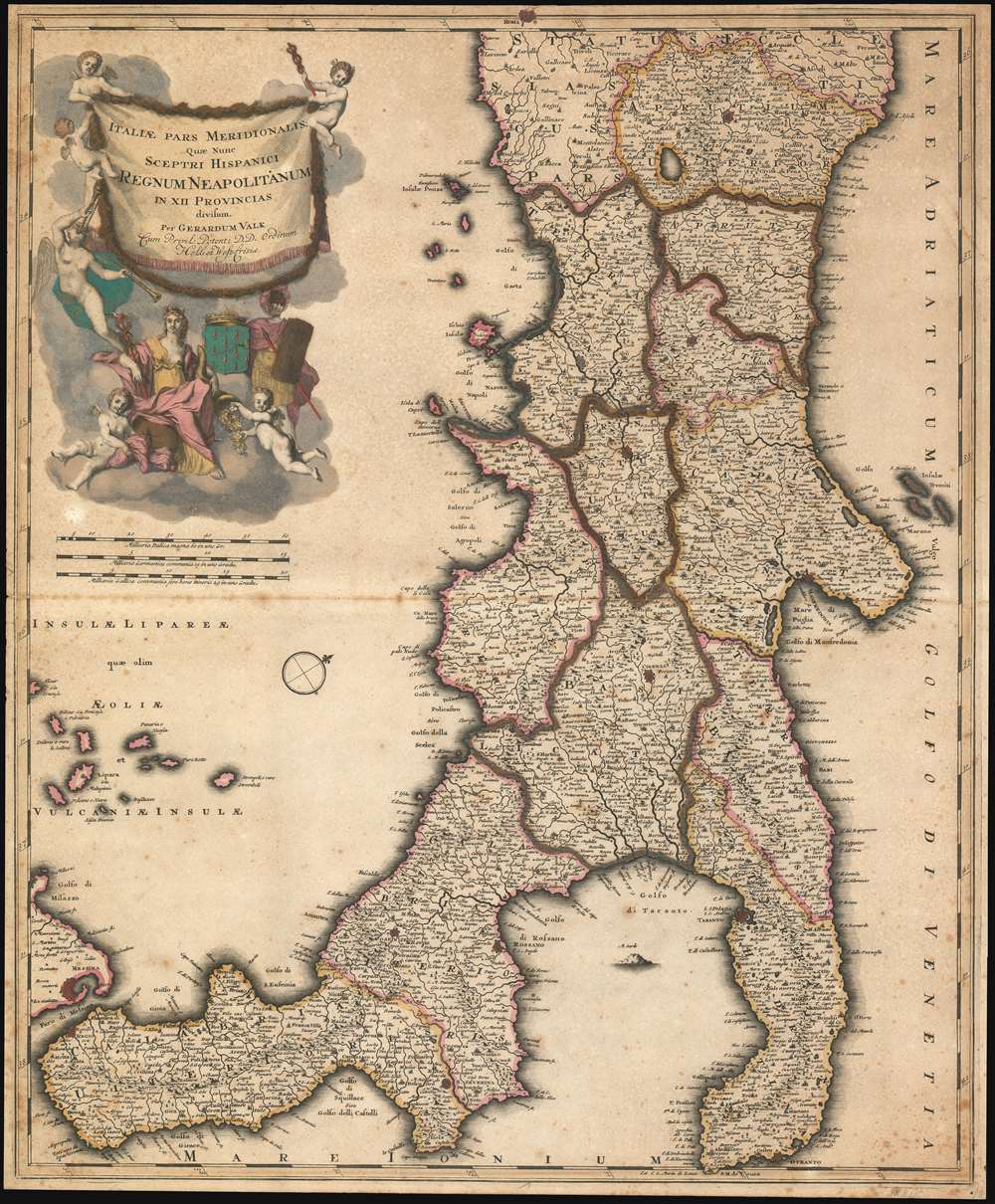 A rare c. 1704 Gerard Valk (Valck) map of southern Italy. Strictly oriented to the northwest, the map covers peninsular Italy from roughly Rome to the southernmost extremes of Calabria and Puglia. In the upper left, there is an elaborate title cartouche bearing the arms of the Kingdom of Naples, putti, and other allegorical content.
The Crypto-Island of 'M. Sardo'
As authoritative as Magini's 1608 wall map Italia Nuova was, one of its hallmarks - and those maps based on it - was the placement of a mysterious mountainous island 'M. Sardo'  in the Gulf of Taranto. Despite being reproduced faithfully on near every 17th century map of the peninsula, the origins of this imaginary island have long been obscure. More recently, the scholar/collector Vladimirio Valerio discovered a interesting notation on the Otranto map in the 1595 Stigliola manuscript Atlas of the Kingdom of Naples (added to his collection in 1975). On that manuscript, a crude mountain-hump is mapped in the Gulf of Taranto - the first known instance in print or otherwise of any such 'M. Sardo' in those waters. While no such island or mountain actually exists, there is, near the tip of Otranto, a mountaintop village - Monte Sardo - notable for its visibility both from the Gulf of Otranto and the Gulf of Venice. Thus the manuscript 'M. Sardo' is a crude coastal profile highlighting a observable coastal navigational feature. Valerio's theorizes that, in compiling his masterpiece map of Italy, Magini consulted the Stigliola as the best and most detailed map of southern Italy. In doing so, he misinterpreted the navigational notation, preserving it as a literal mountain in the middle of the Gulf, and retaining the name M. Sardo. Magini's work was so authoritative that Blaeu copied the map, errors and all; and in turn, with few exceptions, the rest of the European mapmaking community followed.
Publication History and Census
This map was first published by Gerard Valk sometime around 1700, with most authorities suggesting 1704. It was published in Valk's rare atlas Nova Totius Geographica Telluris Proiectio, of which there are only 2 known surviving examples. Separate issue examples are found in composite atlases dating as late as 1730. This map is rare, with no market history and examples known only in 2 institutions.

OCLC 159800435. Gunther, R. T., A Bibliography of Topographical and Geological Works on the Phlegraean Fields, p 34.
Looking for a high-resolution scan of this?