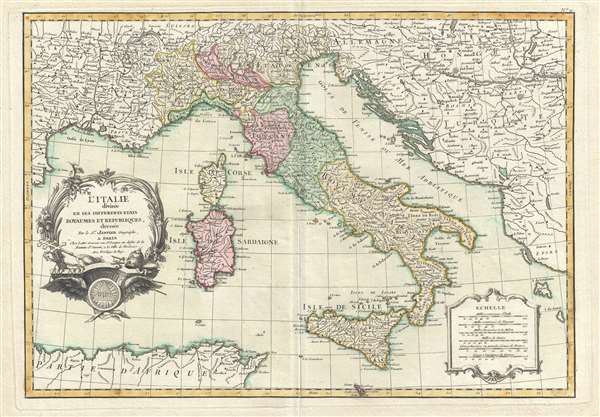 This is a 1762 Jean Janvier map of Italy. The map depicts from the Gulf of Lyon to parts of Hungary and Turkey in Europe and from Lake Geneva in Switzerland to Sicily and North Africa. Depicting the Italian peninsula prior to its struggle for national solidarity, the peninsula remains divided into numerous independent states, duchies, republics, kingdoms and the Papal States (Etat de l'Eglise). Myriad rivers and numerous cities and towns are labeled throughout Italy and the adjacent territory in France and across the Adriatic (also referred to here as the Golfe de Venise, or the Gulf of Venice). Both Corsica and Sardinia are depicted. An elaborate title cartouche featuring Papal accoutrements appears on the lower left. A secondary cartouche bearing six distance scales appears on the lower right.

This map was drawn by Jean Janvier and included in the first edition of Jean Lattre's 1762 issue of the Atlas Moderne.