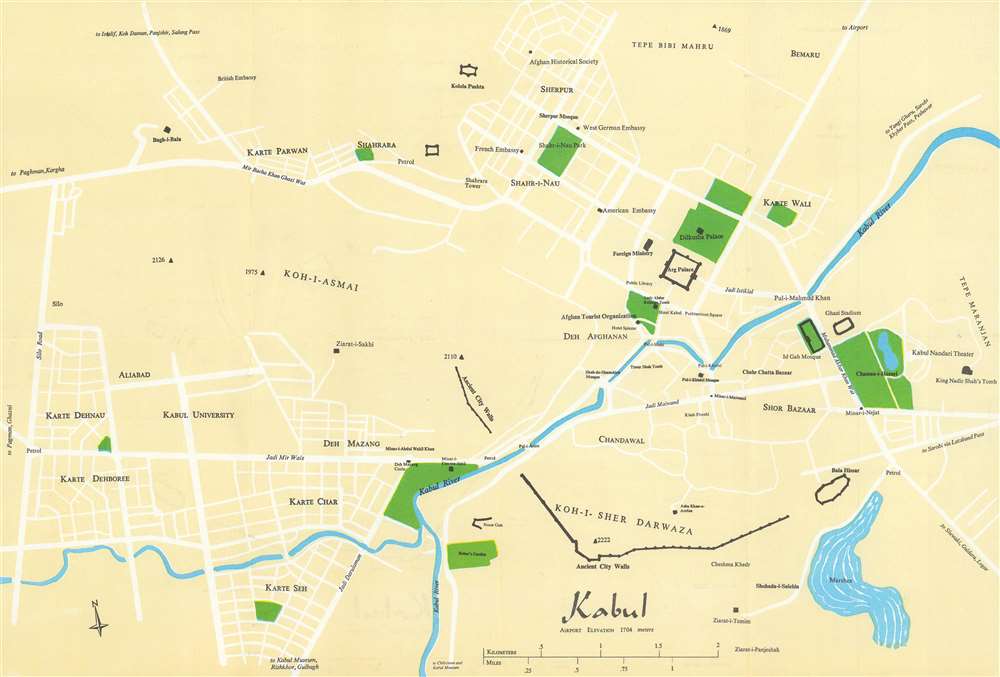 Published by 'The grandmother of Afghanistan'.
$100.00

This is a first edition 1965 Nancy Hatch Dupree tourist city plan or map of Kabul, Afghanistan. Although Afghanistan may not seem like a tourist mecca today, not long ago, it was considered to be among the most beautiful and welcoming places in Central Asia. Neighborhoods are labeled along with several important buildings. These include the Id Gah Mosque, the Dilkusha Palace, the Arg Palace, the Foreign Ministry, the Afghan Historical Society, Kabul University, and the American, West German, and French Embassies. City parks are shaded green and the ancient city walls are also illustrated. Only major streets are labeled but many are illustrated.

This map was created for and published in An Historical Guide to Kabul written by Nancy Hatch Dupree and published by the Afghan Tourist Organization in 1965. The guide is well represented institutionally, but the first edition is scarce on the private market today.

Nancy Hatch Dupree (October 3, 1927 - September 10, 2017) was an American-Afghan historian principally concerned with preserving the history of modern Afghanistan. Born in Cooperstown, New York, she spent her childhood in India, where he father supervised an agricultural project. Her family then moved to Mexico when she was in high school. She enrolled at Barnard College in 1945. At Barnard she studied Chinese language and culture and enjoyed a wide range of activities, from knitting to playing the harp. After graduating from Barnard she began a Master's degree in Chinese Art at Columbia, where she met her first husband, Alan D. Wolfe. Her husband worked in the foreign service (some say he was an intelligence officer) and the couple lived in Sri Lanka, Iraq, and Pakistan, before settling in Afghanistan in 1962. The 'normal' role of a diplomat's wife did not suit Dupree, who almost immediately began working on the first English-language guidebook to the Bamiyan Buddhas called The Valley of Bamiyan. After completing the manuscript, at the suggestion of a friend she showed it to Louis Dupree, a fellow expat, who was an archaeologist and anthropologist. Louis, who was also married, and Nancy soon became a couple, and their spouses also began dating. Both couples eventually married (after divorcing their previous spouses of course). The Duprees lived in Afghanistan until the Soviet invasion in 1979, when they fled to Pakistan, where Nancy Dupree helped fellow refugees. At some point, the couple moved to North Carolina where Louis became a professor at Duke University. While at Duke, Louis began building an archive about Afghanistan, which included some 20,000 slides of his archaeological digs that dated back as early as the 1940s. Nancy and Louis founded the Agency Coordinating Body for Afghan Relief (ACBAR) and began collecting both government and non-government documents relating to Afghanistan's history and culture, the Mujahedeen, the Soviet invasion, and the Taliban. Louis died in 1989, and Nancy took over the job as archivist. Nancy moved back to Kabul in 2005 and began searching for a place for ACBAR's archive with the help of the Afghan government. In 2012, the collection was moved to Kabul University and the name was changed to the Afghan Center at Kabul University (ACKU). The ACKU has collaborated with the University of Arizona Libraries to digitize part of their collections. Today, over 1.7 million documents in Past, Persian, and English are part of The Afghan Digital Repository. Nancy Dupree died in Kabul at the age of 89 and has been called 'the grandmother of Afghanistan'. She is buried in Kabul. Learn More...