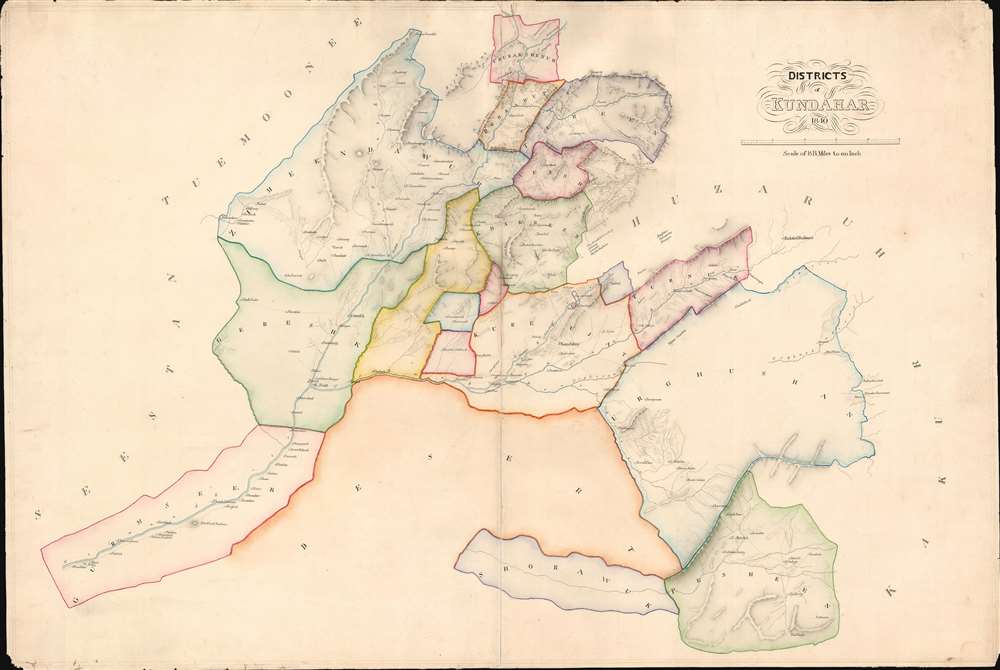 An exquisitely drafted manuscript map of the Kandahar Region, Afghanistan, during the First Anglo-Afghan War (1839 - 1942). Resplendently drafted and colored by the Indian Quartermaster General's Office (QMG), the map incorporates traditional Bengali handmade inks. During this conflict, Kandahar was the most important British base in Afghanistan, and the surrounding region was a theater of fierce and constantly evolving guerrilla war. The present map is the result of direct field mapping, completed under onerous war-footing, yet nonetheless represents one of the earliest broadly accurate maps of the Kandahar region. The map is roughly centered on the city of Kandahar and presents a stellar overview of the surrounding region, extending from Girishk and the Helmand Valley, in the west, to Qalati Giliji, in the east, covering parts of the modern Afghan provinces of Helmand, Kandahar, Uruzgan and Zabol. It is, moreover, one of very few surviving original manuscript maps from First Anglo-Afghan War, the first (not the last) major western foray into Afghanistan.

No significant mapping of the Kandahar region occurred before 1838 and the First Anglo-Afghan War. In December of 1838, in anticipation of field action, the QMG sent the military surveyor William Fraser-Tyler to begin preliminary covert reconnaissance. Fraser-Tyler's work yielded basic cartography for the districts to the north and west of Kandahar, including the Helmand and Arghandab valleys. Additional survey work in the regions west and southwest of Kandahar was completed during the 1839 British occupation under Major William Garden and Captain John Paton. While the presently offered map directly copies neither, and there is no other antecedent map, there is some evidence that the draftsman had access to and referenced both works.

The overall mastery of execution suggests that the map was drafted in one of the primary QMG branches, likely either Calcutta or Simla, rather than in Kandahar itself. The reader will note, that while on a large scale, the detail here is insufficient for planning tactical maneuvering. Instead, it was most likely produced for the exclusive use of senior military and civilian officials planning the war in southern Afghanistan. The clear delineation of tribal boundaries, roads, and waterways, and villages makes this map perfect for large scale strategizing.