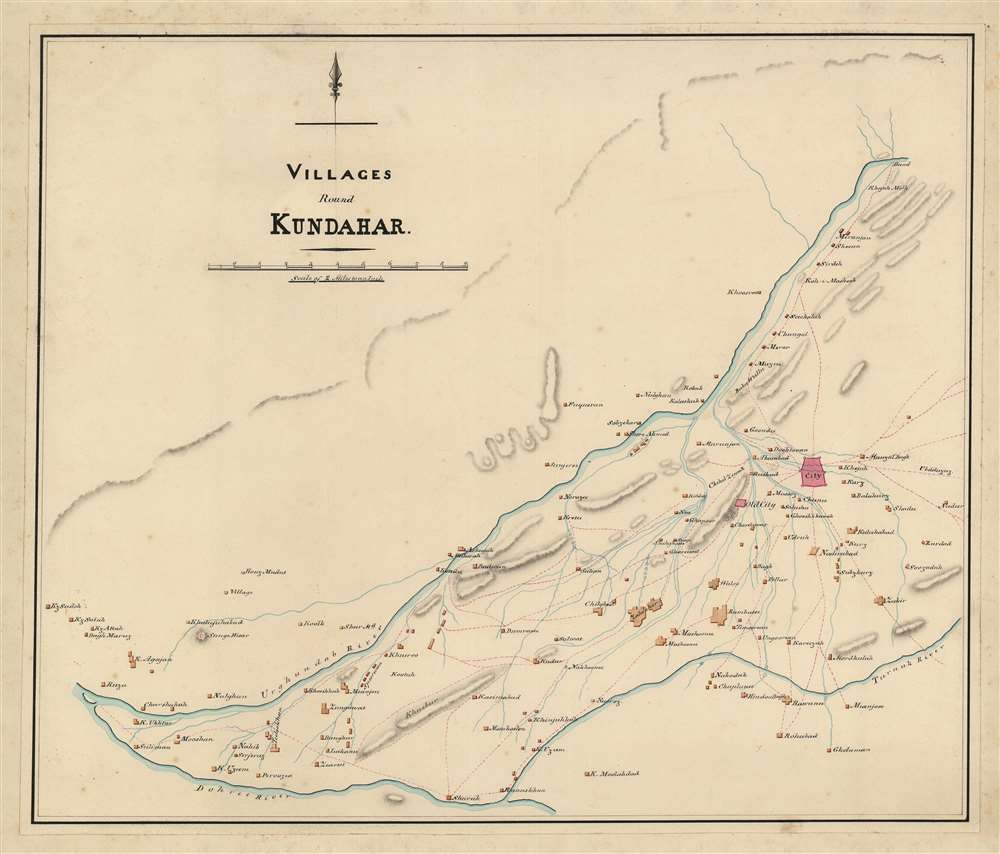 A one-of-a-kind manuscript map of Kandahar and its immediate surroundings during the First Anglo-Afghan War.
$2,500.00

An exquisitely drafted manuscript map of the Kandahar, Afghanistan, and its immediate environs during the First Anglo-Afghan War (1839 - 1942). Resplendently drafted and colored by the Indian Quartermaster General's Office (QMG), the map incorporates traditional Bengali handmade inks. During this conflict, Kandahar was the most important British base in Afghanistan, and the surrounding region was a theater of fierce and constantly evolving guerrilla war. The present map must be the result of direct field mapping, likely completed under wartime conditions, yet nonetheless represents one of the earliest accurate maps of Kandahar and its immediate vicinity. With Kandahar (labeled simply as 'City') situated close to the right border, the map depicts the region in detail, identifying numerous villages and using boxes of varying size to indicate each villages population relative to all the others. The Urghundhab River flows diagonally across the map, and two major tributaries, the Dohree River and Turnuk River, are identified while dozens of smaller ones are illustrated. Red dashed lines mark roads between the settlements, with nearly all of them leading back to Kandahar. This is, moreover, one of very few surviving original manuscript maps from First Anglo-Afghan War, the first (not the last) major western foray into Afghanistan.

No significant mapping of the Kandahar region occurred before 1838 and the First Anglo-Afghan War. In December of 1838, in anticipation of field action, the QMG sent the military surveyor William Fraser-Tyler to begin preliminary covert reconnaissance. Fraser-Tyler's work yielded basic cartography for the districts to the north and west of Kandahar, including the Helmand and Arghandab valleys. Additional survey work in the regions west and southwest of Kandahar was completed during the 1839 British occupation under Major William Garden and Captain John Paton. While the presently offered map directly copies neither, and there is no other antecedent map, it is likely that the draftsman had access to both and could have referenced them when composing this piece.

The overall mastery of execution suggests that the map was drafted in one of the primary QMG branches, likely either Calcutta or Simla, rather than in Kandahar itself. It was likely produced to provide officials in India in charge of war planning an idea of the area immediately surrounding Kandahar. Since Kandahar served as the main British base during the First Anglo-Afghan War, hostilities and guerrilla attacks continued throughout the war. By producing this map, military leaders in India could have more concrete understanding of the dispatches they received from commanders in the field.

Very good. Mounted on another sheet of paper.
Looking for a high-resolution scan of this?