1861 Johnson Map of Kentucky and Tennessee 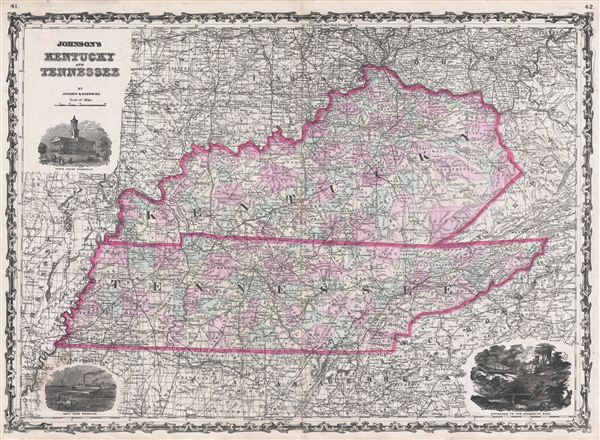 1861 Johnson Map of Kentucky and Tennessee

A beautiful example of A. J. Johnson's 1861 map of Kentucky and Tennessee. Probably the most decorative of Johnson's Kentucky-Tennessee series, this rare map offers a fascinating snapshot of these secessionist states shortly following the outbreak of the American Civil War. Map shows both states in full with color coding according to county. engraved decorative views of the 'State House Nashville,' the 'Navy Yard Memphis,' and the 'entrance to the Mammoth Cave' decorate the upper left, lower left, and lower right hand quadrants, respectively. Features the strapwork style border common to Johnson's atlas work from 1860 to 1863. Published by A. J. Johnson and Browning as plate numbers 41-42 in the 1861 edition of Johnson's New Illustrated Family Atlas. This is the last edition of the Johnson Atlas to bear the 'Johnson and Browning' imprint. Subsequent editions reflect Ward's 1862 acquisition Ross C. Browning's shares in the firm.