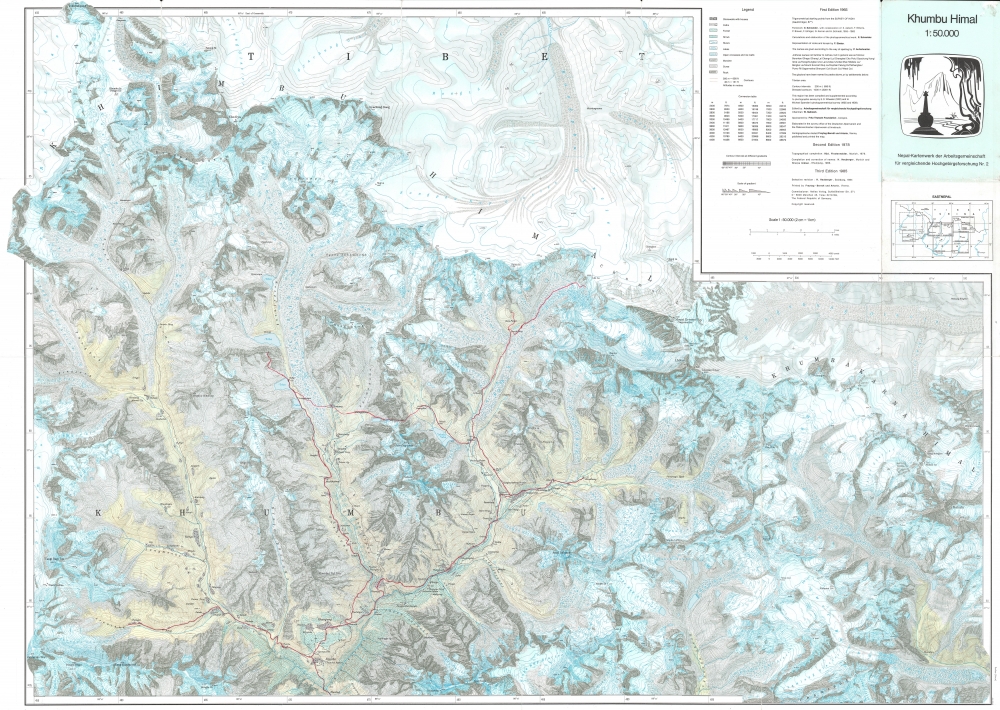 Illustrates in detail the Himalayan region in the vicinity of Mount Everest and includes manuscript notations about a trek!
$500.00

This is a striking 1985 Helmut Heuberger and Working Group for Comparative High Mountain Research (Arbeitsgemeinschaft für vergleichende Hochgebirgsforschung) map of Mount Everest and vicinity. The map depicts the region from the Lunag Glacier and Pigpherago Shar to Khumbakarna Himal and Chomo Lönzö and from Jobo Rabzang to Chamlang and Iswa La. Numerous locations throughout the region are identified, including Mount Everest (Sagarmatha), which is situated just below and to the left of the key. Red manuscript notations trace the route followed by an expedition through the mountains, eventually reaching the top of the Khumbu Glacier within sight of Mount Everest. Towns, villages, and other settlements are labeled, including Nauche (Namche Bazar), one of the waypoints on almost all treks to Mount Everest, and one of the places through which the expedition traced here stopped. Himalayan peaks are identified throughout, complete with their elevations (provided in meters), as are glaciers and lakes. Contour lines cover the whole piece, since knowing the elevation one is going to traverse is one of the most important aspects of a trek through the Himalayas. A key situated in the upper right corner includes a legend, a conversion table from meters to feet, and a publishing history of the map.

Helmut Heuberger (January 8,1923 - November 16, 2011) was an Austrian geographer and high mountain researcher. Born in Innsbruck, Austria, he attended elementary and high school there, where he was an enthusiastic member of the Hitler Youth. After completing the Reich Labor Service (a law requiring all young Germans to work for the National Socialist German Reich for a certain period of time), Heuberger volunteered for the military service. He entered the military in October 1941 and served in an anti-tank unit (Panzerjägerkompanie) on the Eastern Front. He was severely wounded at Stalingrad in February 1943 and was discharged as he was physically unable to fight. Per Claire Mulley in her book The Women Who Flew for Hitler, Heuberger became increasingly disillusioned with the Nazi Party and its leaders after his return from the Easter Front and concluded that his loyalties should lie with the German Reich and not the Führer and his deputies. Mulley states that Heuberger even helped support the Austrian resistance soon after making this decision. The winter after returning from the war, Heuberger began studying geography, geology, history, ethnology, and German at the University of Innsbruck and graduated in 1952. He held various posts at Innsbruck before accepting a position as an assistant at the Geographical Institute in 1958. During the post-war years, Heuberger also became involved with the paramilitary group the Liberation Committee of South Tyrol. After what has become known as the Night of Fire, the organized bombing of thirty-seven electricity pylons supplying power to the industrial zone of Bolzano, Heuberger even. took over leadership of the group for a short time. In 1966, Heuberger was sentenced in absentia to thirty years in prison by a court in Milan after being connected to a series of explosive attacks committed by the group. Heuberger never served any time in prison. Instead, he finished his habilitation thesis in 1965 and held posts as a guest lecturer in Hamburg and at FU Berlin before becoming an associate professor at the University of Munich in 1972. He became the chair of the Department of Geography at the University of Salzburg in 1980 and served as the Dean of the Faculty of Natural Sciences of the University of Salzburg from 1987 - 1989. He retired in 1991. Heuberger married Dr. Adhelheid Hardorp (March 29, 1929 - September 5, 2006) in 1956 and Ilse Meyer (1922 - 2011) in 2008. Learn More...