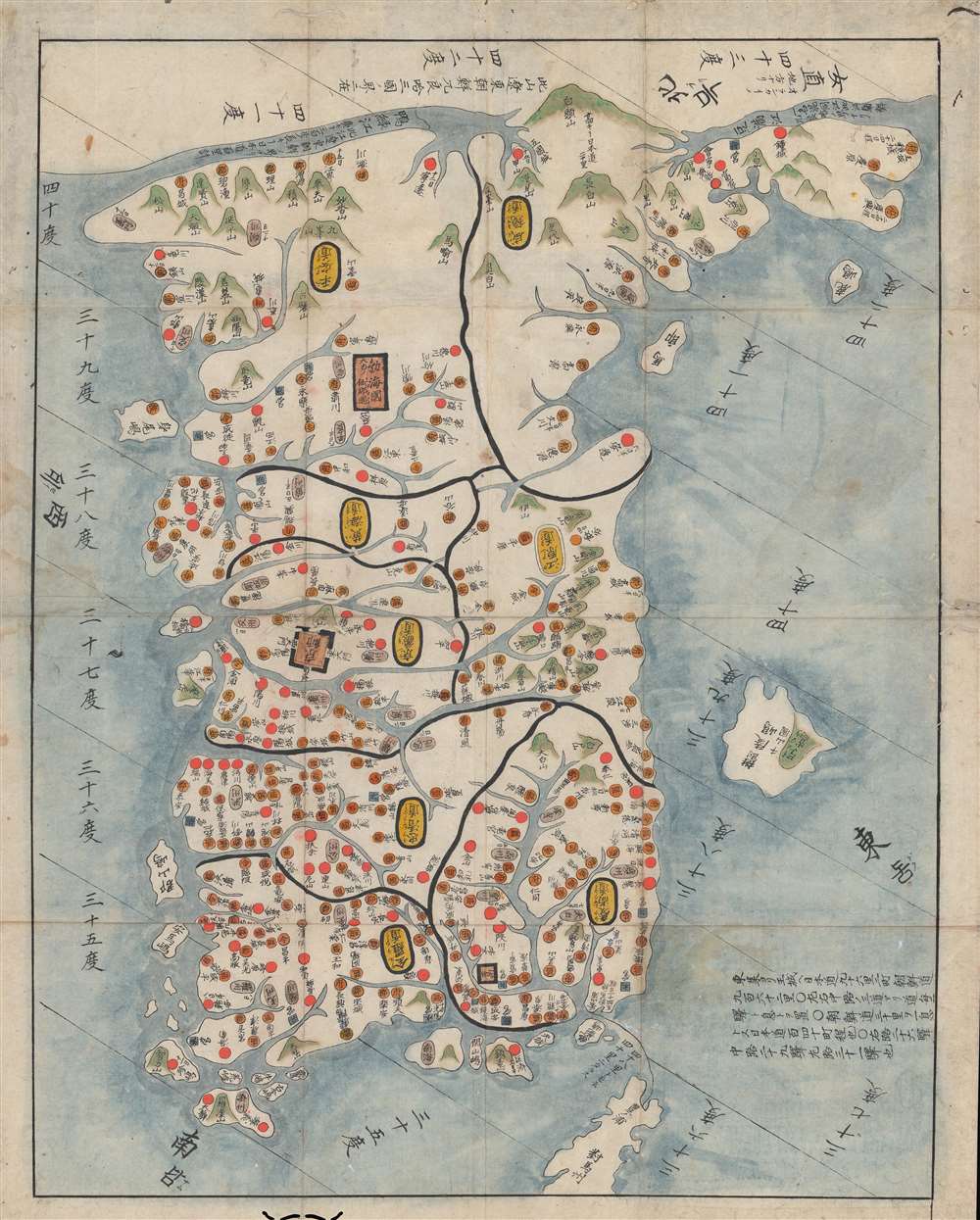 A banned map! This very rare c. 1785 manuscript map of Korea prepared by Hayashi Shihei. This map was drawn to illustrate Shihei's Sangoku Tsuran Zusetsu (Illustrated General Survey of the Three Countries). It covers all of Korea as well as the adjacent islands (including the disputed Dokdo). Shihei's work advocated for gathering intelligence about foreign lands for defense of Japan but was banned by the Tokugawa Shogunate as part of its isolationist policy. Almost all of the original woodblock printed versions of Sangoku Tsuran Zusetsu were collected and destroyed. Nonetheless, word of Shihei's work got out and manuscript copies of his maps began to circulate in learned Japanese circles. Today, most known examples of Shihei's work are in manuscript.

Hayashi Shihei (August 6, 1738 - July 28, 1793) was a Japanese military scholar, political theorist, and retainer of the Sendai Domain. His name is sometimes misread (according to the Sino-Japanese reading) as Rin Shihei. Shihei was deeply concerned with the rise of western military and naval power. In particular he saw Russia's expansion into East Asia as a long term threat to Japanese sovereignty. He lobbied the Tokugawa Shogunate for a strengthening of Japan's defenses and advocated supplementing traditional Samurai training with courses in Western military science. In particular he expressed concerns with the traditional role of the samurai as an independent warrior and stressed teamwork exercises, or choren. He published several important books, including the 1791 Kaikoku Heidan (i.e. Discussion concerning military matters of a maritime nation and the 1786 Sangoku Tsuran Zusetsu (Illustrated Description of Three Countries). This later work included five important maps illustrating Japan, Korea, and the Ryukyu Islands, including Taiwan. Since his work was published without authorization from the bakufu (government), and criticized the Shogun's commerce with foreign powers, Hayashi fell out of favor. Most of his works were subsequently seized and, along with their original woodblock printing plates, destroyed. Consequently, most surviving examples of the five Shihei Maps are manuscript, copied by hand and handed down in secret from generation to generation. Eventually a copy of Sangoku Tsuran Zusetsu was taken to Siberia, translated into French, and published in Paris in 1832. Hayashi's legacy was thus preserved and, together with Takayama Hikokuro and Gamo Sanbei, he is remembered as one of the "Three Excelling Men of the Kansei Period" (Kansei no san-kijin).

Shihei, H., Sangoku Tsuran Zusetsu, 1785.     Shihei's Sangoku Tsuran Zusetsu describes Joseon Korea, the Ryukyu Kingdom, and Hokkaido. It was one of the first Japanese works to relate Japan to its neighbors and as such was banned by the Edo government in 1792. Almost all of the original woodblock printed versions of Sangoku Tsuran Zusetsu were thus collected and destroyed. Nonetheless, world of Shihei's work got out and manuscript copies of his maps began to circulate in learned Japanese circles. Today, Shihei's work appears primarily in manuscript with original woodcut examples being exceedingly scarce. An example of this work eventually found its way to Europe, where it was published in by Julius Klaproth (1783-1835).

Short, J. R., Korea: A Cartographic History, plate 4.6.
Looking for a high-resolution scan of this?