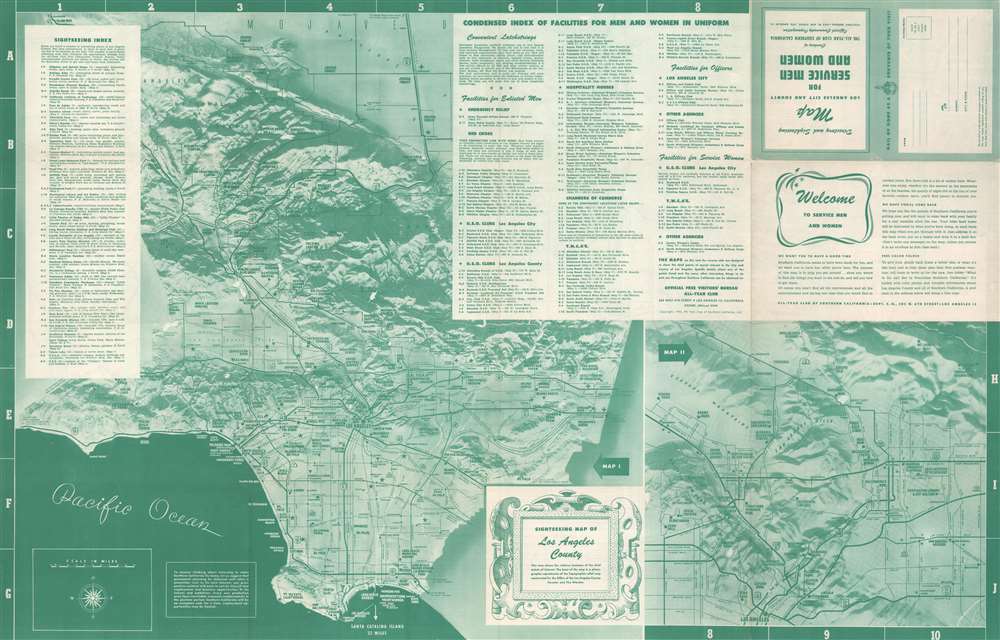 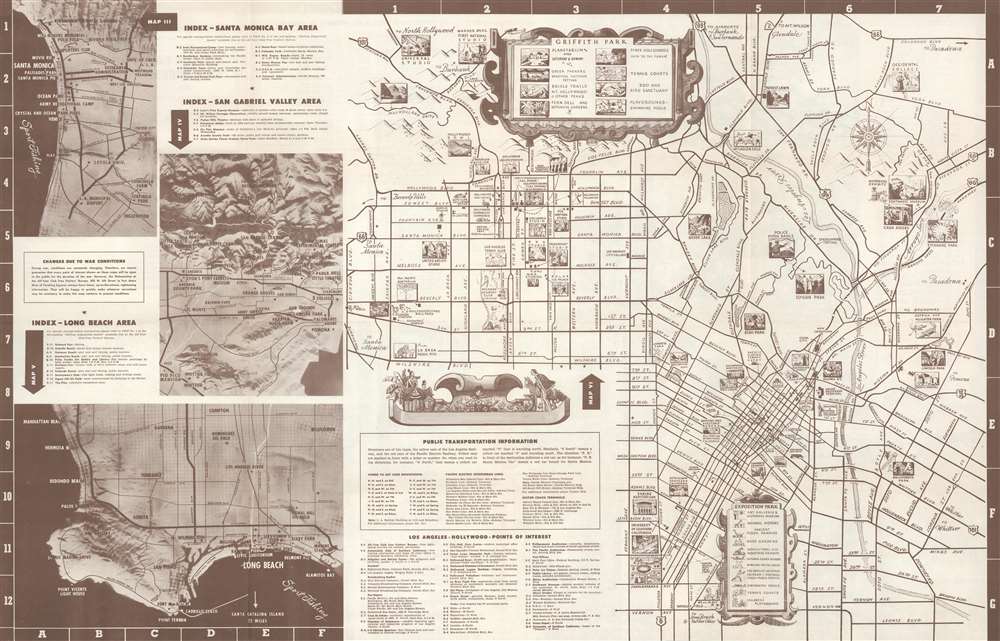 This is a 1945 All-Year Club of Southern California map of Los Angeles. Created for American servicemen and women during World War II, the map highlights U.S.O. clubs, Y.M.C.A.s, Y.W.C.A.s, and Red Cross facilities. Tourist sites throughout are identified. On the county map, which occupies the recto, sites from Joshua Forest west to the coast are highlighted, including parks, universities, the Rose Bowl (for college football fans), and a chinchilla farm. The smaller map on the recto, which occupies the lower right corner, focuses on the immediate environs of Los Angeles, illustrating the road network.

Four inset maps occupy the verso and detail the Santa Monica Bay, San Gabriel Valley, Long Beach, and the city of Los Angeles. Sites are labeled throughout all four maps. However, the map of Los Angeles is by far the most charming, using pictorial vignettes to highlight the city's sites. Theatres, movie studios, parks, and museums benefit from this treatment.

The All-Year Club of Southern California

By the 1910s, Southern California was already a winter destination, a haven for easterners keen to escape New England winters. By the early 1920s, businessmen realized tourism need not be seasonal; Southern California's 'amazing' weather could draw visitors year-round. In 1921, a group of nineteen Southern California businessmen, led by Harry Chandler (the publisher of the Los Angeles Times), created the All-Year Club of Southern California as a spin-off of the Los Angeles Chamber of Commerce. The club lobbied the county Board of Supervisors for funding to sell southern California as a summer resort. The push began in Texas, Arizona, and Oklahoma, where residents would see L.A.'s ninety degrees days with low humidity as relief from the sweltering Midwestern summer. That year, a single large resort reported a daily increase of 100 visitors. Likewise, the Santa Fe, Southern Pacific, and Union Pacific railroads reported record ticket sales during the summer of 1921. These early successes were proof of concept for the All-Year Club, and so it expanded promotion. Numbers continued to rise, as did the Club's budget, and by 1926 the All-Year Club was spending $450,000 on advertising and promotional material. However, not everything was positive. Even though SoCal was booming, ads called only tourists, not job-seekers. The ads stated categorically that tourists were welcome, but job-seekers were not, since they would not be able to find work. Nonetheless, the hopeful unemployed came, leading to an ongoing population boom. The All-Year Club of Southern California operated under that name until 1968, when it became the Greater Los Angeles Visitors and Convention Bureau, which later merged with the Southern California Visitors Council. Until 2012, the organization had been known as LA Inc., and today it is the Los Angeles Tourism and Convention Board.

This map was created for and published by the All-Year Club of Southern California in 1945. We note two examples cataloged in OCLC which are part of the collections at the California Historical Society and Stanford University. We are aware of 1944 and 1945 editions. It is possible that editions were published prior to 1944 as well. Examples of this map (in various editions) appear on the private market from time to time.