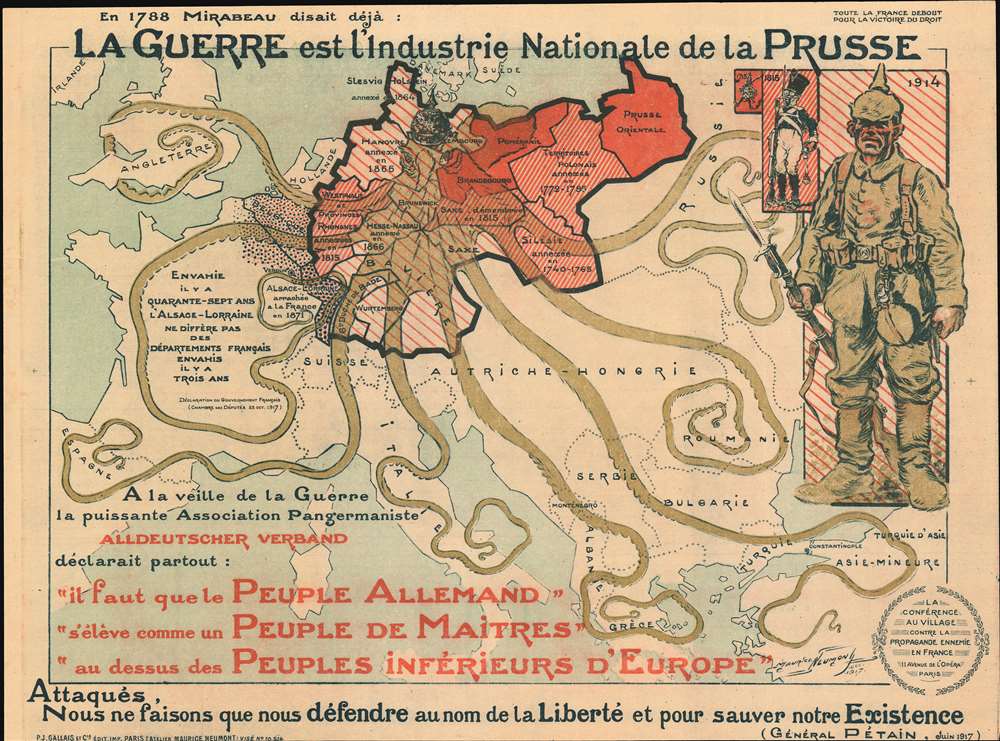 This is a 1917 Maurice Neumont World War I propaganda map of Europe incorporating everyone's favorite cephalopod map monster, the Prussian Octopus, to highlight two centuries of Prussian aggression across Central and Western Europe. The map depicts the region from northeastern Spain to Russia and from England and the North Sea to the Mediterranean Sea and Asia Minor. It is overprinted with pictorial imagery including the Prussian octopus grasping all of Europe in int clutches and a Prussian soldier.

The map octopus made its first appearance in Dutch pictorial maps of the late 19th century, but was popularized by the English satirist Fred Rose, who used it to describe Russian as a threat to western Europe. Here, Neumont's work employs the iconic octopus imagery against Prussia, suggesting that it had spread its influence, like tentacles, throughout Europe. Unified Germany, as it emerged from the 1871 Franco-Prussian War, is here divided into regions with corresponding dates associated with Prussian annexation. Special attention is paid to Alsace-Lorraine, two French departments annexed by Germany after the Franco-Prussian War, said here to have been 'snatched from France in 1871'. Territory invaded by Germany during World War I, marked by red and blue dots, stretches from Switzerland to the English Channel.

Quotations throughout contextualize the map's propagandist imagery. The title, a 1788 quotation by Honoré Gabriel Riqueti, a leader during the early stages of the French Revolution, states that 'War is the Prussian national industry'. This idea is graphically reinforced by the ominous Prussian soldier illustrated along the right border, meant to highlight the extreme growth of the Prussian military since the Napoleonic Era.

The Rise of German Nationalism

Created for La Conférence au Village Contre la propagande ennemie en France, this work was meant to combat enemy propaganda in the provinces. Neumont uses German words to help make his point. Near the bottom there appears a disturbing quote from the ultra-nationalist All-German League, 'The German People must rise like the Master Race over the inferior peoples of Europe'. Just below are the words of French General Phillipe Pétain, the 'Hero of Verdun', 'Attacked, we are only defending ourselves in the name of Liberty and to save our Existence'. A slogan in the upper right corner perhaps best encapsulates the map, 'All of France Standing for the Victory of Law'.

This map was created by Maurice Neumont for La Conférence au Village Contre la propagande ennemie en France in 1917 and printed by P.J. Gallais and Company in Paris. The OCLC catalogues this map as being part of the institutional collections at Brown University, the University of Illinois at Urbana Champaign, and The British Library. We are additionally aware of an example in The PJ Mode Collection at Cornell University.

Maurice Neumont (September 22, 1868 - February 10, 1930) was a French painter, illustrator, and lithographer. Born in Paris, Neumont attended the École des beaux-arts de Paris and became a member of the Society of painter-lithographers in 1903. Neumont was a celebrated propagandist during World War I, making numerous French propaganda posters during the war, for which he was awarded the French Légion d'honneur. His most famous poster featured a French soldier and the phrase On ne passe pas! ('They Shall Not Pass') Learn More...