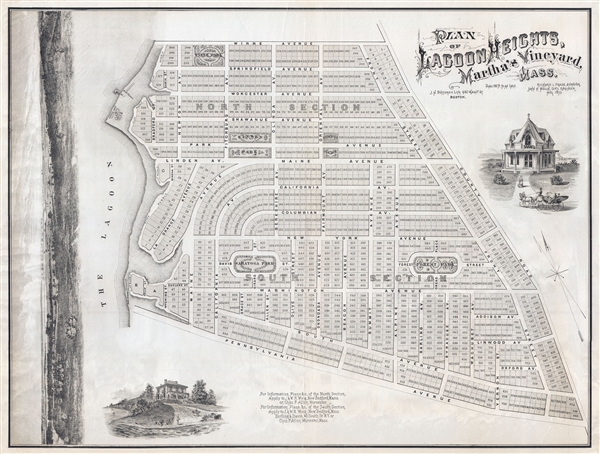 LAGOON HEIGHTS Comprises 200 acres of elevated, pleasant land, interspersed with several shay groves, with half a mile of water FRONT ON LAGOON POND, and extending easterly from the water to the county road connecting Eastville with Edgartown. This is a fine location on the Oak Bluff side of the pond, HALF a mile from Wesleyan Grove.Around the same time the Wings must have commissioned Richard Pease, a surveyor, and John H. Mullin to lay out the new development. The Boston lithography firm of J. H. Bufford compiled their surveys into this impressive broadside, which appeared early in 1873. It must have been an extremely attractive offering. Even so, the winds of fortune were not with the Wing firm. Around the same time this broadside map was published, Jay Coode and Company, a powerful bank in Philadelphia, became overextended building the Northern Pacific Railway and fell suddenly into bankruptcy, triggering the Panic of 1873.