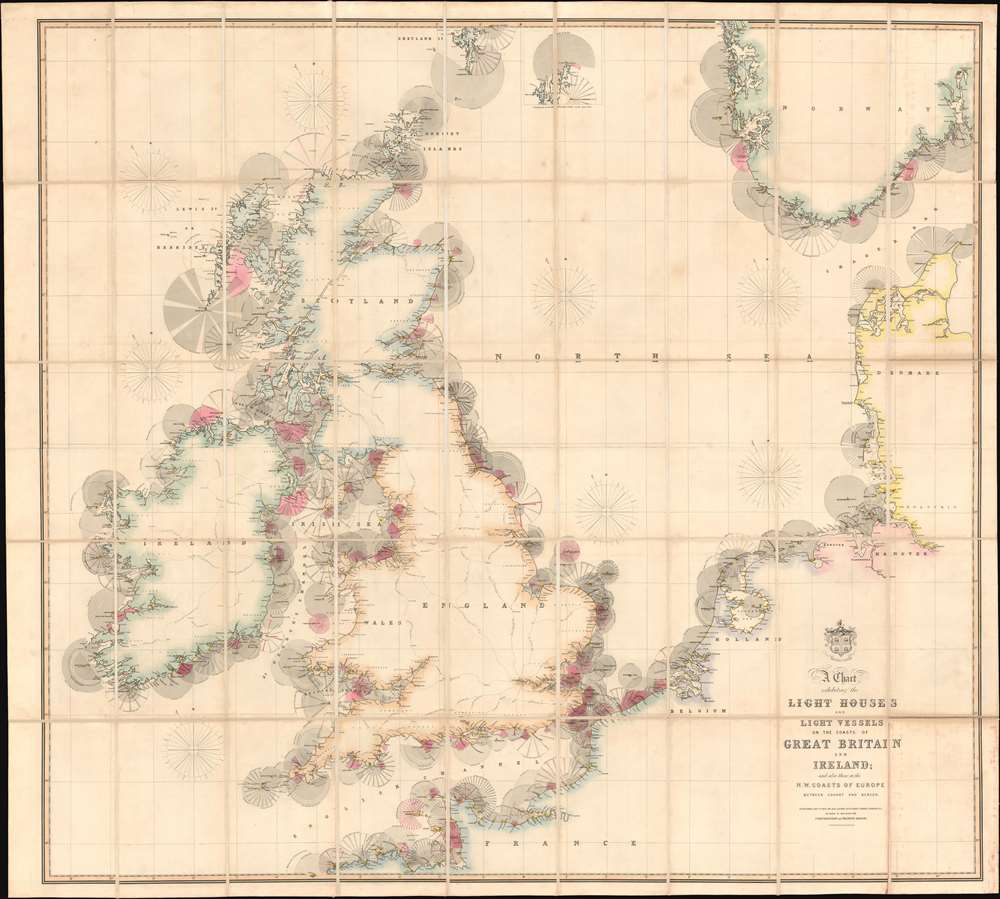 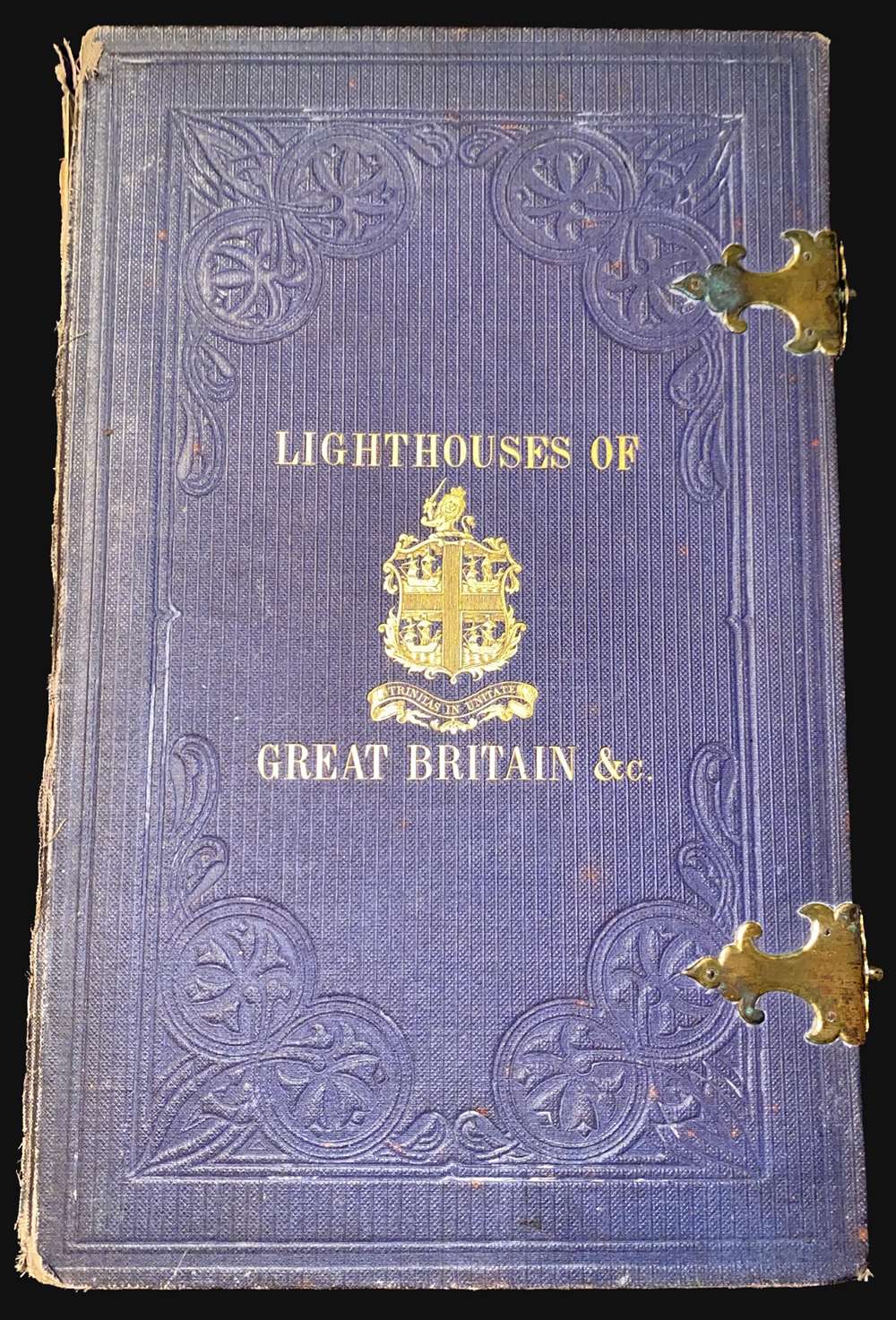 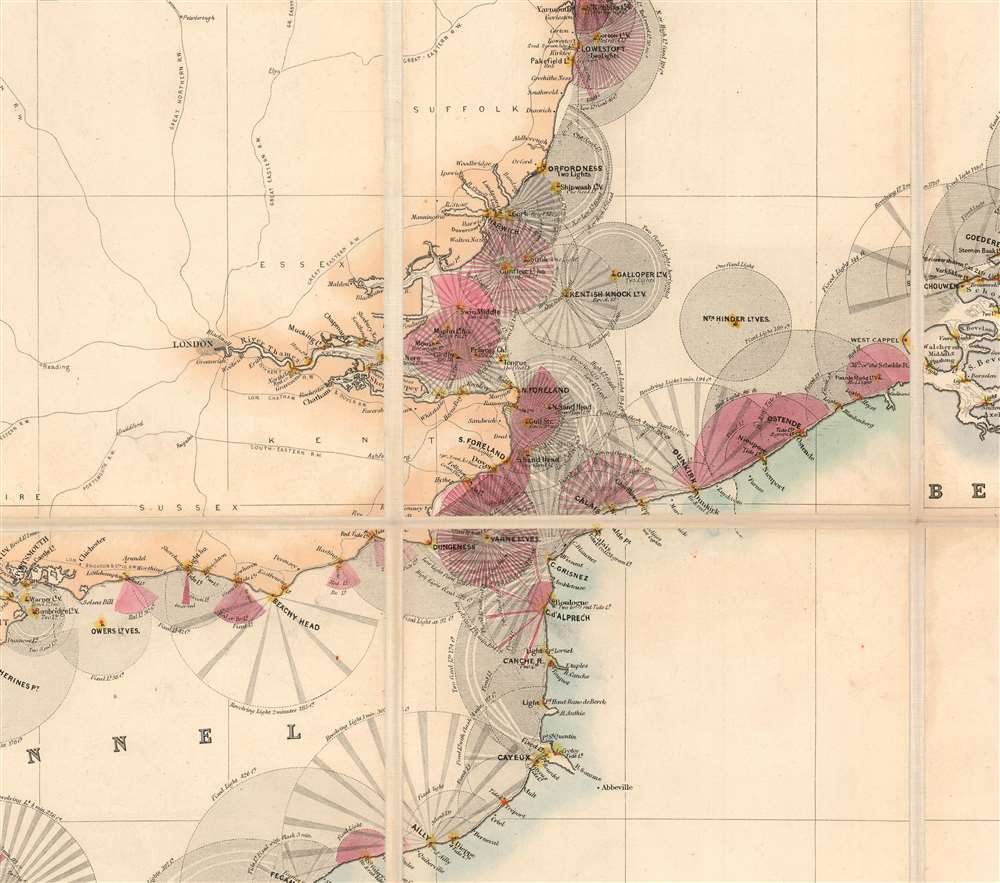 Beautiful and rare, an essential lighthouse guide for the British mariner.

An extraordinary 1863 chart and map exhibiting in great detail the lighthouses of Great Britain, including England, Ireland, Wales, and Scotland, and around the North Sea as far as Norway, Holland, France, and Denmark. The chart provides essential information for the mariner with regard to understanding and identifying the region's many lighthouses and what they communicate. In addition, the map illustrates the major regional railroads and their connections to major ports. The whole is impressively presented in a handsome presentation case with gilt stamped cover and brass closures.

The chart employs a sophisticated coding system to explain and identify various lights. Most striking here are the red lights, which in general represent 'Red Tide Lights' - bright red lights that are activated when there is sufficient clearance at high tide. Some of these are fixed lights - represented by solidly shaded rings. Others are rotating lights with regular pulses, here identified by alternating light and dark shading. In some cases, there are double lights, signified by two red dots, or lights that shine in a pulse within a fixed partial circumference.

One cannot help but notice the enormous visibility zone of the Barra Head Light, located at the southern top of the Hebrides, at the entrance to The Minch. The 58-foot (18-meter) stone tower, built in 1833, stands on the west side of Berra Head Island, on a high promontory, making the light the highest in the United Kingdom. It features a focal plane of 208 m (682 ft) above sea level and a range of 18 nautical miles (21 mi; 33 km).

This map was published on behalf of Trinity House, whose armorial crest, four ships in a cross formation, appears above the title. The Corporation of Trinity House, formally 'The Master Wardens and Assistants of the Guild Fraternity or Brotherhood of the most glorious and undivided Trinity and of St Clement in the Parish of Deptford Strond in the County of Kent', was created in 1514 by a Royal Charter of King Henry VIII. It is the official authority for lighthouses in England, Wales, the Channel Islands and Gibraltar. Trinity House is responsible for the provision and maintenance of lighthouses and other navigational aids, such as light-vessels, buoys, and maritime radio/satellite communication systems. It is also an official deep-sea pilotage authority, providing expert navigators for ships trading in Northern European waters.

This map was designed and engraved by Alexander George Findlay, and published by Richard Holmes Laurie on behalf of the Trinity House Corporation. Variations of this chart were published as early as 1833 - although in fact they were completely different maps, on a different scale, and engraved to different standards. The map is exceedingly scarce. The OCLC identifies three examples, those being held at the National Library of Scotland, the British Library at St. Pancras, and the University of Oxford. We are aware of a fourth example at the Royal Maritime Museum, Greenwich.