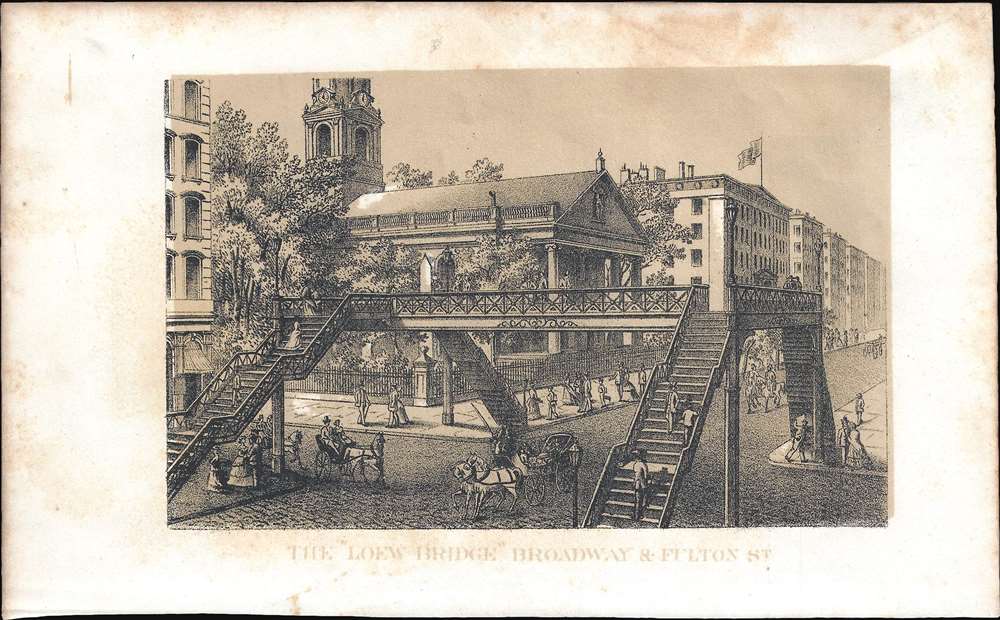 This is a lovely 1868 view of the Loew Bridge over Broadway and Fulton Street in New York City, by Shannon and Rogers. The view features the short-lived cast iron pedestrian bridge across New York City’s busiest street. Pedestrians are seen walking over the bridge and sidewalks with carriages on the street. St. Paul’s Chapel, which still exists today, can be seen on the corner. Astor House, the city’s first luxury hotel, is seen in the background.

The Loew bridge opened in 1867 after a petition from John Genin, a milliner, who wanted his customers to be able to visit his shop across form St. Paul's Chapel, in comfort. Unfortunately, the business of another hatter on the St. Paul's side of the street, Charles Knox, suffered due to the shadow cast by the bridge. Knox sued the city and the Loews Bridge was torn down in 1868, lasting only a year. Mary Eliza Tucker wrote a 65-stanza poem about the bridge called, ‘Loew’s Bridge: A Broadway Idyl’ in 1867.

Very good. Foxing throughout but especially in margins.

New York Public Library, Art and Picture Collection, b17515544.
Looking for a high-resolution scan of this?