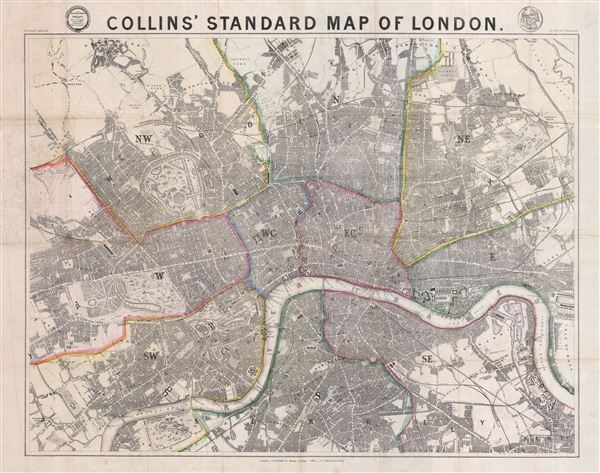 This is an extremely scarce 1856 plan or map of London, england by Henry George Collins. Centered on the Thames River, this map covers from Notting Hill and Kensington east as far as the West India Docks and from Holloway in the north to Camberwell in the south. The map is color coded according to districts with all parks, streets, rail lines, bridges, and important buildings noted. The map bears a stamp to the left of the title suggesting that the author, Collins, has received the 'Only medal awarded to england in the New York exhibition of Maps, Atlases, and Globes.' It is accompanied by its original linen binder containing a London street index.

Collins first published this map in 1855 as 'Collins' London.' He followed up with a second edition, the present example identifiable by the 'medal,' in 1856. Despite being a fine cartographer, Collins was a poor businessman and was forced into bankruptcy in 1857, when his map plates, including this one, were sold to edward Stanford. Stanford subsequently revised and published this map in over 30 editions well into the 1920s. Although the Stanford editions are relatively common, the first two editions, published directly by Collins, are exceedingly scarce due to a small print run and the aforementioned bankruptcy. They are also more colorful and beautifully produced than the more economically minded Sanford editions.

Henry George Collins (January 17, 1808 - c. 1871) was a British engraver, bookseller, and map publisher active in London from about 1832 to 1858. Collins started his career as a bookbinder but was ultimately unsuccessful in this field declaring bankruptcy in 1839. Later Collins worked as a stationer for William and Henry Rock who subsequently pressed charges against him for embezzlement - for which he was found guilty and served four months in prison. After being released Collins embraced a future in map publishing and established an office among London's printers at 22 Paternoster Row. He partnered with Anthony la Riviere (lithographer) and John Kelly (colorist) and began producing atlases, globes, and pocket maps, most of which focused on the London area. Despite producing fine maps, Collins was a poor businessman and sales were slow. This possibly explains the medallion appearing on many of his maps c. 1854 onward, where he claims to have received the "Only medal awarded to England in the New York Exhibition or Maps, Atlases, and Globes". This is a highly unlikely claim for which we can find no substantiation and was most likely a fiction intended to appeal to the American tourist market in London. Apparently it didn't work, for in 1857 he again declared bankruptcy, signing over most of his assets to George Chater and Ephraim Brain. Most of his map plates and printing stock were subsequently acquired by George Stanford who succeeded where Collins failed, publishing numerous editions of many of Collins' fine maps. Some of Collins' maps were also republished by his sons, under the imprint "Collins Brothers", but by 1859 this firm too had failed. The last known reference to Collins in 1871, where he referred to himself as a "retired publisher". He must have died shortly afterwards. (Worms, L. and Baynton-William, A., British Map Engravers, (London) 2011, p. 156 - 157). Learn More...

Very good. Some wear at original fold intersections. Cleanly detached from, but shipped with, original binder and accompanying booklet.