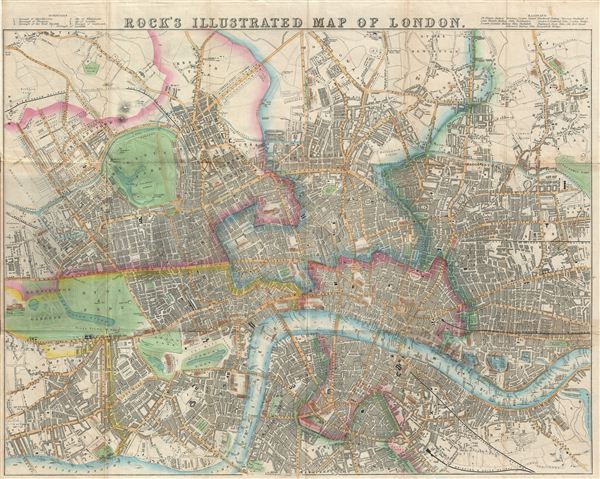 An appealing map of Victorian London issued by William Henry Rock in 1845. Centered on the River Thames River, Rock's beautifully produced map covers central London from Kensington Palace and Kensington Gardens to Victoria Park, the Grand Surrey Inner Dock, and Sun Tavern Fields. The map is rich with decorative embellishment and important buildings and monuments are rendered in profile. All streets are named as are rail lies, bridges, docks, stairs down the embankment, hospitals, etc. The River Thames teams with life and countless ships of all sizes. The map folds into its original linen binder.

William Henry Rock (fl. c. 1840 - 1860) was an English cartographer and publisher active in London during the middle part of the 19th century. Little is known of Rock's life and his corpus is small, consisting exclusively of pocket plans of London, Brighten, and other English tourist destinations. Learn More...