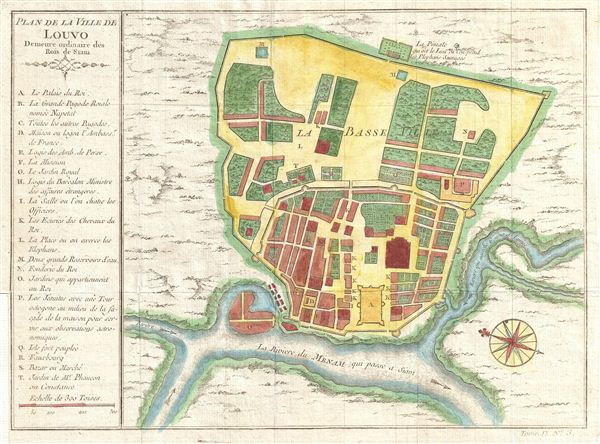 A beautifully detailed and engraved c. 1750 plan of the city of Louvo (Lopburi), the 'ordinary abode' of the kings of Siam (Thailand) on the Menam (Chao Phraya) River. An ancient center, LopBuri is described in Book III of Marco Polo's Travels, where it is called Locach. Later, in the 17th century, the securely fortified city, located just north of Ayutthaya, was established as a dry season capital of Siam. Though ostensibly dated 1750, Bellin's plan actually reflects the state of Lopburi during the reign of King Narai (1656-1688). The King of Siam frequently used the palace to host foreign dignitaries - as evidenced by the notation of various embassies including French, Persian, Jesuit, and Portuguese residences.