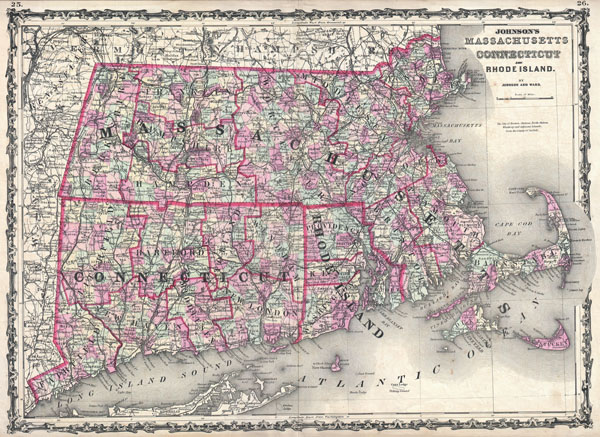 This is Johnson and Ward's 1862 map of Massachusetts, Connecticut and Rhode Island. This rare map offers a fascinating snapshot of these two New England states shortly following the outbreak of the American Civil War. Map shows all three states in full with bold and dramatic color coding according to county and district, also details transportation routes, especially roads, railroads, and canals. Includes parts of Long Island (East Hampton and Montauk) as well as Nantucket, Cape Cod and Martha's Vineyard. Features the strapwork style border common to Johnson's atlas work from 1860 to 1863. Steel plate engraving prepared by A. J. Johnson for publication as plates no. 25 and 26 in the 1862 edition of his New Illustrated Atlas… This is the first edition of the Johnson's Atlas to bear the Johnson & Ward imprint.