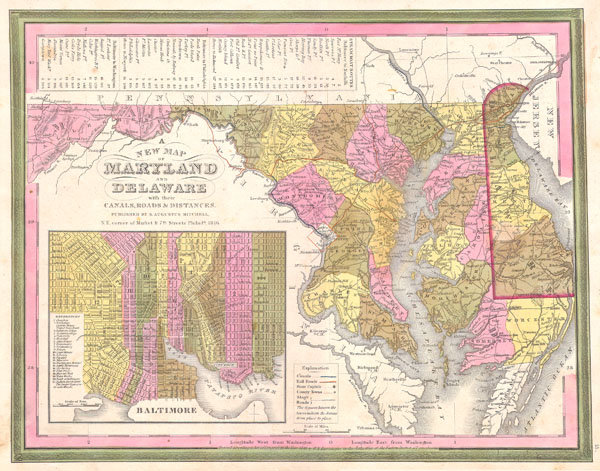 This scarce hand colored map is a lithographic engraving of Maryland and Delaware, dating to 1846 by the legendary American Mapmaker S.A. Mitchell, the elder. Includes a detailed inset map of Baltimore. This is a rare transitional map produced by the mysterious engraver H. N. Burroughs, whose work for the Mitchell firm appears in 1846 between that of H.S. Tanner and Mitchell himself. Ristow notes, 'Nothing is known about Burroughs, but he was undoubtedly an employee or associate of Mitchell.' His fine and detailed work appears only in the hard to find 1846 edition of the Mitchell's Atlas. Dated and copyrighted 1846.

H. N. Burroughs (fl. c. 1835 - c. 1860) was an engraver based in Pennsylvania and active in the early 19th century. Burroughs is an extremely elusive figure who work appears almost exclusively in conjunction with that of Henry Schenk Tanner and Samuel Augustus Mitchell (the elder). His name appears on the 1846 copyrights of many of Mitchell's earliest and most important atlas and pocket maps. Following 1846, Burroughs seems to have retired from cartography or changed careers. There are records of one H. N. Burroughs who owned a Pennsylvania coal mining company, and another who was president of a New York Bank. Whether or not these are the same individual is unknown. Learn More...

Very good condition. Minor discoloration around Annapolis and another near St. Johns Delaware.
Looking for a high-resolution scan of this?