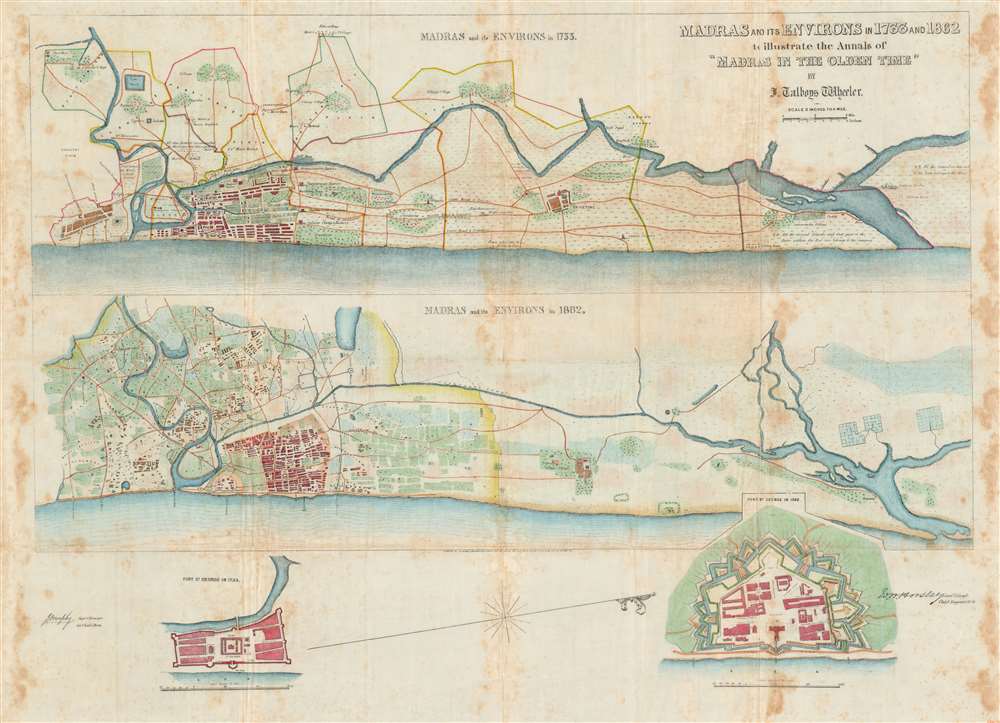 No examples catalogued in OCLC or visible on the market

This is a rare 1862 map of Madras in India, now known as Chennai. It was printed for James Talboys Wheeler for inclusion in his history of the Presidency of Madras. The sheet actually contains two full maps of the city and its surrounds - one dated to 1733, and the other showing the 'present day' city, revealing Madras' growth and the extensive development of the plain surrounding it.

This map appears to be quite rare. It was printed in Madras in 1862 for inclusion in the third volume of Wheeler's Madras In Olden Time. While the book itself is well represented in institutional collections, the map does not appear to have been frequently preserved. We have not seen any other examples of this map appear on the market, in auction records or dealers' catalogues.

James Talboys Wheeler (December 22 or 23, 1824 – January 13 1897) was a bureaucrat-historian of the British Raj, and one of the first European historians of India to rely on documentary sources. The son of a bookseller, he was privately educated, and first attempted an unsuccessful career as a publisher and bookseller himself before venturing into authorship of educational literature and editorial work. In 1858 he moved to Madras to become editor of the Madras Spectator in India; Later that year he was appointed professor of moral and mental philosophy at Madras Presidency College, and during his time there developed an interest in Hindu customs - of which he believed Europeans in India were largely ignorant. Wheeler would become a professional bureaucrat in the Indian Service, employed by the Raj government in Madras, and later in Calcutta and British Burma. During his time in Madras, he would produce his  Madras in the Olden Time, a history based on the wealth of government records made accessible to him through his work; the first chapters would be published serially in the Madras Spectator. He produced a number of summary reports relating to the history and politics of countries that bordered on British India for the government during his time in Calcutta; beyond his bureaucratic work, he would write a four-volume History of India, which was published between 1867 and 1881. Learn More...

Wheeler, J. T. Madras in the Olden Time: being a history of the presidency from the first foundation of Fort St. George to the occupation of Madras by the French, 1639-1748(Graves, Madras) 1862.

Very good condition. Lithograph with original hand color, printed on waxed silk. Some staining, original folds visible. No mends or loss.
Looking for a high-resolution scan of this?