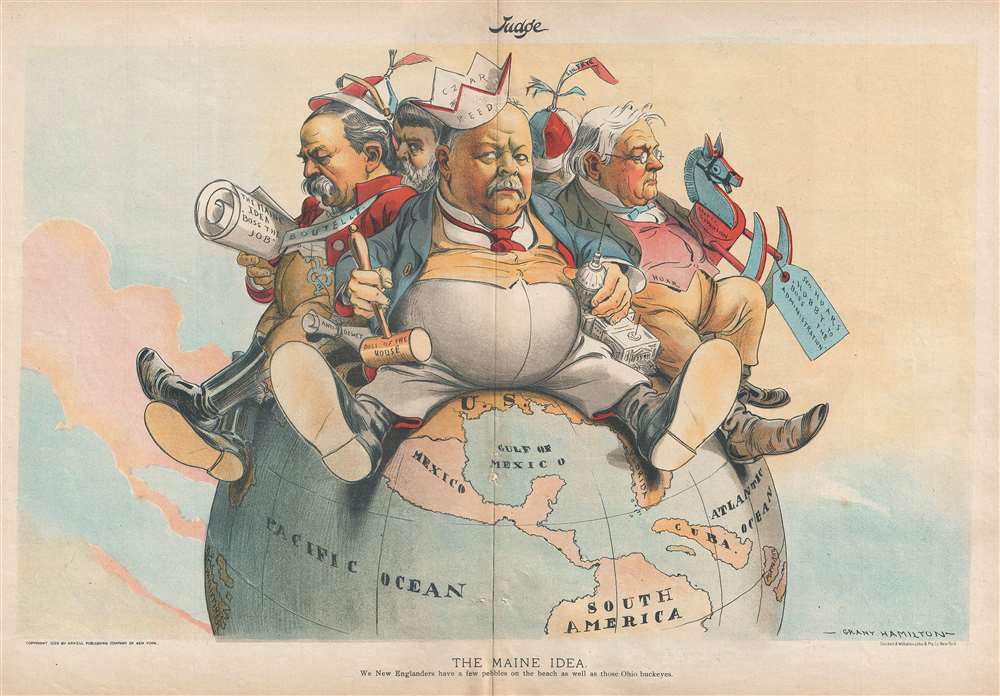 An ardently pro-McKinley and pro-expansionism political cartoon from just after the Spanish-American War.

This is an 1899 Grant Hamilton political cartoon lambasting four New England Republican Congressmen for their opposition to the Spanish-American War, portraying each as a child sitting on top of the world. Three of the Congressmen hailed from the state of Maine: Representative Thomas Reed, Representative Charles Boutelle, and Senator William Frye. Senator George Hoar was from Massachusetts.

A Look at the Four Identified Congressmen

Each of these men opposed American involvement in the Spanish-American war and American expansionism for their own reasons. Representative Reed, sometimes ridiculed as Czar Reed, held the position of Speaker of the House of Representatives two separate times, from 1889 - 1891 and from 1895 - 1899. Reed had supported President McKinley's efforts to avoid war with Spain, but when McKinley changed his position to supporting the war, Reed refused to change his position. He opposed the President and, having lost the battle, resigned from both the speakership and his seat in Congress.

It is not entirely clear why Representative Boutelle opposed the war, but, from what Hamilton wrote in this cartoon, it may have been out of loyalty to Speaker Reed. The phrase 'Boss the Job' most likely refers to Reed, who Hamilton refers to as the 'Boss of the House'. Hamilton also has a paper tied to Boutelle that reads 'Anti-Dewey', the Navy Admiral who had won the decisive battle in Manila Bay and was now talked about as a possible front-runner for the presidency. This opposition to Dewey may also be why Boutelle is included here.

Senator Hoar, however, was radically anti-expansion (as is written here on his 'hobby horse'), even to the extent that he met with native Hawaiians who opposed the annexation of Hawaii before that vote in the Senate.

It is also unclear why Senator Frye is included in this cartoon, as he was a member of the American delegation that went to Paris to negotiate the treaty that ended the Spanish-American War. Perhaps he also is included because of his association with Reed, but history has hidden the exact reason.

This cartoon was drawn by Grant Hamilton and published in the Mach 25, 1899 issue of Judge.

Hamilton, G. 'The Maine Idea.' Judge Vo. 36 No. 910, March 25, 1899 (New York: Judge Publishing Company).     Judge (1881 - 1947) was a weekly satirical magazine published in the United States. The first issue was first printed on October 29, 1881 and was only sixteen pages long. Judge was launched by James Albert Wales, Frank Tousey, and George H. Jessop, who had previously worked for its rival magazine Puck. In the mid-1880s, William J. Arkell purchased the magazine, which was having difficulty competing with Puck. Arkell, taking advantage of his considerable wealth, persuaded cartoonists Eugene Zimmermann and Bernhard Gillam to leave Puck and join the staff at Judge. As Arkell was a supporter of the Republican Party, Judge soon became a platform for criticizing the Democratic administration of Grover Cleveland, which was blamed for the Panic of 1893, among other issues. With support from the Republican Party, Judge saw a rise in popularity during the 1880s and 90s, surpassing Puck in both content and circulation. Judge also widely supported the candidacy of William McKinley, largely through the work of cartoonists Victor Gillam and Grant E. Hamilton. Judge reached its peak circulation of around 100,000 by 1912. One of its former editors, Harold Ross, used his experience at the magazine to launch his own publication, The New Yorker in 1925, which quickly began to compete with Judge. Due to the success of The New Yorker and the Great Depression, Judge became a monthly is 1932 and ceased circulation in 1947.