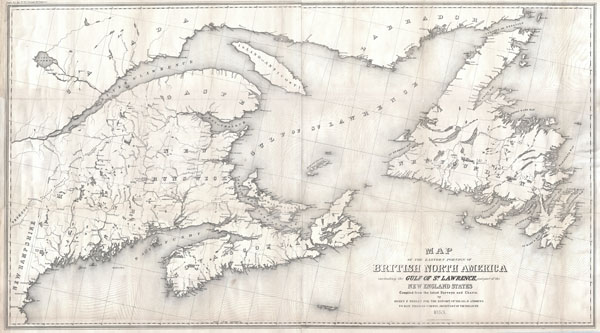 Map of the Eastern Portion of British North America including the Gulf of St. Lawrence, and part of the New England States Compiled from the latest Surveys and Charts, by Henry F. Perley for the Report of Israel D. Andrews, to Hon. Thomas Corwin, Secretary of the Treasury.
1853 (dated)     26 x 47 in (66.04 x 119.38 cm)

A rare, beautiful and gigantic map of the Canadian Maritime Provinces of New Brunswick, Nova Scotia, Newfoundland and Prince Edwards Island. Also includes much of Quebec and parts of New York and New England. Depicts from Quebec City and the mouth of the St. Lawrence River eastward to the Maritime Provinces. Offers magnificient detail with regard to the towns, cities, and rivers systems of this area. Prepared by Henry Pearley for Israel D. Andrews' Report to the Secretary of the Treasury.

Israel de Wolf Andrews was the Consul of the United States for Canada and New Brunswick from 1851 - 1854. Little else is known about this elusive figure.


Henry F. Perley (1831 - July 15, 1897) was a Canadian surveyor and engineer working in the later part of the 19th century. His parents were Moses Henry Perley and Jane (Ketchum) Perley at St. John, New Brunswick, Canada. Perley attended Kings College of Engineering, which is today the University of New Brunswick, Canada. Pearly entered public service in 1848, and was employed up to the summer of 1852 in the exploratory surveys for a proposed system of railroads. In the fall of 1852, he became employed by Messrs. Petto, Betts, and Brassy on surveys in New Brunswick and Nova Scotia and remained with the firm until 1856 working on the construction of the Grand Trunk Railway. He left the firm in 1856 to again work for the public good, working as the Resident Engineer on the European and North American Railway between St. John and Shellac, a position which he held until the line was finished in 1860. Perley engaged in private practice from 1861 until 1863. In May 1863, Perley entered the service of the Government of Nova Scotia, working as Provincial Engineer until August 1865, when he resigned to accept a position with Messrs. Kelk, Waring Brothers, and Lucas, who were contractors for the construction of the Metropolitan Extension (underground) Railway, London, England. After completing this project, Perley returned to New Brunswick, and took charge of work in connection with improving the freighting facilities of the Government railways of the province and the construction of the deep water terminus and extension line at St. John. In May 872, Perley was appointed the Engineer in charge of harbors, etc., in the Maritime Provinces for the Department of Public Works, a position he held until the end of 1879, when he was named Chief Engineer of Public Works. Perley retired in 1891, only to be reemployed by the Department of Public Works as an Engineer, a position he held until his death. He worked as the Chief Engineer of the 800 meter St. Peter's Canal, on Cape Breton Island, and also designed the dry dock in Kingston, Ontario and docks in British Columbia, among many other important Canadian engineering projects.

Communication from the Secretary of the Treasury, transmitting in compliance with a resolution of the Senate of March 8, 1851, the Report of Israel D. Andrews, consul of the United States for Canada and New Brunswick on the Trade and Commerce of the British North American Colonies, and upon the Trade of the Great Lakes and Rivers; also, notices of the internal imporvements in each state, of the Gulf of Mexico and the Straits of Florida, and a Paper on the Cotton Crop of the United States., (1853 editon).

Univesity of Delaware, Box 1 Folder 3, 03001 h. Stevens, Henry, Catalogue of the American Books in the Library of the British Museum at Christmas MDCCCLVI, p. 5.
Looking for a high-resolution scan of this?